"The Crucible" a Stunning Parable of McCarthyism's Attack on America

A crucible is a pot in which metals or other substances are heated to a very high temperature or melted. Miller's story is about events that took place in Salem, Massachusetts in 1692. But it's really about the House Un-American Activities Committee (HUAC), America's thought police of the early 50s, which burned through American rights and professed values. It's the best play of the season.(Closes July 17, 2016) 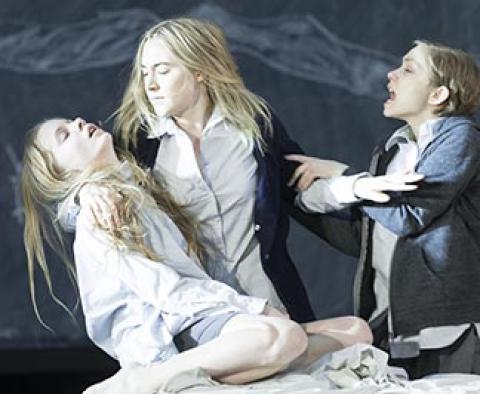 Elizabeth Teeter as Betty, Saoirse Ronan as Abigail and Tavi Gevinson as Mary Warren,, Photo Credit: Jan Versweyveld. // The Komisar Scoop
Arthur Miller's brilliant parable of the Sen. Joseph McCarthy attack on American liberties, allowed by the U.S. Congress till it became too obscene for even cowardly politicians to stomach, is brilliantly staged by Ivo Van Hove, a Dutchman who understands and communicates Miller's political message (see also his "A View From the Bridge") in a theatrical manner that makes politics into art.
A crucible is a pot in which metals or other substances are heated to a very high temperature or melted. Miller's story is about events that took place in Salem, Massachusetts in 1692. But it's really about the House Un-American Activities Committee (HUAC), America's thought police of the early 50s, which burned through American rights and professed values.
Using a metaphor of real events some 260 years earlier, it tells of accusations without evidence that were used to damn the innocent. They occurred during the Salem witch trials in the Massachusetts Bay Colony, 1692-93.
Young girls are dancing in the forest. When they come out, Betty Parris (Elizabeth Teeter), daughter of the preacher Samuel Parris (Jason Butler Harner), faints. The others are hysterical. The dress, by the way, is modern.
Wealthy citizen Thomas Putnam (Tomas Jay Ryan) declares that a hurtful spirit is laying hands on these children. His wife Ann (Tina Benko) claims she is a victim, that seven of her newborn babies died. Relevant later, Putnam also has a land dispute with Giles Corey (Jim Norton), another townsman. In these things, there are always background interests.
Parris will invite Rev. John Hale, an expert in witchcraft, to investigate. But John Proctor (the excellent Ben Whishaw), a farmer and Quaker, refuses to accept the notion of witchcraft. He says Parris should have consulted with the townspeople before taking that step. 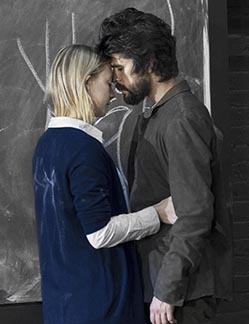 Saoirse Ronan as Abigail and Ben Whishaw as John Proctor,
Photo Credit: Jan Versweyveld. // The Komisar Scoop
The back story is that one of the young girls, Abigail (Saoirse Rona), is a troublemaker and a seducer. She had an affair with John and was fired by his wife Elizabeth (a fine Sophie Okonedo), who discovered it. Abigail is the vengeful lover scorned.
Meanwhile, Rev. Parris is complaining that he hasn't gotten the firewood promised by the congregation for his service. As a graduate of Harvard, he is not paid enough! To locate Parris even more inside the amoral corporate sensibility, this is a fellow who measures his worth by money.
Many of the characters have axes to grind, (appropriate metaphor for the times.) Proctor, our hero, declares, "Is it the Devil's fault that a man cannot say you good morning without you clap him for defamation?"
As the investigation proceeds, Abigail claims that Tituba (Jenny Jules), a Barbadian slave, forced her to drink blood. Tituba ripostes that Abigail asked her to call up a curse. When Parris threatens Tituba with death for turning her witchcraft on the girls, she "confesses" that they have all been bewitched by the devil. And she points to the deviltry of two townswomen who Hale promptly arrests. Organized hysteria based on the girls' charges escalates till close to 40 people are arrested for witchcraft. 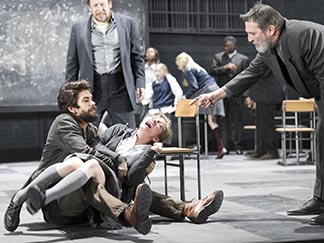 Ben Whishaw as John, Tavi Gevinson as Mary Warren, the family maid, and cast,
Photo Credit: Jan Versweyveld. // The Komisar Scoop
All a lie of course, as Abigail had admitted to John. And then Elizabeth is accused. John is afraid to expose Abigail for fear his adultery will be revealed. Mary, the Proctors' maid, tells John the girls are lying, then accused of witchcraft herself, recants. The town is ruled by fear.
Corey's wife is arrested because he had reported that she read strange books. (In the 1600s? Transpose that to 1950s leftist texts that challenged ruling orthodoxy or power.) By then, 91 are accused. Then more than 100. Their lands are taken, some imprisoned, some executed. When John is called to testify against others to save himself, he refuses to name names. "Naming names" before HUAC meant naming people who had attended leftist meetings. The courageous refused; the cowardly did as ordered.
We see tortured figures, red on darkened faces and backs, movements that are terrific, furious. 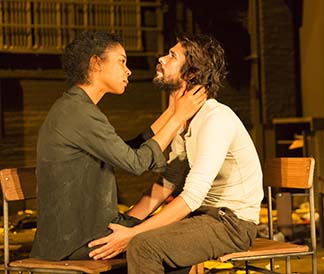 Sophie Okonedo as Elizabeth Proctor and Ben Whishaw as John,
Photo Credit: Jan Versweyveld. // The Komisar Scoop
Of course, this is a stunning morality play, of some people with ulterior motives, of others stupidly superstitious, and of victims unable to organize against the predators. Later, the charges would be acknowledged as lies, and Parris would be removed as Salem's preacher. As  McCarthy would finally be censured by the Senate.
It's the best play of the season.
"The Crucible."  Written by Arthur Miller, directed by Ivo Van Hove. Walter Kerr Theatre, 219 West 48th Street, New York City. (877) 250-2929. Opened March 31, 2016; closes July 17, 2016.
[Lucy Komisar's beat is the secret underbelly of the global financial system - offshore bank and corporate secrecy - and its links to corporate crime; tax evasion by the corporations and the very rich; empowerment of dictators and oligarchs; bribery and corruption; drug and arms trafficking; and terrorism. Her articles on the subject since 1997 have appeared in publications as diverse as The Nation magazine and the Wall Street Journal. She is also a theater critic and member of The Drama Desk, the organization of New York theater critics, writers and editors. Her particular interest is the political aspects of theater.]
Thanks to the author for sending her review to Portside.