If unions find better strategic partners outside the labor movement on a particular issue, they should proceed on the basis of their analysis of what is needed, not hold back and wait for labor unity. Too often a particular union’s political stance may reflect a private employer’s growth plans, not the general good for working people. 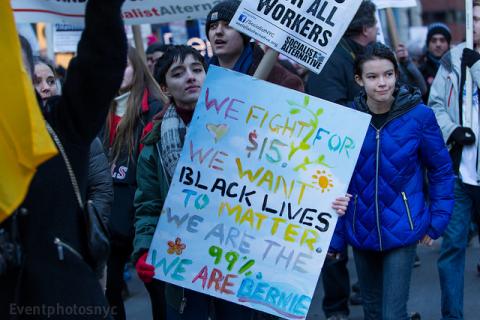 Sanders' campaign suggests that progressives, even identifying as socialists, could run for offices and win, not by hiding their views but by articulating them. , EventPhotosNYC/ Flickr

If the Democratic National Convention is not sufficiently amusing in its own right—following a week of Republicans wracked by self-centered dissent and absenteeism, plagiarism from Michelle Obama and the specter of Lucifer guiding Hillary Clinton—you can enliven the evenings with an educational game: What would these conventions be like if Bernie Sanders were the Democratic candidate?

That question may be especially instructive for union members and supporters who saw him as the most pro-labor major candidate in ages. Even if Sanders is never a presidential candidate again, what could labor political strategists learn from his campaign that might strengthen their hand in the next round?

After all, he was one of the most pro-union and progressive members of Congress. And, despite his lack of widespread public recognition, he ran a very strong campaign against one of the best-known women in the world and the darling of both party insiders and wealthy contributors.

Moreover, Sanders did it by mobilizing small contributors and grassroots activists, bringing movement methods to an electoral campaign. He told supporters that real change came from their organizing and forcefully pressing their demands, not simply trusting leaders or emulating Republican fundraising and hoping that it would not result in Republican-like policies. Labeling his program as socialist did not seem to hurt Sanders much and even helped him with a remarkably large number of voters, especially the younger ones.

Although there are problems comparing results that lump primary and general election votes together, it’s still remarkable that Sanders received more than 13 million votes in the primaries—the most won in terms of either percentage or absolute numbers by any socialist in American history.

His campaign suggests that more progressives, even identifying as socialists, could run for offices and win, not by hiding their views but by clearly articulating them.

Sanders provided a coherent, persuasive account of what had gone wrong in recent decades for the vast majority of Americans, as the power and wealth of the top 1 percent grew enormously. He described contemporary America in terms of a political class conflict centered on a clash between the narrow elite and an alliance of working class and middle class voters on economic as well as social issues.

He also appealed to voters at all levels of education, providing an effective challenge to the right-wing “populism” that Donald Trump seems to be using so effectively to pull increasing numbers of white, working class voters—even union members—away from the Democrats.

“Bernie’s agenda is a vision that could create a better America,” he said. “One of my criticisms of the labor movement is that we take on one fight at a time, not comprehensive issues.”

Sanders tried to demonstrate how a combination of policies he advocated and popular engagement could solve problems people readily recognize. By doing so within the Democratic Party, his proposals more readily gained some legitimacy or seemed safer to many voters.

Although Sanders had steadfastly refused to run as a Democrat throughout his career, he caucused with them for purposes of organizing House affairs and formulating Congressional Progressive Caucus strategy. Now, ironically, he came close to demonstrating the possibilities for socialists to win through Democratic primaries.

But, especially if self-identified socialists or progressives make up only a minority in a mass, moderately social democratic party (like the Democrats), they need an organization of their own within the party. Such a group might resemble a socialist version of the liberal Americans for Democratic Action that was a strong influence in the years after World War II, or democratic socialist Michael Harrington’s Democratic Agenda, which started in 1976. It could operate when needed outside of Democratic Party strictures to mobilize support for left-wing strategies.

In recent decades, there have been challengers to the Democratic establishment with different approaches and different organizational legacies: Think of the various campaigns outside the Democratic Party by Ralph Nader and Barry Commoner in progressive third parties, or the maverick third-party effort of businessman Ross Perot that criticized trade agreements like NAFTA in ways that appealed to elements of both parties, or Rev. Jesse Jackson’s campaigns for president within the Democratic Party.

The Green Party, which can typically count on about 1 percent of presidential votes, supported Nader, but the vehicle for Commoner—the Citizens Party—soon faded, as did Perot’s party after a second failed bid. Jackson never devoted the energy to make his National Rainbow Coalition into a strong organization either within or outside the Democratic Party, but it provided him a national platform.

Although most of these attempts did not succeed in creating vital organizations, Howard Dean’s brief primary campaign did much better with the still ongoing, internal, progressive group, Democracy for America.

The strongest of the alternative party organizations is the Working Families Party, which started in and is still strongest in New York.  A proponent of the so-called fusion strategy, the Working Families Party has its own line on the ballot but in practice mainly endorses Democrats who are relatively progressive and pro-labor. It has spread to a total of 13 states, but its influence is generally greatest at the lowest ranks on the ballot.

Only time will tell how Sanders’ group will fare.

He announced recently that he plans to launch an organization—Our Revolution—that would help recruit, train, and raise funds for candidates. About 24,000 individuals have already contacted the campaign about running for office or helping others, according to USA Today, many at the state and local levels, where Democrats have lost ground.

Now it is shutting down, says volunteer organizer Rand Wilson, but the group could still serve as a base for future organizing. By promoting Sanders’ ideas, it helped make more class conscious political discussion possible within union ranks.

Most Labor for Bernie members are likely to agree with Wilson that despite its small base, the organization gave a hint at what’s possible.

“Labor had an opportunity to get behind a serious candidate for the working class,” he says, “and you can see what more could have happened if Bernie had been endorsed (by the broader labor movement).”

Cohen has come to a dramatic conclusion about traditional labor movement policy: After decades of taking seriously the idea that labor unions should try to reach common agreement on political issues, he has decided that if unions find better strategic partners outside the labor movement on a particular issue, they should proceed on the basis of their analysis of what is needed, not hold back and wait for labor unity. Too often, he says, a particular union’s political stance may reflect a private employer’s growth plans, not the general good for working people.

Following this strategy, “on the picket line there would be unity, and everyone would stand with a union on strike,” he says, “but not necessarily focus on unity about political strategy.”

RoseAnn DeMoro, executive director of NNU and a vigorous advocate for Sanders, says the labor movement now sees itself as non-partisan.

“My advice is we should see ourselves as representatives of the working class—not the executive class, not the neo-liberals,” she says.

DeMoro said the Democrats rejected (or in some cases, such as tuition-free college for all, watered down) Sanders’ leading proposals, such as expanded Medicare and Social Security, a ban on fracking and a “Robin Hood” tax, which is a tax on financial transactions.

In any case, she says, even the compromise 2016 Democratic Party platform is not binding on candidates.

“Assuming the Democrats win,” she said, “we have essentially negotiated down from our principles in advance—basically negotiating with ourselves. If we bargained our contracts that way, the nurses would fire us.”

“Labor is out of touch with its base,” DeMoro says. “Members are where Bernie was. Labor should have listened to Bernie.”

Randi Weingarten, president of the American Federation of Teachers, the first union to endorse Clinton, believes that Sanders had a positive influence on the debate that resulted in the Democratic Party adopting what she, unlike DeMoro, describes as “a platform that’s the most progressive in history.”

“Bernie gave voice to millions who feel left out or left behind, especially young people,” she said, “but he certainly is not the only one who spoke truth to power.

“This is the first generation in our history that might be worse off than the generation before. And rather than being mired in frustration, Bernie inspired them to act. And that’s been a great gift to all of us,” said Weingarten.

Bob Master, political director for CWA in New York and co-chair of the Working Families Party, saw some of the same inspiration but also some disappointments.

He was not surprised at the upwelling of union member support for “a new brand of radical oppositional politics,” nor at the lack of such enthusiasm from many labor leaders for “the first politician in many years who so clearly articulated a class-based attack on the prevailing order.”

It was important, Master argues, that Sanders linked his varied reforms together as representing “socialism,” thus “open(ing) the social and political imagination to dreams of real alternatives.

“This ideological reorientation is far more important to the possibility of reviving the labor movement than most labor leaders would acknowledge,” said Master.

“How much more seismic would his campaign have been if even a handful of other major unions had joined the cause, creating greater credibility, providing additional resources, and perhaps helping to establish, most importantly, more organic connections to workers of color?”

How much more indeed?

David Moberg, a senior editor of In These Times, has been on the staff of the magazine since it began publishing in 1976. Before joiningIn These Times, he completed his work for a Ph.D. in anthropology at the University of Chicago and worked for Newsweek. He has received fellowships from the John D. and Catherine T. MacArthur Foundation and the Nation Institute for research on the new global economy. He can be reached at davidmoberg@inthesetimes.com.