AARP, the non-profit seniors organization that exists to promote the financial security, pensions and healthcare of those over 50, is secretly funding the American Legislative Exchange Council (ALEC), an organization whose bills have acted against the interests of ordinary Americans, including retirees and their families. What can you do? -- sign the petition below. 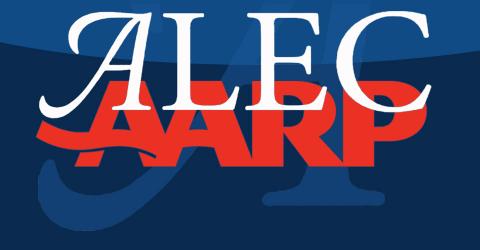 AARP isn’t exactly hiding its new financial relationship with ALEC, at least to ALEC legislators. Its logo appears in the conference brochure (see below) and attendees at the conference were each provided with an AARP branded portable USB power pack as they registered for the event.

ALEC exists to help its corporate funders advance their lobbying agenda through pushing bills that ALEC peddles as national “model” legislation. As CMD has documented in numerous ways, ALEC is a pay-to-play operation.

Since CMD launched ALECexposed in 2011, more than 100 corporations have quit the group, with many echoing Eric Schmidt of Google who told NPR as his company quit ALEC: “I think the consensus within the company was that that was some sort of mistake and so we’re trying to not do that in the future.”

Here are just five (of the many) ways ALEC has acted against the interests of retirees and AARP members:

1) For more than a decade ALEC peddled a proposal to privatize key tax revenue for Social Security, which would undermine this crucial insurance program.

When it comes to social security, ALEC has cried wolf about the financial soundness of social security, proclaiming as recently as June 2016 that “leadership to reduce the debt must take place soon to prevent Social Security’s insolvency in fewer than 20 years.”

Such hyperbole is typical of ALEC, which fails to acknowledge that such “insolvency” could easily be fixed by lifting the Social Security Payroll tax earnings cap, currently set at $118,500.

ALEC’s go-to solution to future potential shortfalls has been to privatize a portion of the tax revenue that would otherwise fund Social Security Insurance by putting it into private accounts.

In its “Resolution Urging Congress To Modernize the Social Security System With Personal Retirement Accounts (PRA’s),” which corporate lobbyists voted on with legislators on its task force in secret in May 2000, ALEC claimed that “Social Security tax revenues alone will be insufficient to pay current benefits as early as the year 2015.”

Yet as of 2016, despite these prognostications, social security remains healthy, solvent and wildly popular with the American public. It’s no wonder that ALEC quietly has sought to distance itself from this long-standing “model” resolution by removing it from its website.

Such privatization schemes have been promoted by ALEC’s billionaire funders, the Koch Brothers. Charles Koch began attacking Social Security way back in the 1970s through his Cato Institute and David Koch ran on that policy in 1980. Koch-backed groups like ALEC have sought to privatize Social Security in a variety of ways.

ALEC has spread propaganda about Social Security to thousands of state legislators over several years, including through its proposal to take significant tax revenue out of the Social Security system as a guise to saving it, which would actually collapse the program.

But AARP is now funding ALEC.

ALEC has used straw man arguments like claiming that the bankruptcy of Detroit was primarily caused by public pension insolvency and “should serve as a lesson” for lawmakers about pension agreements.

But as documented by DEMOS and others, “Detroit’s bankruptcy was caused by a decrease in tax revenue due to a population decline and long-term unemployment, not an increase in the obligations to fund pensions.”

As with its history of peddling of myths about Social Security along with its laughably inaccurate economic state “report cards,” ALEC routinely uses bad math to shill for the agenda of its bankrollers, like the extremist billionaire Koch Brothers, an approach predicated on the organization’s obedience to its pledge to never raise taxes, particularly on wealthy individuals and corporations (who not coincidentally fund ALEC).

3) ALEC has sought to amend the Constitution to pass a “Balanced Budget Amendment,” which would destroy our economy and result in drastic cuts to discretionary government programs that help people’s lives.

As noted by CMD, the passage of such an amendment would constitute a massive threat to fiscal stability. Economists like Dean Baker warn that a balanced budget amendment would radically alter Social Security and Medicare, and would fundamentally limit the federal government’s ability to respond to economic challenges and opportunities.

4)  ALEC bills would undermine Medicare and it continues to attack the Affordable Care Act, despite its protections for millions of Americans including Americans with pre-existing conditions, like AARP members who are not yet retirement age.

As noted by the healthcare industry whistleblower and CMD Fellow Wendell Potter in 2011, “ALEC has been at work for more than a decade on what amounts to a comprehensive wish list for insurers: from turning over the Medicare and Medicaid programs to them – assuring them a vast new stream of revenue – to letting insurers continue marketing substandard yet highly profitable policies while giving them protection from litigation.”

5)  ALEC seeks to restrict limits on drug price gouging and aids its big donor, Big Pharma, in other ways.

Time and again, ALEC has supported model policies that benefit the bottom lines of pharmaceutical companies, like the organization’s “Drug Liability Act,” which would exempt drug makers from any punitive damages liability for the potential harms caused by their products if those products were previously approved by the Federal Food and Drug Administration.

Similarly, ALEC has opposed efforts to give Americans access to more affordable medications from Canada.

ALEC has even supported limits on non-pecuniary damages when a corporation is liable, meaning that someone who is retired and cannot show lost income can receive lesser damages for pain and suffering. ALEC’s bill on this was applied by ALEC legislators in Wisconsin to lawsuits against nursing homes to limit their payouts to victims of nursing home neglect or mistreatment who prove that the skilled nursing industry’s practices harmed them or their beloved parents or grandparents. 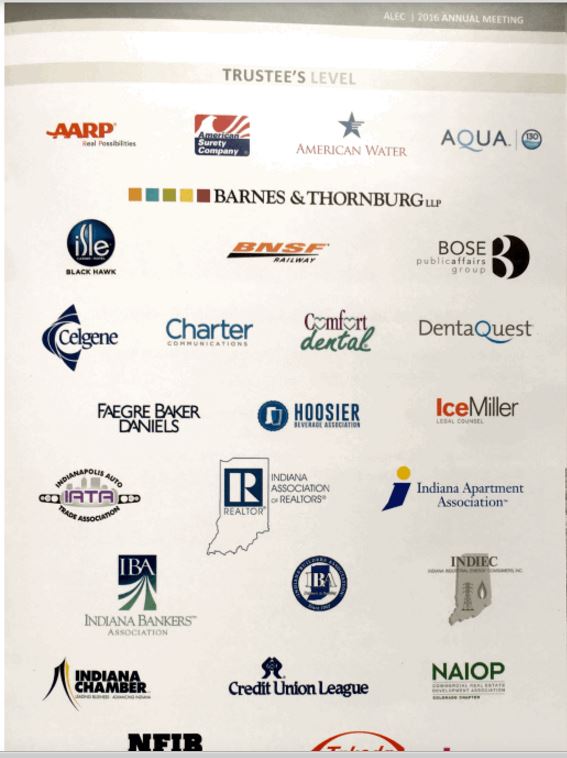 These are just a few of the many ways ALEC legislation hurts Americans, in addition to its legacy of making it harder for Americans to vote and thwarting efforts to address climate changes that are harming our planet and our families and future.

CMD has launched a petition, calling on AARP to stop funding ALEC. You can sign the petition here.

[Nick Surgey is CMD's Director of Research and an investigative reporter.
Calvin Sloan is a researcher and multimedia specialist with CMD.
CMD's Lisa Graves contributed to this report.]
Tell AARP: End All Ties With ALEC Immediately!
By Michael Phelan
August 4, 2016
Social Security Works
AARP's stated mission is to represent the interests of retirees. That's why we were shocked and angered to learn that AARP has been secretly funding the right-wing, anti-retiree American Legislative Exchange Council (ALEC) since 2014.
ALEC's agenda includes many proposals that would be a nightmare for seniors, including privatizing Social Security, gutting pension plans, and turning Medicare over to insurance companies. ALEC also supports laws that would make prescription drug prices even higher - no surprise since giant pharmaceutical corporations are one of ALEC's biggest donors.
Join us in calling on AARP to end its financial support of ALEC and repudiate the group.
To: AARP
ALEC is an anti-senior organization, with positions so extreme that corporations like Google, Facebook, and Microsoft have ended all ties with the group. No group that claims to represent retirees should work with ALEC in any form or fashion. We demand that you cease funding ALEC and immediately end all ties with them.
Click here to sign. 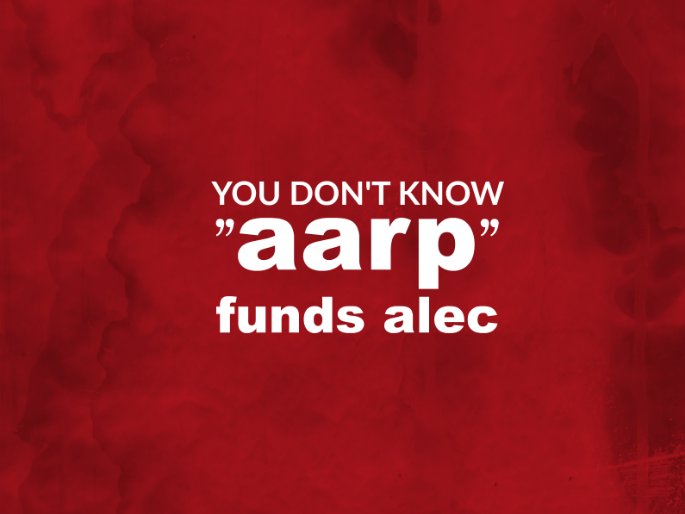 credit - theLisaGraves
AARP Explains Itself and ALEC
Re: ALEC and AARP
By AARP Online Community Team
August 2, 2016
AARP Online Community
To all who have participated in this discussion thread:
Being non-partisan means interacting with organizations on all sides of key issues - not just those whose views are identical to your own.  AARP is committed to serving a diverse membership and fulfilling our responsibility to engage with groups and individuals with different perspectives on issues important to the 50+ and their families.
In 2016, AARP paid a fee to ALEC, which gave us an opportunity to engage with state legislators and advance our members' priorities from a position of strength at ALEC's annual meeting.
AARP's engagement with ALEC is NOT an endorsement of the organization's policies either past or present. As is the case with other groups AARP engages with, there are many issues and areas where we strongly disagree with ALEC's position or approach.
For example, AARP does NOT support ALEC's model legislation on TABOR (Taxpayer Bill of Rights); a Constitutional Amendment for a Balanced Federal Budget, which is a direct attack on Social Security, Medicare and Medicaid; the repeal of the Affordable Care Act; nor the other model legislation posted on its website. AARP has advocated in opposition of these proposals in the states and in Congress and will continue to do so.
AARP monitors and values member input and we have taken note of all your comments.
Our goal is that all of our activities will come together to help shape and enrich the experience of aging for our members and for America.
AARP Online Community Team