In North Dakota the largest gathering of Native people in opposition to the construction of a massive pipeline project is now going on near the Standing Rock Indian Reservation. The project threatens the only water supply for the impoverished reservation and adversely affects the quality of life for Indian and non-Indian people in the area. Private security with vicious dogs have been used against protesters. Join the Sept. 13 national day of action against the pipeline 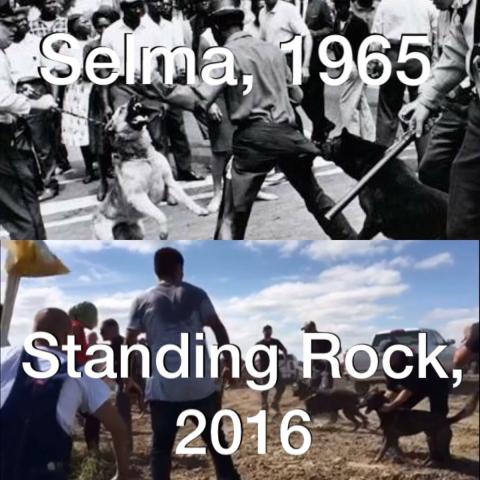 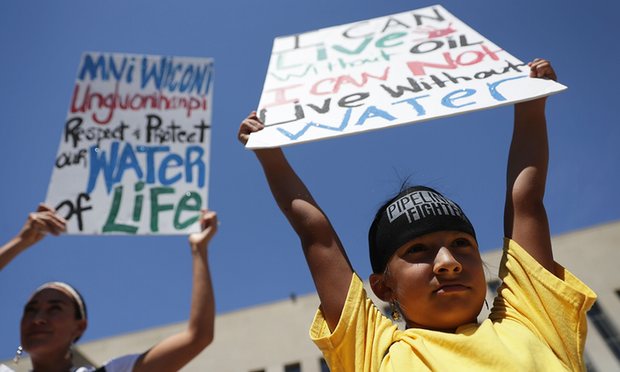 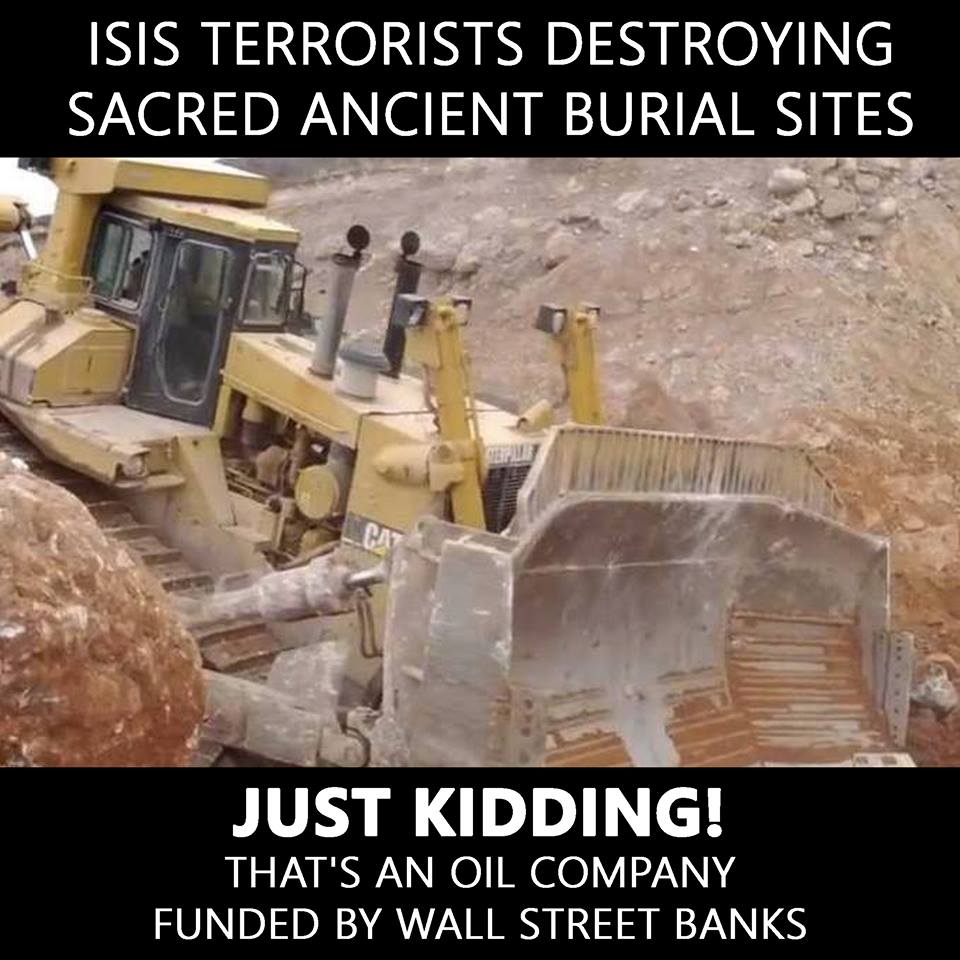 Credit: The Other 98%
In my column, "The Dakota Access Pipeline and the Law of Christendom," I quoted Judge Catron of the Supreme Court of Tennessee, "Our claim is based on the right to coerce obedience" which, he asserted, is the "law of the land" used by the United States against our Original Nations.
On September 3, 2016, we saw an excellent illustration of a claimed right to coerce our nations into obedience: Private security personnel of Energy Transfer Partners using vicious dogs and pepper spray against Native people (women, children, and men), and non-Native opponents of the Dakota Access Pipeline (DAPL) near Cannonball, North Dakota.
The contrast between the Oceti Sakowin's prayerful path of the Sacred Pipe, which seeks to protect the precious waters of Mother Earth, her life blood, and the greed-driven path of the Crude Oil Pipeline speaks volumes. That contrast encapsulates the centuries-long conflict between the mindset of the Seven Laws of the Oceti Sakowin (and the spiritual laws of other Original Nations), and the Seven Laws of Domination found in the meaning of Christendom's Latin term "domo": "to subjugate," "to subdue," "to force into subservience," "to tame," "to domesticate," "to cultivate," and "to till."
The Dakota Access Pipeline project aptly symbolizes the toxic path of the American Empire being "increased and spread" across the territories of our nations, leaving behind a wake of destruction and poison: Think of the lead in the bloodstreams and brains of children in Detroit, of the mercury in the fish all over the continent, of the lead in the waters of Indiana poisoning people there, of the radiation in the groundwater at Hanford Nuclear facility, the 287 chemicals detected in the umbilical cord blood samples that the Red Cross gathered from pregnant women. 180 of the chemicals are known to cause cancer in humans or animals, 217 are toxic to the brain and nervous system, and 208 cause birth defects or abnormal development in animal tests. These and countless other kinds of examples are powerful indicators that the imperial trajectory of the almighty dollar does not revere and protect the beauty of the Fabric of Life.
All of this and more has been done to our nations, our ecosystems, and to everyone, in the name of "human" "civilization," mind you. Yet as Stanley Diamond accurately noted in his book In Search of the Primitive, "Civilization begins with conquest abroad and repression at home." The words conquest and repression are, of course, but two synonyms for domination.
The American empire's capitol was built with slave labor in Washington, D.C., and a property tax was levied on the slave owners for their slaves. The American empire along with its corporate interests has steadfastly claimed the right to coerce original free Native nations into obedience to a traumatizing system traced back to the empire of Christendom and the so-called Age of Discovery (Invasion).
Dogs of Christendom unleashed on defenseless Native people by Spanish conquistadors were used in keeping with two key phrases found in the papal decree unleashed by the Holy See on May 4, 1493. That document, and three others issued that year, exhorted the Spanish monarchs to "prosecute the propagation of the Christian empire," ("imperii Christiani propagationem prosequi"), and "subjugate the barbarous nations" ("barbarae nationes deprimantur").
Through their actions, the Americans have transformed those phrases into "prosecute the propagation of the American Empire" and "dominate the Native nations." Take, for example, the use of dogs and pepper spray to dehumanize and terrorize our Native people and their non-Native supporters who were angered by Energy Access Transfers personnel intentionally bulldozing a destructive 150 foot swath for a mile and a half, directly through sacred and culturally significant locations. The dogs and pepper spray illustrate the behavior of a pitiless imperial system that could care less about "heathen-infidel" sacred places and burial sites.
The Dakota Access Pipeline is a major project of engineering. In their book Bridges, Canals & Tunnels: The Engineering Conquest of America (1968, American Heritage Publishing in Association with the Smithsonian Institution), David Jacobs and Anthony E. Neville introduce their subject matter by acknowledging the religious motivations behind the so-called "expansion" of the United States by colonizing the territories of our Native nations. "Like medieval crusaders, they [the American people] believed their mission to be divinely inspired, their victories inevitable" (p. 6).

Jacobs and Neville quote the poet Walt Whitman as stating: "It is for the benefit of mankind" that the United States' "power and territory should be extended-the farther the better" (Ibid.). This frames our nations and peoples as being outside the scope of "mankind." Jacobs and Neville say that "America's claims to the land were justified" by John L. O'Sullivan, when he was a thirty-two year old New York newspaper editor. It was O'Sullivan who said at that time (1845), "our manifest destiny is to overspread and possess the whole of the continent which Providence [God] has given us."
Chief Justice William Drayton of the state of South Carolina expressed this same sentiment seventy years before O'Sullivan in a grand jury address in 1776. Drayton spoke of the "unerring wisdom of Providence," who had chosen the present generation to establish the American empire-the one which promises to be the most glorious in history. The tradition of using vicious dogs and other techniques to coerce Native nations and peoples into obedience to its arbitrary control is also part of that "glorious" history of American empire-building.

Franklin (Indians + Rum = Land), Washington ("Town Destroyer"), Jefferson, Madison, Marshall, and many others all envisioned the American empire overrunning the entirety of the continent and our free nations. This overall tradition is encapsulated in wording from the papal decrees of 1452, 1455, and 1456, "invade, capture, vanquish, and subdue" all non-Christians, "reduce them," and "take away all their possessions and property," wording renewed in 1493 and 1514. This language was issued under "Apostolic authority," and therefore viewed as sanctioned by "God."
"In God We Trust," says the American dollar. The papal bull says of that God: "We trust in Him from whom empires (imperia), and dominations (dominationes), and all good things proceed" (papal bulls of May 3 and 4, 1493). Such is the mindset that the Dakota Hunkpapa Nation and the Oceti Sakowin are having to deal with in this latest saga with the invasive and colonizing Dakota Access Pipeline.
My thanks to William "Pila" Laronal (Kanaka Maoli) for his assistance with this column.
[Steven Newcomb (Shawnee, Lenape) is co-founder and co-director of the Indigenous Law Institute, and author of Pagans in the Promised Land: Decoding the Doctrine of Christian Discovery (Fulcrum, 2008). He is a producer of the documentary movie, The Doctrine of Discovery: Unmasking the Domination Code, directed and produced by Sheldon Wolfchild (Dakota), with narration by Buffy Sainte-Marie (Cree). The movie can be ordered from 38Plus2Productions.com]
#NoDAPL Day of Action - Tuesday Sep. 13 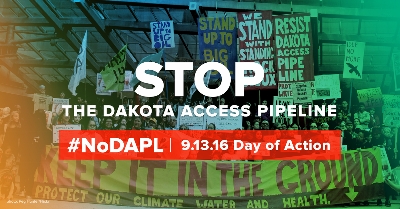 Be part of a national day of action against the Dakota Access Pipeline on Tuesday, September 13! Find an event near you, or sign up to host an action in solidarity with the indigenous communities and local farmers and landowners fighting on the front lines.
New solidarity actions and cities being added daily. Click here.

Right now, we're witnessing one of the most courageous stands against a fossil fuel project this country has ever seen. The movement to stop the Dakota Access Pipeline is growing stronger by the day, and it's time for all of us to rise up and play a role in this fight - no matter where we live.
If built, Dakota Access would carry toxic fracked oil from North Dakota across four states and under the Missouri River, immediately upstream from the Standing Rock Sioux Nation. That makes it a threat to the sacred land and water of Native communities and a disaster for the climate.
Thousands of Indigenous activists have set up prayer camps along the pipeline route in a historic moment of nonviolent resistance. They're fighting with everything they have to protect their water, the land, their history, and the climate -- and we need to fight with them.
To defeat a pipeline, it takes a movement of people from all corners of the nation. That's why on Tuesday, September 13, people around the country are taking part in a day of action in solidarity with Standing Rock calling on President Obama to instruct the Army Corps of Engineers to revoke the permits for this dirty oil pipeline.
Here are more ways to support activists on the front lines:
Spread the word on social media using #NoDAPL
Supporting Organizations:
Honor the Earth
Indigenous Environmental Network
350.org
CREDO Action
Sierra Club
Bold Alliance
Greenpeace
U.S. Climate Plan
Environmental Action
Just Foreign Policy
Climate Hawks Vote
Stand.Earth
WildEarth Guardians
350 Louisiana
Women's Earth and Climate Action Network (WECAN)
Earth Action, Inc.