I don’t like Hillary Clinton or the Democratic Party. I’m voting for them anyway.

I organized and rallied for Bernie, but I can't let Trump win. 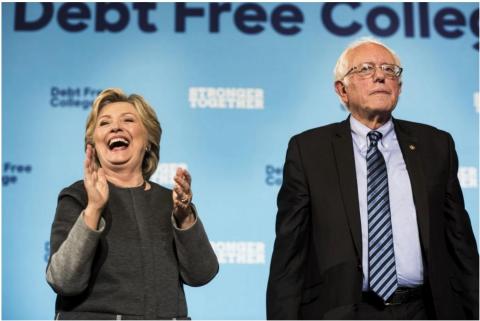 Imagine: You spend weeks wondering if your spouse is cheating on you. You ask him about it, and he denies it. Then one day, you find his emails clearly showing that he has been cheating. You confront him about it, and he shrugs it off. You see no remorse in him. If anything, you see contempt. You start entertaining dark thoughts in your suffering. One night while you’re fighting, an intruder breaks into your house. The intruder points a gun at both of you and threatens to hurt you and your children. Do you keep fighting your spouse, or do you try to figure out how both of you and the children can make it out alive?

For weeks approaching the Democratic National Convention and for days after, I was angry at Hillary Clinton’s campaign and the Democratic Party. I felt betrayed, and I was suffering partly because I saw no sign of remorse after email leaks showed that party officials had conspired to work against Bernie Sanders’s campaign. If anything, I saw contempt for Sanders himself and Bernie supporters like me. The memory of Sarah Silverman on the DNC stage sneering, “You’re being ridiculous” at heartbroken Sanders voters left a terrible wound, partly because there was no one invited on stage to offer anything like a rebuttal. I entertained dark thoughts after Philadelphia, such as joining the anti-Democratic party movement #DEMEXIT and leaping into the eager arms of the Green Party, or leaving America altogether.

But I’m not doing any of those things. I can’t. Even though I devoted huge amounts of time and energy to Sanders’s campaign, and despite the DNC’s unfair treatment of my preferred candidate, I refuse to let Donald Trump rise to power. For me, voting Clinton is about protecting America’s most vulnerable from the right-wing extremism Trump represents, even if it means throwing my support behind a candidate I’m not especially fond of.

I volunteered countless hours to support Sanders’s campaign during the Democratic primaries. With a few friends, I organized what must be one of the first grass-roots Sanders events, in April 2015 in New York City. I was there in Burlington, Vt., on May 26, 2015, when he announced his candidacy. I was elated to see so many people with the same dreams for changing America by aggressively confronting income inequality, climate change, war and money in politics. During the primary, I traveled to Iowa, New Hampshire and Washington state, and maintained the third-largest grass-roots page for Sanders on Facebook, We Want Bernie Sanders (now called Save Main St). Like thousands of others in Bernie’s movement, I did all that because I love my country and wanted a better future for us all.

On Aug. 2, a few days after the Democratic convention, I went to a Trump rally in Ashburn, Va. I was there interviewing protesters and Trump supporters who gathered outside the venue because the event had sold out, and they couldn’t get in. The protesters were mostly high school students — Muslim, Latino, black, Asian, white — and the Trump supporters were mostly white and older. Their exchanges were surprisingly respectful.

When the rally ended and Trump supporters who made it into the venue walked by, the mood shifted. The ones who had attended the rally were ready for a fight. One woman started yelling and cursing at the protesters. When I lifted my camera to film her, she grabbed the camera and tried to throw it down, screaming, “Put the f—ing camera down!” When my grip on the camera outmatched hers, she looked at me as if I were a piece of trash. While we stood and looked at each other, it finally hit me: We really are in danger. Although I was still disgruntled with the DNC and not enthusiastic about Clinton, I began to realize I couldn’t let Trump get near the White House.

After that, I started talking to friends of mine who, like me, had poured so much into supporting Bernie, and found the idea of voting for Clinton after the intense, bitter primary hard to stomach. Many of the Bernie supporters I spoke to think the United States can’t get much worse, but I know firsthand that it can. Until I was 10 years old, I lived in South Korea while it was ruled by dictator Park Chung-hee, who came into power through a military coup d’état. I remember the curfews, the constant fear of authority figures, the pressure to conform and the fear of speaking up. I have seen how quickly citizens can lose civil liberties and rights, how quickly we can get to the point we’re afraid to meet in public places to protest.

Like dictators and authoritarians of the past, Trump has a playbook for power that includes targeting journalists and activists, branding dissidents as enemies to foster a culture of conformity, fostering a culture of violence and bullying against minorities, controlling women through sexual humiliation and by taking away reproductive rights, and blocking a democratic path to regime change by undermining our voting rights.

These tactics have clearly made a cultural impact in America even though Trump the candidate has yet to gain institutional power. Violent hate crimes against Muslim Americans are escalating, and teachers are reporting that there’s more bullying in schools. If Trump comes to power and has even more authority and legitimacy, circumstances could feasibly worsen. People’s willingness to gamble the outcome of this election puts the most vulnerable members of our society in harm’s way.

As president, Trump and his brand of extremism would have more than a cultural outlet. Through their appointees, presidents have power in our everyday lives. Cabinet appointments and department hires run powerful federal agencies including the Department of Justice, Homeland Security, Department of Defense, State Department, Department of Interior and more. Trump and his campaign have mentioned these right-wing extremists as potential appointees: Rudy Giuliani, Joe Arpaio, Sarah Palin, Ben Carson, Chris Christie and Forrest Lucas, oil executive and animal rights opponent for Department of Interior. Perhaps scariest of all, Myron Ebell, a leading climate-change denier, is expected to head Trump’s EPA. Trump’s running mate, Indiana Gov. Mike Pence, is a fundamentalist Christian who pushed extreme anti-LGBT and anti-reproductive rights legislation as governor. With an administration like this, dissidents like Sanders supporters would have little hope of exerting any kind of influence.

Let me be clear: I am still angry at the DNC, and I have fears about Clinton being our next president. She is a war hawk. She sold fracking to the world. She sees no path for single-payer health care. She will probably try to pass the Trans-Pacific Partnership trade agreement, though she’s promised not to. However, there’s one thing that compels me to vote for her that is not related to my fear about Trump. Clinton is an ally of two people in Washington I do trust: Sanders and Elizabeth Warren, neither of whom would be likely to have any sway with Trump’s administration. I intend to work my heart out to elect Clinton and give Sanders and Warren the best chance at success in bringing about needed change in Washington.

Noam Chomsky called Trump “almost a death knell for the human species” in May, but it didn’t sink in then. Now, though, I do see Trump as the dangerous intruder with a gun threatening America, and it’s difficult to think about anything else with less than five weeks left to stop him. I do hope fellow Bernie supporters will join me in fighting off the intruder.

Annabel Park is a documentary filmmaker and activist who manages the Facebook page Save Main St.  Follow @annabelpark