DNA from old skeletons suggests a complex history of new DNA being introduced. 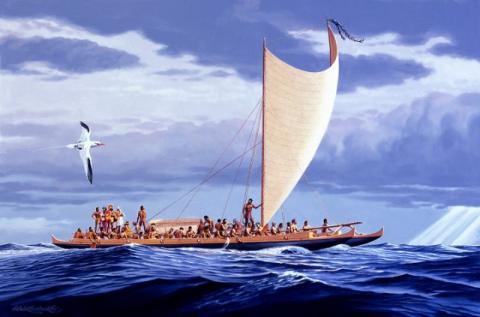 An artist's depiction of the canoes used by the Polynesians of the Hawaiian Islands., Herb Kawainui Kane | University of Hawaii

The Polynesian exploration of sparse islands of the Pacific will remain humanity's greatest migration until we head for other planets. And it clearly wasn't just a one-way trip; evidence indicates that trade networks covering thousands of kilometers were maintained for centuries. Now, a new study of ancient Polynesian DNA has indicated that it wasn't just trade goods that were exchanged. DNA from at least two different sources ended up spreading through the population of Polynesia before European contact.

The study also suggests that our understanding of how history produced the genetics of modern Polynesians was completely off-base.

That understanding was built by looking at the DNA of modern Polynesians and comparing it with the genetics of other peoples around the Pacific. The data indicated that modern Polynesians have a mixed ancestry, with the majority of their genomes coming from an East Asian population. An additional contribution, however, came from the Papuans that inhabit the islands north of Australia.

This contribution is consistent with the route the Polynesians appear to have taken into the Pacific, which started in Taiwan. New Guinea would have been roughly on the route between Taiwan and islands like the Bismarks and Vanuatu, where the Lapita culture developed over 3,000 years ago. The Lapitans' descendants then spread from this core area throughout the Pacific. So if they had extensive contact with the Papuans before getting to the Polynesian core islands, they would have set out on their voyages already carrying the results of that contact in their genomes.

It was a logical conclusion and consistent with the available evidence. Unfortunately, it also appears to be wrong.

That's the conclusion of a new study based on ancient DNA. A large team of researchers obtained samples from four skeletons that date to the Lapita culture: three skeletons from Vanuatu that, based on carbon dating, are over 2,700 years old and another from Tonga that's over 2,300 years old. DNA was obtained from these bones—not easy, given the warm climate of their location—and specific sequences in the mitochondrial DNA were used to confirm that they shared ancestry with modern Polynesians.

The authors of the study then obtained data from key sites in the genome where humans tend to carry individual base differences. These differences were then compared to the pattern of differences seen in the relevant modern populations.

The big surprise was that there was almost no hint of Papuan ancestors. Instead, all the DNA was most closely related to populations in East Asia—as you'd expect for a population that originated in Taiwan. The immediate ancestral population, however, seems to have intermixed with a variety of other groups in East Asia since, so there's no clear source of the Polynesians left in Asia.

If the Lapitan people didn't have any Papuan DNA, how did it end up in modern Polynesians? The authors looked for hints by examining how long the stretches of Papuan DNA are in the modern populations. While the stretches would originally have consisted of entire chromosomes, exchanges of DNA between pairs of chromosomes would gradually break those stretches up into smaller pieces. By examining their current length, the authors conclude that the Papuan DNA was introduced into the ancestors of modern Polynesians between 50 and 80 generations ago.

That works out to be 1,500 to 2,300 years in the past, which also happens to be part of the period when the Polynesian trade networks were likely to be flourishing. And as the authors point out, this was a period when inter-island warfare was a regular event, which could have led to population displacement.

The authors also found indications that there was additional DNA introduced during this time. It appears to have come from a different branch of the original population that migrated out of Taiwan at the same time but was isolated from the Lapitan skeletons at some point after that.

So the basic idea that modern Polynesians carry DNA from a mixture of peoples remains correct. But the new data makes a forceful case that this isn't how they started. Rather than picking it up en route, new DNA appears to have been introduced after the Polynesian core islands were settled and a distinct ancestral culture had developed.