Divided But Fighting Back: An Interview With Inequality Documentary Filmmakers

Everywhere in the country where there are problems, there are people working to find solutions. 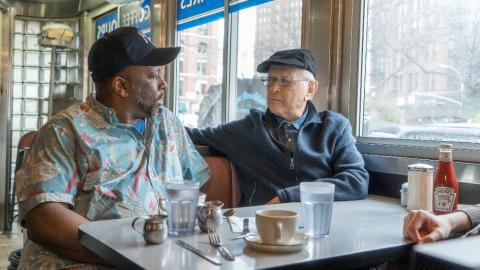 Norman Lear and Rob Robinson of Take Back the Land., EPIX

Depending on whom you ask, Solly Granatstein and Rick Rowley have spent their careers either causing trouble or exposing truths. As investigative journalist-filmmakers they have been on the front lines of digging up facts and battling the status quo, all to expose injustice. They’ve been pretty damn good at it too. Granatstein worked for 60 Minutes for 12 years and has won seven Emmys, a Peabody and a host of other awards. Rowley’s Dirty Wars, a film that earned him a 2014 Oscar nomination for Best Documentary Feature, shed light on U.S. covert ops all over the world. Now teamed with Lucien Read, this trio of “cineactivists” has delivered America Divided, a new documentary series airing on EPIX. And they’ve enlisted a few famous friends.

Executive-produced by Shonda Rhimes, Common and Norman Lear (the latter two appear on camera), America Divided chronicles seven diverse celebrity correspondents (Lear, Common, Amy Poehler, America Ferrera, Jesse Williams, Zach Galifianakis and Peter Sarsgaard) as they dig deep into an array of issues plaguing our nation. At the core of the series is the contention that housing, education, the criminal justice system, undocumented and domestic workers, voting rights and the heroin epidemic are all riddled by systemic inequality. Over its five episodes, the series demonstrates that class and race collide across this country, sparking a raging conflagration of disparity that burns largely unchecked. Granatstein and Rowley spoke to Capital & Main about their ambitious project, which premiered September 30.

Capital & Main: Why this topic? Why this project? Why now?

Solly Granatstein: The three of us were working on a very similar show, a celebrity driven docuseries called Years of Living Dangerously about climate change. And we thought, What is the other existential threat facing our society apart from climate change? Inequality just stuck out as this huge challenge that needs to be confronted. And even in reporting on climate change stories and even in all of the filmmaking and journalism we have done over the years, social class and inequality always stuck out as the factor that would make some people way more vulnerable than other people, sort of the operating principle for the planet.

Why did you use celebrities as correspondents? And why interweave multiple stories in each episode and not do separate docs? Was it simply to expand the audience for the series?

Rick Rowley: That was part of it. Here is a relatable recognizable face that is charismatic and works well on camera and that invites the audience into the homes of families in South Chicago, into a jail in Dayton, Ohio with heroin addicts, and allows you to feel a human connection with people you’ve never been allowed to feel a connection to. One of the premises of the series is that it’s impossible to understand any of these sub-issues around inequality by themselves. It’s our hope that weaving these stories of people who are struggling around these issues all around the country will allow them to feel the resonances and the connections between their stories.

How much did the participation of the stars both get you access and effect change?

Rowley: We get access to people whether or not we have a celebrity correspondent attached to the project. What they bring to the table that is special is [that] too often you have correspondents who come in and assume the posture of an objective sort of news personality, which is about keeping your distance, trying to strike a balance and eschewing an actual deep human personal emotional engagement with the person that you are talking to. And the thing that all of these correspondents were great at was immediately engaging on a human level with people. They were all in their own unique way personally engaged and moved by the story they were working on. And our presence did transform the stories we were working on and potentially helped to change things.

As in the case of the school board assembly where they actually decided to agree to reforms? I imagine that might not have happened had Jesse Williams and the cameras not been there.

Granatstein: A couple of things were going on. For years there was a grassroots movement growing to pressure the school board and they were able to ignore it for a long time. Until they punched through and started to draw national attention. And we were a big part of that national attention. So our presence was certainly part of the force that pushed the school board to make a whole series of concessions to the parents and families there. And in our research, we uncovered some documents and facts that became the basis for a Southern Poverty Law Center civil rights lawsuit against the county, so our reporting is part of the movement.

So the format really allows you to underscore the systemic nature of inequality in this country by seeing the commonalities in the problems?

Rowley: It evades simple policy solutions, right? This unbreakable Gordian knot of race, class and gender at the center of the American Experience for 300 years. You can’t separate them out and deal with them one at a time. Look at our housing story, our education story and our criminal justice story. At the center of our series is that you have to deal with these things together and that also the people who are struggling around these issues — who might seem very different — share a deep commonality in their struggle. There is a huge basis for common struggle and common experience, [whether] you are a deindustrialized white worker in Dayton, Ohio, or you’re someone in Flint, who has just been poisoned by their city.

But we are a country in which 30 percent of the people think our president is Muslim and only 40 percent can name the three branches of government. So how do you evade just preaching to the converted?

Granatstein: Hiring the celebrity correspondents was an effort to do that. Having somebody like Zach Galifianakis, who is just known for these Hangover movies, or Amy Poehler, who is known for Saturday Night Live and Parks and Recreation, or Common, who is a hip hop artist. We really tried to make the cast reflect America and, as Rick said, be relatable and charismatic in a way that will just draw people. And I think that the way we are telling the stories, you know it’s a docuseries, but not these dry documentaries somebody would be tuning in to PBS to see. They are really stories and they are told really cinematically to draw people in who wouldn’t otherwise be there. And one more thing about the celebrities. I think we want to say that inequality is corrosive to the entire society. So even if someone is an entertainer who has had a lot of success in their life and they are on the other side of the divide, for us to put them as first-person, subjective, talking about their own experience with inequality and reflecting the things that they come across, we felt was a really powerful way to relay the message that “I’m concerned about this. It doesn’t matter where I fall in society at the moment. This is all of our problem.”

One of the most poignant moments in the series was when the 94-year-old Norman Lear went undercover to expose racial discrimination in New York City housing. He seems to have an epiphany that perhaps not much has changed since his issues-based shows like All in the Family aired 45 years ago. What was it like to witness that?

Granatstein: Well you know, it was incredibly sad on the one hand, and Norman talks about how sad that experience made him, and I think he really was surprised when he took part in that housing test. I mean those housing tests are really a throwback to the ‘50s and ‘60s and ‘70s — you really don’t hear about them too much anymore or think that they are necessary. His shows back in the ‘70s were all about racial understanding, and all of the older African Americans we came across knew who he was, they knew all his shows. The way they reacted to him really was just amazing. Just love. His shows were so meaningful to them, and they just love the guy.

So this systemic inequality has been so insidious and solidified over generations, and now seems so interwoven into the fabric of this nation’s everyday existence. How can you be hopeful in light of such a daunting task?

Rowley: For every single one of the stories, we picked not just places where there were the most obscene examples of a problem. We chose points of conflict, where there were movements organized that were actually struggling and fighting for solutions. So it’s hard not to be actually hopeful. Like Reverend Barber’s Moral Mondays organizing all across North Carolina, where he has stitched together not just urban and black, but included all-white NAACP chapters up in the mountains — who are joining for the first time because they see a commonality in their struggle for democracy in their state. To Pinellas County, where residents are organizing to effectively make change in their education system. Flint, Michigan where we still wouldn’t know that people were being poisoned and the lead would still be in the water if it weren’t for a self-organized citizens’ campaign who did their own scientific research and then pressured the state and brought national attention to it. So everywhere in the country where there are problems like these, there are people working to find solutions.

So it feels like a once in a generation window, where it’s possible to have a conversation about these issues that are central to the American Experience. It’s the moment for a series like this.