labor Two Federal Unions Cling to Trump, Despite Everything

If his racist, misogynistic, narcissistic campaign does win, two unions representing thousands of federal law enforcement officers will have been accomplices. Even as dozens of Republican stalwarts flee Trump, no longer able to stomach the latest vulgar demonstration of his character, the National Border Patrol Council and the National ICE Council remain in his throng. 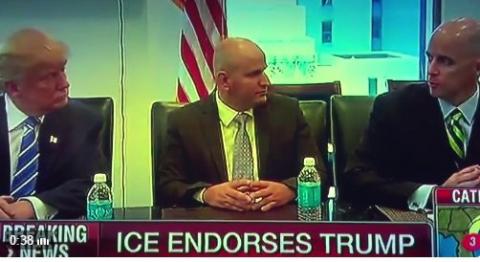 Donald Trump meets with ICE officials in August.The union, which represents 5,000 federal immigration officers, endorsed Trump in September.,
Donald Trump, having disgraced the Republican Party, polluted the presidential campaign and shamed and embarrassed the nation, now wants to bring those talents to the federal government.
If his racist, misogynistic, narcissistic campaign does win, two unions representing thousands of federal law enforcement officers will have been accomplices. Even as dozens of Republican stalwarts flee Trump, no longer able to stomach the latest vulgar demonstration of his character, the National Border Patrol Council and the National ICE Council remain in his throng.
That puts them at odds with their parent organization, the American Federation of Government Employees (AFGE), and its parent, the AFL-CIO, which strongly support Democrat Hillary Clinton.
It’s ironic, make that disturbing, that organizations representing law enforcement officers would cling to a man who bragged about sexual assault and mused about jailing his political opponent if he wins.
Interviews with leaders of both organizations revealed no plans to dump Trump. Their one-issue tunnel vision allows them to ignore indications that a Trump administration, with Mike Pence as vice president, would push proposals that are anathema to unions, including those representing cops. Two prominent Trump advisers have urged him to push for civil-service law changes that would allow a Trump administration to fire feds faster.
The two unions are dissatisfied with the Obama administration’s policy on border security, their sole focus. Yet their endorsement of Trump means they support a man whose immigration platform is best known for banning Muslims — or the current euphemism “extreme vetting” — and getting Mexico to pay for a wall along the border. Do the police unions consider this good immigration policy? Do they care that a Muslim ban is illegal?
The National Border Patrol Council endorsement “came down to one issue, and that was border security,” said spokesman Shawn Moran.
As the endorsement statement explains, “We don’t need a person who has the perfect Washington-approved tone.”
Their single-subject approach to candidate appraisal allows them to miss a number of other issues that would directly and negatively affect their members’ interests. If Trump wins, he presumably will be guided by the Republican platform. And Pence has said and done a number of things as a member of Congress and governor of Indiana that are abhorrent to labor organizations and public employees.
Among other things, the platform calls for a 10 percent reduction in the federal workforce and a compensation system where pay and benefits “reflect those of the private sector,” often code in conservative circles for compensation cuts.
The platform targets federal workers who are behind in their taxes, when the delinquency rate is twice as high for the general population, and calls for increased privatization of federal jobs. Regarding labor generally, the AFL-CIO called the platform “union-busting.”
AFGE President J. David Cox Sr. noted the campaign walks, mailings and phone calls his labor organization is doing for Clinton but added that AFGE is a democracy and its members can support whomever they want. He said about 70 percent choose Clinton.
In addition to the platform, Trump is getting counsel from high-profile advisers that can’t please the two police unions.
Former House speaker Newt Gingrich (R-Ga.) urged Trump to do battle with federal labor organizations. According to a September New Yorker article, Gingrich recommended “getting permission to fire corrupt, incompetent and dishonest workers — that’s the absolute showdown.”
Gingrich predicted a fight with unions would lead to an “ongoing war” similar to the 2011 labor standoff with Wisconsin Gov. Scott Walker (R) when he pushed restrictions on public employees’ collective-bargaining rights. “You have to end the civil-service permanent employment,” Gingrich told the magazine. “You start changing that and the public-employee unions will just come unglued.”
In an email exchange about the federal workforce with The Washington Post, Gingrich said that “the absence of accountability is breathtaking.”
Another top Trump adviser, New Jersey Gov. Chris Christie (R), also urged the candidate to propose changing federal civil-service procedures, which can be lengthy and cumbersome, to make it “a lot easier to fire those people.”
The Trump-Pence campaign did not reply to a request for comment on the recommendations.
Speaking of Pence, his AFGE rating for his last term in Congress was zero. He did not support the union’s position on any of 19 selected measures, covering issues that apparently are important to the Border Patrol and ICE rank and file. Beyond the federal workplace, the AFL-CIO complains, Pence supports “right to work” laws and opposes increasing the minimum wage and expanding workers’ rights.
Pence has “a very strong record of being against any type of government employee,” Cox said.
What the platform and Pence’s record portend for federal employees apparently means little to the two police unions.
“We’re law enforcement officers, so we put public safety first before anything and everything,” said Chris Crane, president of the National ICE Council.
Despite organized labor’s overwhelming support for Clinton, Crane said the Democrats “don’t help unions.” Morale at Immigration and Customs Enforcement is bad, according to Crane, who said that “the Obama administration has been horrible to our employees.”
Views such as that make the two federal law enforcement unions oddities among the labor movement.
“Clearly,” Cox said, “we believe that Hillary Clinton is the best choice for federal employees, with a demonstrated record of support for federal employees.”