While many people only recently may have learned of the fight against the Dakota Access pipeline (DAPL), Standing Rock Sioux tribe Chairman David Archambault II has worked for two years to prevent its construction. 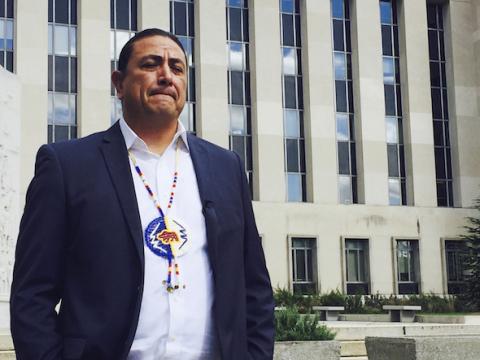 Demonstrations against the construction of a $3.8 billion oil pipeline in North Dakota began to receive much-needed mainstream media coverage this week when law enforcement and protesters faced off in a tense confrontation that ended in at least 140 arrests. While many people only recently may have learned of the fight against the Dakota Access pipeline (DAPL), Standing Rock Sioux tribe Chairman David Archambault II has worked for two years to prevent its construction.

Some background: The proposed pipeline would cut across the Missouri River just upstream of land belonging to the Standing Rock Sioux. It could threaten the tribe’s only water source if a leak were to occur (and as many environmental activists note, leaks always occur.) Over the past several months, the tribe has begun to receive support from other “water protectors,” and peaceful demonstrations—such as prayer circles—have become a regular aspect of life on the Standing Rock reservation.

Archambault attended Standing Rock High School and earned a bachelor’s degree in business administration from North Dakota State University and a master’s in management from the University of Mary in Bismarck, N.D. As chairman of the tribe, he has been at the forefront of opposition to the DAPL. In an August op-ed for The New York Times, Archambault wrote:

Our tribe has opposed the Dakota Access pipeline since we first learned about it in 2014. Although federal law requires the Corps of Engineers to consult with the tribe about its sovereign interests, permits for the project were approved and construction began without meaningful consultation. …

The Dakota Access route is only a few miles shorter than what was proposed for the Keystone project, yet the government’s environmental assessment addressed only the portion of the pipeline route that traverses federal land. Domestic projects of this magnitude should clearly be evaluated in their totality—but without closer scrutiny, the proposal breezed through the four state processes.

Archambault represents his community and its fight to protect the water, eloquently expressing the racial, economic and political factors moving the construction of the DAPL forward. “Perhaps only in North Dakota, where oil tycoons wine and dine elected officials, and where the governor, Jack Dalrymple, serves as an adviser to the Trump campaign, would state and county governments act as the armed enforcement for corporate interests,” he writes in his op-ed. “It’s a familiar story in Indian Country. This is the third time that the Sioux Nation’s lands and resources have been taken without regard for tribal interests.”

In recent months, demonstrations against the DAPL have increased in size, and the police response has grown more intense. Law enforcement and DAPL officials have set dogs on protesters, used pepper spray, sound cannons and rubber bullets. As the situation intensifies, Archambault continues to speak powerfully on the injustices.
Earlier in October, for example, he explained the status of the ongoing legal challenges to the pipeline and urged President Obama to get involved.

Other protests against the government have ended in violence—take, for example, the armed standoff between Ammon Bundy and law enforcement in Oregon earlier this year. But the Standing Rock Sioux tribe remains committed to peace, even as police continue to escalate the confrontation. As tribal chairman, Archambault reinforces this commitment to peaceful and spiritual protest.

Earlier this week, dismayed by the lack of action from the Obama administration, the Standing Rock tribe issued a plea for action to the Department of Justice. “I am seeking a Justice Department investigation because I am concerned about the safety of the people,” Archambault said in a letter to U.S. Attorney General Loretta Lynch. “Too often these kinds of investigations take place only after some use of excessive force by the police creates a tragedy. I hope and pray that the Department will see the wisdom of acting now to prevent such an outcome.”

The DOJ had not responded to Archambault’s request by Thursday, when protesters and police clashed and more than 140 people were arrested. Archambault issued a statement after the escalation of tensions:

The Department of Justice must send overseers immediately to ensure the protection of First Amendment rights and the safety of thousands here at Standing Rock. DOJ can no longer ignore our requests. If harm comes to any who come here to stand in solidarity with us, it is on their watch. They must step in and hold the state of North Dakota and Morton County accountable for their acts of violence against innocent, prayerful people.

For many members of the tribe, faith motivates their mission. In fact, despite Thursday’s arrests and aggression, the Standing Rock Sioux received a blessing in the form of a herd of bison:

“Indigenous culture honors American bison (known as Tatanka Oyate, or Buffalo Nation),” U.S. Uncut reports. When the bison appeared at camp, “[a] cry of joy reportedly erupted from the Standing Rock Sioux, as they had been praying for assistance from the Tatanka Oyate during their standoff with riot police and national guardsmen.”
The tribe’s fight for clean water goes beyond environmental concerns—it’s an issue of justice that has long been at the center of the relationship between indigenous people and the U.S. government.

Archambault, in his role as chairman, continues to remind Americans of the often overlooked history of Native American oppression at the hands of the government. “Many of us have been here before, facing the destruction of homelands and waters,” he concludes in his op-ed. “We are also a resilient people who have survived unspeakable hardships in the past, so we know what is at stake now. As our songs and prayers echo across the prairie, we need the public to see that in standing up for our rights, we do so on behalf of the millions of Americans who will be affected by this pipeline.”

For his stirring articulation of centuries of mistreatment and his unwavering commitment to peace in the face of an unjust, militarized state, we name David Archambault II our Truthdigger of the Week.

Here's a link to Six ways to Support NoDAPL from Papermag.com