Sanders believes that neoliberalism is the heart of our problem ― that it leads to runaway inequality, a rigged political system, an exploitative Wall Street, and the full-scale assault on the living and working conditions of working people ― black, brown, white, gay, trans and straight. That system, he believes, also leads to the dramatic rise of incarceration, urban and rural poverty, and the stalling of real wages for the vast majority of the population. 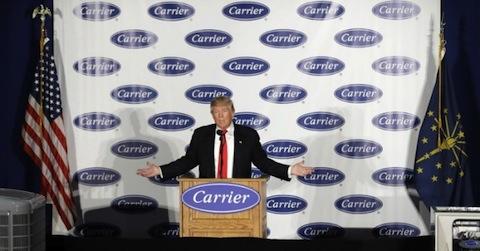 President-elect Trump scored a remarkable PR victory by saving 1,000 of the 2,100 jobs that Carrier and it’s parent company, United Technologies, were outsourcing to Mexico from Indianapolis. During the campaign, Trump pledged to stop those jobs from leaving the country and he has come through. (Much credit should go to the United Steelworkers for keeping this issue alive.)

Trump used the plight of those workers as a battering ram to pummel Hillary Clinton on trade and the loss of decent paying U.S. manufacturing jobs. Now, his success (which, of course, is based on lavishing corporate welfare on Carrier/United Technologies) could lead to a mass exodus of working people from the Democratic party.

The Myth of the White Working Class

Post-election pundits are propagating the false equation that “industrial workers” equals “white working class,” and that Clinton’s crushing defeat in the Rust Belt was the result of a white worker revolt against political correctness ― i.e., they’re racists!

But America’s industrial workforce reflects the future, not the past. The 1,400 person Carrier workforce in Indianapolis, for example, is fifty percent African-American. Women make up half of the workers on its assembly lines, and ten percent of the employees are Burmese immigrants.

Benign Neglect in the Democratic Party

Trump’s effort to save these jobs contrasts starkly with the failure of the established Democratic Party to do anything at all about such devastating plant closures. President Obama has never used his bully pulpit to mention even one of the thousands of facilities that shifted abroad under his watch. Similarly, Hillary Clinton remained silent about Carrier during her entire campaign, thereby allowing Trump to morph into the champion of the working class.

But none of that is particularly surprising given how deeply Wall Street/corporate elites are embedded within the Democratic Party. More troubling still is that party elites believe these relocations are economically justifiable.

Neoliberal ideology (the holiness of tax cuts, privatization, deregulation, and the free movement of capital) has become the conventional wisdom of the entire political establishment of both parties. The media in particular echoes the inaccurate notion that these facilities must move so that the parent company can keep up with competition. (Carrier, in fact, is leaving in order to secure more funds for stock-buybacks to enrich hedge funds and top corporate officers. See here. ) All of this capital mobility is pictured as the result of globalization ― a force akin to an act of God.

Virtually every article on Carrier opines that Trump’s quick fix cannot alter the technological march that surely will displace these blue collar workers. What they are really saying is that corporations have the right and obligation to move wherever and whenever they wish in order to boost profits and “shareholder value.” Mainstream economists then assure us that, overall, society is better off due to lower-cost imported goods and higher value-added domestic jobs, even if a few workers are sacrificed along the way.

But a “few workers” have turned into millions of family members and members of devastated communities who have seen their lives deteriorate. They are heading Trump’s way.

Sanders to the Rescue?

Bernie Sanders saw all this coming. That’s why he challenged Clinton in the first place, and that’s why he’s now trying to capture the Democratic Party and turn it into the champion of working people against Wall Street and “the billionaire class.”

In the case of Carrier, Sanders is calling on Trump not to accept a compromise that will still allow hundreds of the jobs to be moved to Mexico. Staying true to his radical politics, Sanders also is calling for a new “Outsourcing Prevention Act” that would:

1) Bar companies from receiving future contracts, tax breaks, grants or loans from the federal government if they have announced plans to outsource more than 50 jobs to other countries;

2) Require all companies to pay back all federal tax breaks, grants and loans they have received from the federal government over the last decade if they ; outsource more than 50 jobs in a given year;

3) Impose a tax on all companies that outsource jobs. The tax would be equal to the amount of savings achieved by outsourcing jobs or 35 percent of its profits, whichever is higher.

4) Prohibit companies that offshore jobs from enriching executives through golden parachutes, stock options, bonuses, or other forms of compensation by imposing stiff tax penalties on this compensation.

The stage is set for an epic struggle between Trump’s right wing populism and Sanders-style social democracy. The corporate-driven Democrats may soon be irrelevant. Either they go along with Sanders and compete for the allegiance with working people, or they get pummeled by more working class defections to Trump’s brand of populism.

Sanders believes that neoliberalism is the heart of our problem ― that it leads to runaway inequality, a rigged political system, an exploitative Wall Street, and the full-scale assault on the living and working conditions of working people ― black, brown, white, gay, trans and straight. That system, he believes, also leads to the dramatic rise of incarceration, urban and rural poverty, and the stalling of real wages for the vast majority of the population.

Sanders understands we only can win significant social democratic reforms by linking together the full set of victims (most of the 99%). He’s talking about the kind of programs that will appreciably improve our lives ― free higher education, single-payer health care, a major attack on climate change, massive public job creation, real criminal justice and immigration reform, a Wall Street speculation tax and now the Outsourcing Prevention Act.

It’s too late to take the Carrier victory away from Trump. It won’t work to belittle Trump by claiming it only covers a thousand jobs, or that too many public tax breaks were tossed to the corporation, or that globalization will eventually make those jobs go away. One thousand jobs means one thousand families who will not see their incomes slashed in half, or worse. More importantly it means hope ― that maybe outsourcing to low-wage countries can be ameliorated.

To get there, Sanders is joining a contentious debate: He argues that the current practice of identity politics is not a complete political program. As he bluntly stated,

So what does this mean for the efforts of tens of thousands of progressive activists who are deeply engaged in halting climate change, preventing police violence, securing equal rights the LGBTQ community, protecting immigrants, and working on a myriad of other significant causes?

Sanders implies that for any of us to succeed, we all must join the fight to enhance the lives of working people. No matter what our priority issue, we will need to devote time and resources to fight for universal programs that lift us all up. In short, we have to expand our issue silos so that fighting Wall Street and the billionaire class can link us together.

Sanders could not be clearer: Either we become a broad-based class movement or we lose. The choice is ours, not Trump’s.

(This piece originally appeared on Alternet.org)