Dispatch From Little Rock: A Local Win in the Ongoing Fight Against Police Violence

On the eve of the election, in a deeply red state, the city of Little Rock, Arkansas, took a small but significant step in furtherance of this goal by dedicating a memorial bench to a victim of police violence named Eugene Ellison. 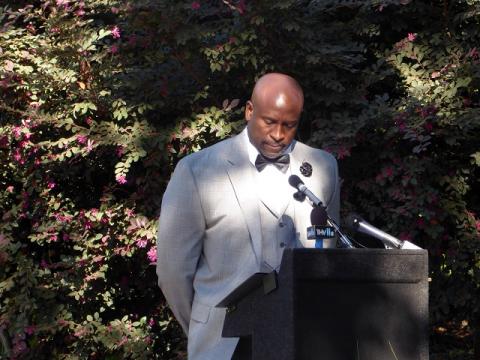 Spencer Ellison, whose unarmed father was shot to death by police officers in his own home, addresses attendees at the City of Little Rock's dedication of a public bench in memory of his father on November 4, 2016. , Flint Taylor

It's time to map out strategies to combat Donald Trump's support for police violence. The president-elect has promised to redouble racist stop-and-frisk, to support reactionary police unions, to further militarize police departments, to attack Black Lives Matter activists, to round up undocumented workers and to support the oil and gas companies that are attacking Indigenous Water Protectors on the front lines in Standing Rock. Meanwhile, Sen. Jeff Sessions -- Trump's pick for attorney general -- will no doubt seek to dismantle the Civil Rights Division of the Department of Justice and make the aggressive investigation of police departments for patterns of racially motivated violence a thing of the past.

Amid all this, much of the battle must be fought locally, in cities and towns across the country. Even as we back those who are on the front lines of acute, present-day struggles, we must also pursue ongoing struggles for reparations in the wake of injustice.

On the eve of the election, in a deeply red state, the city of Little Rock, Arkansas, took a small but significant step in furtherance of this goal by dedicating a memorial bench to a victim of police violence named Eugene Ellison.

Ellison was a 67-year-old African American man who resided in the Big Country Chateau Apartments on the west side of Little Rock. He lived alone and walked with a cane. He had his door open on a cool December evening in 2010, minding his own business, when two white Little Rock police officers working security at Big Country decided to enter his apartment, despite his protests that he did not need help and wanted to be left alone. When he verbally resisted their entry, a scuffle ensued, he was maced, and when he refused to submit, one of the officers fatally shot him from the apartment doorway. The officers claimed that he had raised his cane and started to swing it toward them, but the physical evidence, the paths of the fatal bullets, and another officer on the scene completely discredited that story. 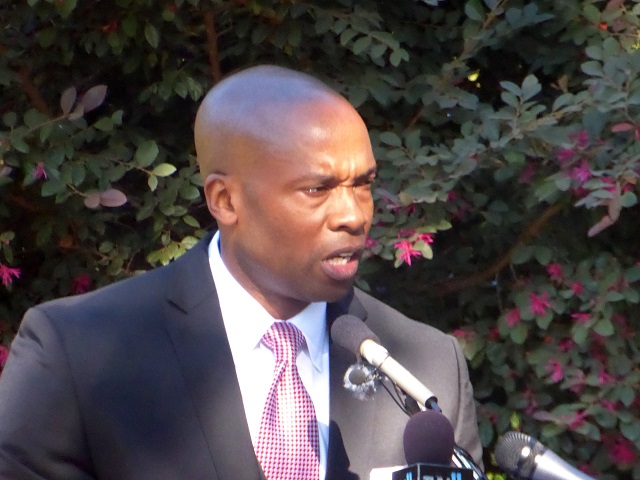 Troy Ellison, son of police shooting victim Eugene Ellison, speaks at the City of Little Rock's dedication of a public bench in memory of his father on November 4, 2016. (Photo: Flint Taylor)

In May of this year, the case was set for trial and the trial team, which was headed up by California attorney Mike Laux, entered into settlement discussions with the city. An attorney named Doris Cheng and I were also on the trial team. Guided by the Chicago reparations for police torture experience, the family and the lawyers sought to combine a monetary settlement with some of the non-monetary elements obtained in Chicago. Only days before the trial was set to begin, a settlement was announced. It was the largest monetary settlement ever reached in a Little Rock police case. It came with an official apology from the City Manager, a memorial bench that would honor Ellison, and a public dedication of the bench. 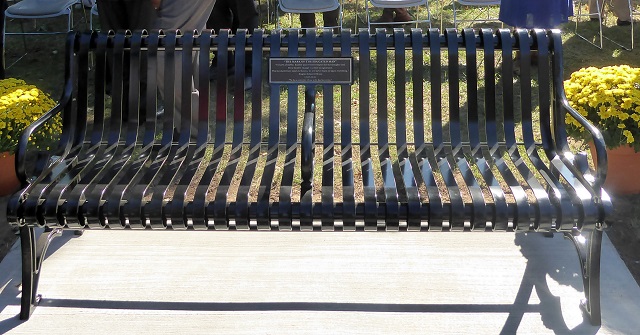 Alongside the large monetary settlement won by the family of police violence victim Eugene Ellison, the City of Little Rock has dedicated this public bench to Ellison. (Photo: Flint Taylor)

In June, Little Rock City Manager Bruce Moore sent the city's written apology to the Ellison family. Citing the often quoted Chapter 3 of the Book of Ecclesiastes, the City Manager wrote that it was time to "build, to mend, and to heal." Quoting Mark 3:25 in saying that "a house divided against itself cannot stand," Moore continued that "a fragmented Police Department and Little Rock citizenry only serves as a detriment to our shared goal of helping Little Rock grow and prosper." While the letter did not admit that the officers, who, unfortunately are still on the force, acted wrongfully, it did offer an apology:

In order to begin the healing process for the family, the Little Rock Police Department and the City of Little Rock, on behalf of the City, I want to extend a sincere apology for the death of your father. While we have all vigorously debated the events that led to his death, the time for healing has begun.

On November 4, a beautiful sunny morning in Little Rock, a group of about 125 family members, ministers and activists from Little Rock's African American community, the Ellison family lawyers, other supporters and the local media gathered in scenic MacArthur Park in downtown Little Rock to dedicate the memorial bench. Moore gave the opening remarks, followed by an opening prayer by the Rev. Dr. C.E. McAdoo of St. Andrew United Methodist Church. After a musical interlude and an inspirational poem, the Ellison brothers spoke.

Spencer spoke first, saying that it was "with immense honor that I stand before you today to memorialize this bench in dedication to my father," who was "a man of faith, integrity and principle." He described his father as a "proud Navy veteran who served his country during the Vietnam Era" and "treated people the way he wanted to be treated." He was "a great artist who drew and painted, expressing his love of life through his artistic abilities." Saying that his father's tragic death still haunts him, he said he found "some peace in knowing that even though this fight isn't over, change will soon come." In a promise to his father, he said "my father's legacy of living a principled, respectful life lives on in his sons." 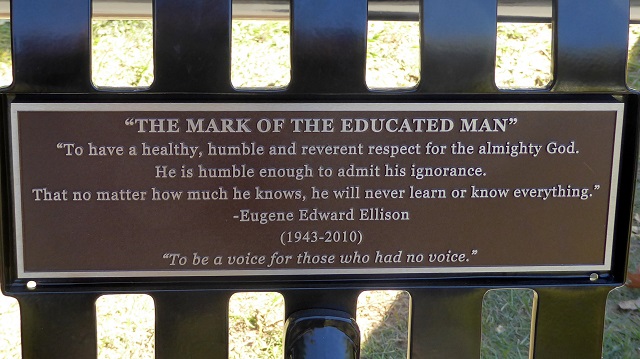 The memorial bench that was dedicated to police violence victim Eugene Ellison on November 4, 2016, bears this inscription in his memory. (Photo: Flint Taylor)

Spencer continued by speaking about how the bench should inspire us all:

Troy Ellison -- who has had to be more circumspect because of his continuing role as a Little Rock police lieutenant -- followed his brother to the podium. He acknowledged his relatives, thanked his brother for spearheading the public campaign for justice, and thanked Moore for the "unique gesture that no other city has dared to duplicate or achieve." Troy then captured the scenic peacefulness of the bench's placement by telling a personal story:

In search of a location for the bench, I stumbled upon a homeless man sitting on the bench previously positioned there. I was in uniform, and the man immediately started looking for his identification and explaining why he could not find it. I told him not to worry about it. When I began to tell him the reason why I was here, he completely ignored me and appeared to start daydreaming. I knew then this was an ideal place for the bench. When sitting here, you can put your mind in a place where no one (not even a policeman) can interrupt your peace.

He then issued a call to action to those in attendance:

This memorial will be remembered as another step toward healing for my family. Together, we can take the first step toward bringing our community together, to work toward bridging the gap of understanding and disconnect between law enforcement and our community. The time for talk must end. Everyone in attendance this morning has taken that first step. By your presence, you have now positioned yourself to being a part of a movement of positivity and not allowing negativity to sustain that imaginary barrier. I define this moment as a movement to recognize our issues and address them with action and not just discussion.

Troy finished with a personal pledge to continue taking part in the movement against police violence, even as he serves as a police lieutenant himself. "This ceremony marks the beginning of my official pledge of dedication to being a part of the movement, not because of, but in spite of," he said. "I have forgiven these officers for their actions and I pray for strength to continue to move forward and commit to answering the call to action."

Flint Taylor is one of the lawyers for the families of slain Black Panther leaders Fred Hampton and Mark Clark. Together with his law partner Jeffrey Haas, Taylor was trial counsel in the marathon 1976 civil trial. For more information on the Hampton/Clark case, the history of the Black Panther Party and the FBI's Program to destroy it, visit peopleslawoffice.com.