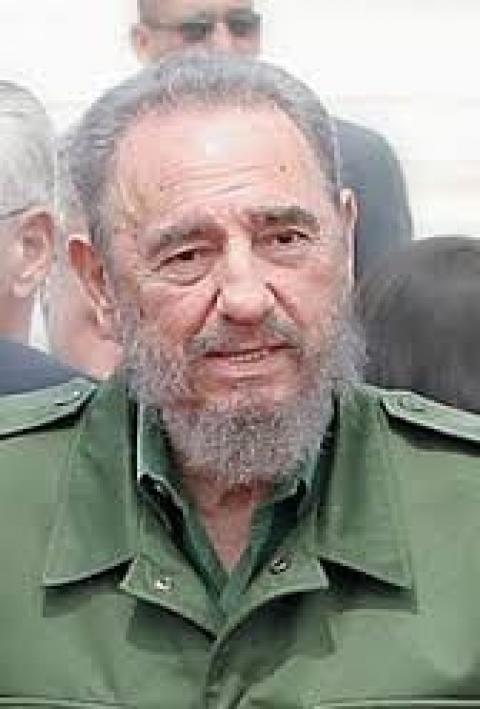 Let's avoid shilly-shallying back and forth between hailing the Comandante as "Heroic Guerrilla" and decrying another God That Failed.  Fidel Castro was a tyrant who directed a police state.  He was also a superb revolutionary leader, not just early on but throughout his exceedingly long, productive life, and neither of those statements negates the other.  Indeed, they are inextricably connected.  Why? Because the largest fact about Fidel Castro and the revolution he led is that they survived, bruised, worn down, but uncorrupted, either from within or without.  He did not turn into either Napoleon or Stalin, Cuba did not become a despotic imperial state, subjugating others.

When I say Fidel was a tyrant, I mean in the original sense of the word: a popular leader who rules by command and dispenses justice as he sees fit, brought to power by the demos (the people or the mob, depending on your perspective) and kept in power by his command over them. This is a frightening, compelling, one might have thought archaic, mode of rule, but let's have no illusions it was made anachronistic by some end-of-history bunk.

As for calling Cuba a police state:  more than fifty years ago the Cuban revolutionary government organized a disciplined system of surveillance, coercion, and repression, not because that government was evil or "totalitarian" (talk about an archaic word) but because it needed to do so simply to survive.  The United States waged state terrorism against Cuba for several decades. It outsourced the violence to gangsters, thugs, and fanatical exiles to whom it could turn a blind eye whenever convenient, to ruin Cuba's economy and kill its leaders by virtually any means-chemical warfare against its agriculture, blowing up airplanes, random murder of tourists, many, many bombings, and dozens of assassination attempts aimed at Castro himself. All this is a matter of record.  The only way for a small, poor country to resist such a campaign by a nearly-omnipotent great power only fifteen minutes away by air and ninety miles by sea was via a vigilant security apparatus.  That was the only option other than surrender. What would you have had them do?  I salute the Cubans for not surrendering, but a police state is what they got, by nature a deforming, cruel, bureaucratic apparatus, difficult to restrain. A secret policeman is a secret policeman anywhere, regardless of the justification.

Fidel Castro's life, and the example of the Cuban Revolution, demonstrates the enduring relevance of state power. It is fundamentally irresponsible for anyone on the left to think one can avoid the question of power, and let someone else face its contradictions and deformations.  Somebody will exercise it, for good or ill. Fidel Castro embraced this question, choosing to wield power in as many ways possible for what he deemed social goods, even on the global scale. That he succeeded to any extent is worth studying, just as it required to analyze when he and the Cuban Revolution failed, but in both cases it is the question of power we are studying, rather than retreating into notions of permanent insurgency or "protest," always outside of and untainted by power, which is both romantic and cynical.  These comments are directed at those whom Jacobin's Bhaskar Sunkara has called the "anarcho-liberals" who insist on standing outside the state in all possible instances, maintaining their radical (if hardly revolutionary) purity.  For many, the state is something that might someday wither away, but for now is unmovable. To them, I say, study Cuba. Study power, and how to use it better.

Here is one example of such a study. I know this history via teaching U.S.-Cuban relations. One revelation from William LeoGrande's and Peter Kornbluh's marvelous Backchannel to Cuba: The Hidden History of Negotiations between Washington and Havana (2015) is that, at every point since 1959, the Cuban government demonstrated a serious commitment to resolving their problems with the U.S. through in-depth negotiations. But only a few U.S. administrations, in particular those of Richard Nixon and Jimmy Carter, showed any real interest in resolving this particular "cold war" through mutual concessions and diplomacy between sovereign states.  Most of the time, U.S. policy resembled the classic statement from Thucydides, describing how Athens treated the small island nation of Melos: "the strong do what they can and the weak suffer what they must," meaning the options are to give in or be destroyed. The Cubans' insistence on their sovereignty, their right to make alliances and act as they saw fit, has never been accepted, except perhaps in the last years of Obama's Presidency. So much violence, so much infamy causing the U.S. lasting damage, could have been avoided, if that principle had been the basis for relations between states, but hoping for that respect was a species of romanticism in which Castro never indulged. He held out an olive branch, repeatedly, but expected the worst. The U.S. had to be taught, over and over, that the strong do not always dictate. The legacy of the Cuban Revolution is their insistence on the independence and equality of peoples.  Perhaps, in an era when neoliberal "globalization" carries all before it, that seems like an antique stance, left over from the era of anticolonial Third World revolution. I think not.

[Van Gosse is a historian and author specializing in American political development, the African-American struggle for citizenship and American society in the Cold War era and since. He is author of Where the Boys Are: Cuba, Cold War America, and the Making of a New Left, The Movements of the New Left 1950-1975, and the forthcoming We Are Americans: Black Politics and the Origins of Black Power in Antebellum America. His book Rethinking the New Left: An Interpretative History was named a CHOICE Outstanding Academic Book for 2006 and will be published in translation in the People's Republic of China.

His scholarship covers the social movements of the United States after World War II, the so-called New Left, with a particular focus on the movements "in solidarity" with social change in Latin America, from the Cuban Revolution in the 1950s through the Central American wars of the 1980s. Follow Van Gosse on Twitter: www.twitter.com/vangosse]