The System IS Rigged!—The Electoral College and the 2016 Election

The pro-Republican bias of the Electoral College derives from two main dynamics: it overweights the impact of mostly conservative voters in small population states and it negates entirely the mostly progressive votes of nearly half of African American voters, more than half of Native American voters and a major swath of Latino voters. 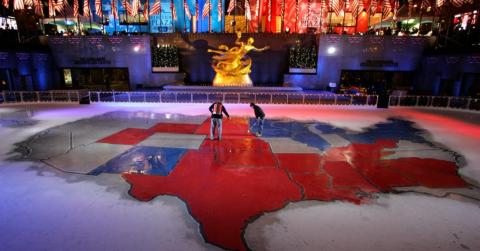 The 2016 election was only the fourth time in U.S. history that a presidential candidate has lost the popular vote but won the Electoral College, and thus the presidency. And Clinton’s winning margin of more than two million votes is by far the largest, AP

Donald Trump was right: the system is rigged! But it is rigged for the Republicans, not the Democrats, for conservatives, not progressives. And the result is the election of an extreme racist, misogynist authoritarian who may change the course of U.S. and even world history.

Belatedly we learn that Hillary Clinton defeated Donald Trump by more than two million votes, yet Trump still won the Electoral College. The public burst into an uproar in 2000 when Gore beat Bush by 550,000 votes but lost the Electoral vote. This time the public, the Clinton campaign and the press are quiet. We are glad to see Jill Stein taking the lead in contesting the vote in Wisconsin, Michigan and Pennsylvania.*

In fact the Electoral College system was created by slaveholders, and remains undemocratic and racist, and biased to the Republicans. Obama showed that the system can be overcome and even turned to our advantage, but the Clinton and Gore losses show it is an uphill climb.

The 2016 election was only the fourth time in U.S. history that a presidential candidate has lost the popular vote but won the Electoral College, and thus the presidency. And Clinton’s winning margin of more than two million votes is by far the largest of any “losing” candidate.

Why is it that, in the 21st century, the Electoral College keeps trumping the popular vote on behalf of Republicans?

The pro-Republican bias of the Electoral College derives from two main dynamics: it overweights the impact of mostly conservative voters in small population states and it negates entirely the mostly progressive votes of nearly half of African American voters, more than half of Native American voters and a major swath of Latino voters.

For decades now, with a couple of exceptions, Republicans have dominated rural areas, small towns and small population states, and the Democrats control big cities and most big population states.

Well, the Electoral College rules give as much as three times as much weight to the mainly conservative and white Republicans in the rural states compared to states with large, racially diverse and majority Democratic populations.

This is because even the tiniest state has a minimum of three Electoral College votes, based on the rule that each state is allocated Electors based on the size of its congressional delegation (Senators plus Representatives). The Constitution provides that each state has a minimum of two Senators and one member of the House of Representatives, even if its total population is less than a single congressional district in a large state. (There are approximately 710,767 people in an average congressional district.)

For example, this year just over 245,000 people voted in Wyoming yet it has three Electoral College votes: one for every 82,000 or so voters. By comparison this year more than 12 million people voted in California which has 55 Electoral votes. So California has one Electoral vote for every 218,000 voters. Thus a voter in Wyoming carries almost three times the Electoral weight of a California voter. Indeed because every state has two senators, the general rule is that the higher the population of the state, the less impact each voter in that state carries in the Electoral College.

And, since the Republicans carry all the small population states except Rhode Island and Washington D.C. (which also gets 3 Electoral votes), this rule strongly favors them. This year the Electoral outcome was able to reverse Clinton’s large popular vote margin because, for the first time in decades, the Republicans carried large population states Florida, Pennsylvania and Michigan in addition to Texas.

The Electoral College system also ensures, even requires, that given the historic racial voting polarization, about half of all voters of color be marginalized or totally ignored.

Approximately 55 percent of all Blacks live in the southern states, and for decades they have voted about 90% Democratic in the presidential races. However, the pattern since 1960 is that white Republican voters defeat them in every southern and border state except Maryland and Virginia, and (in 2008) North Carolina. While whites voted 58% for Trump nationally in 2016, southern whites gave him over 70 percent of their votes. The white vote has been approximately the same since 1980.

Thus all Southern Electoral College votes except those of Maryland and Virginia went to Trump and the votes of almost half of African American voters basically do not count according to the College rules.

For example, Blacks constitute about 36% of the Mississippi electorate, the highest Black voter percentage in any state in the country. About ninety percent voted for Clinton. But whites are 64% of the state’s voters, and about 90% chose Trump. Trump therefore handily won 58% of the state’s total vote and all of its Electoral College votes.

In 2016, as for decades, the Electoral College result was the same as if Blacks in all the southern states except Virginia and Maryland had not voted at all.

Similarly negated were the votes of millions of Native American and Latino voters who live in overwhelmingly white Republican states like Arizona, Nevada, Oklahoma, Utah, the Dakotas, Montana and Texas. Further, the peoples of Puerto Rico, the U.S. Virgin Islands, American Samoa and Guam—territories ruled by the U.S.—get no Electoral College votes at all. The tyranny of the white, conservative majority prevails.

Thus, the Electoral College system violates the principle of one person, one vote, drastically undermines the impact of the Black vote and gives the Republicans a major advantage in presidential contests. Its abolition should be a key part of the progressive agenda.

Slaveholder Origins of the Electoral College

The Founding Fathers, led by slaveholders such as George Washington, Thomas Jefferson, James Madison and James Monroe, invented the Electoral College out of thin air to serve their interests.

They codified the notorious idea that slaves were non-humans, and thus deserving of no constitutional or human rights. The one exception to this rule was the constitutional provision that slaves were to be counted as three-fifths of a person, solely for the purpose of determining how many congressional representatives each state would be allotted. Thus, even though slaves had no right to vote, the three-fifths rule vastly increased the slave states’ power in the House of Representatives and therefore the Congress.

The Electoral College, in which each state receives a number of Electors equal to their congressional delegation, was invented as the institutional means to transfer that same pro-slavery congressional allocation to determining the presidency. Slaveholders held the presidency for 50 of the 72 years before Abraham Lincoln, who was elected in 1860, became the first U.S. president to oppose the expansion of slavery. The South, accustomed to wielding political power through the selective enumeration of slaves, promptly seceded.

Since the end of slavery the Electoral College has remained a racist and conservative instrument. It has given the Republicans a running head start to win the presidency ever since reactionary Southerners switched en masse from the Democratic Party to the Republican Party in protest of the 1960s civil rights legislation.

The Electoral College is one of the most powerful legacies of slavery in the U.S.

The system is rigged! And changing the system would take a constitutional amendment approved by three-fourths of the states. Consequently we are in an uphill battle that, if we master Electoral College strategy the way Obama did, we can win. Although the Electoral College is not on our side, history, including the rising progressive electorates, is.