Socialists must work with all levels of the labor movement. Calling for an “insurgency” within the labor movement doesn’t further that goal. The Trump onslaught against unions will come immediately after he assumes office. While supporting strong rank-and-file we must work with anyone we can, including International leaders who supported Hillary. To do otherwise weakens us in this fight for union survival. And the work of Labor for Bernie proves it can be done. 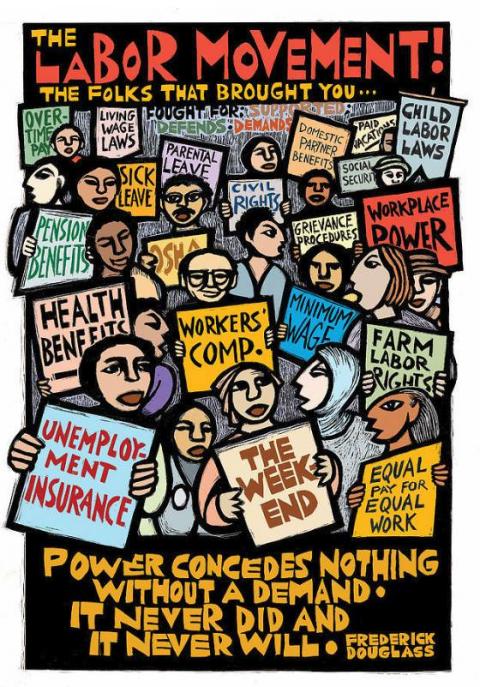 DSA Political Committee’s statement on the election on Nov. 16, 2016, was quite strong, pointing out a path by which to build in unity against the dangers posed by the Trump Administration. One paragraph, however, stood out as an exception in tone and tenor from everything else — the paragraph on labor. We find these the views expressed there to point in a unproductive  direction that could hurt our future work with the labor movement and inhibit building a political alternative.

Below we offer a critique of that paragraph and a proposal for a different approach in the spirit of encouraging a needed discussion throughout the labor movement on our strategic choices in the future. Although we raise specific suggestions to guide DSA’s union work, and the matter at hand might seem purely internal, we believe the issues at hand are relevant far beyond our ranks.

“Further, Trump will move quickly to destroy organized labor in the United States, particularly in the public sector. We must resist, though our efforts will be complicated by the AFL-CIO’s self-defeating conciliatory stance toward the President-elect. Unions are the most powerful tool we have for building inter-racial solidarity among working class people around a shared economic interest. The questionable strategic and tactical choices made by much of their leadership both to support Clinton in the Democratic primaries and to commit themselves to working with Trump show the absolute necessity of a bottom-up left insurgency within the house of labor.”

The federal sector is already right-to-work. The Republicans have clearly stated that they intend to declare war on federal workers and their unions (Trump will be the boss of Executive Branch workers). A couple of discreet pieces of legislation that have been floating around for several years on Capitol Hill aimed at busting federal unions will probably be resurrected and, with Trump in the White House, we are in real trouble. Federal workers could easily be without a union in a year.

Although the TPP has been stopped for now, private sector workers will find continual new obstacles in their way. Likely changes in a new Department of Labor will make the fight against wage theft harder, likely changes in the NLRB will turn back steps forward in protecting organizing initiatives. Public sector workers will face one of many “Friedrich”-like cases that are in the pipeline; with the appointment of a conservative Supreme Court Justice they will likely lose, making all state and local government right-to-work. Moreover, Wall Street and corporate power that have been behind the unrelenting drive to undermine union strength in the US and around the world will see this as an opportunity to further their direct attacks on collective bargaining and on union rights.

Socialists must try to work with all levels of the labor movement. Calling for an “insurgency” within the labor movement doesn’t further that goal. Moreover, it ignores or (in essence) disparages the work of unionists at every level of the labor movement who have been keeping the movement alive. And rest assured, notwithstanding weaknesses and limitations, most unions are involved in progressive initiatives, whether they supported Hillary or Bernie, or stayed on the sidelines. The endorsement of Keith Ellison for DNC by the AFL-CIO, proceeded by announced support for him by the International Presidents of AFSCME, AFT (which both endorsed Hillary) and CWA is extremely significant,

However, that doesn’t mean rank-and file control of unions is not essential. It is critical for a healthy union to not only defend workers rights and but to go on the offensive. For DSA to have any influence in this area we have to be involved in local unions. How many DSA members are active union members? How many are shop stewards, local officers or members of local union committees (staffers are also important but can be severely limited in any independent political work). Where we have a concentration they should be helping to build a strong and involved rank-and-file. Sometimes this will take the form of an insurgency and sometimes it will support progressive initiatives of the International leadership, adding real power to these initiatives.

Moreover, we should be a force for genuine labor unity by building ties between unions representing workers in the same sector or industry; a genuine force for unity by challenging hostility to immigrants and Muslims, and the racism and sexism that influence sections of working people, including union members.

The Trump onslaught against unions will come immediately after he assumes office, probably through executive orders in the first days of his administration. While supporting strong rank-and-file we must work with anyone we can, including International leaders who supported Hillary. To do otherwise otherwise will weaken the chance of labor’s survival. The statement concerning labor in the Political Committee is roadblock to this effort.

The work of Labor for Bernie shows the possibilities of building change within organized labor. The perspective put forward by CWA, NNU, ATU, APWU, the independent UE and ILWU and that of numerous leaders and members at every level of the union movement inside and outside the AFL-CIO point in the direction of defending labor by building solidarity with other social justice movements.   Without underestimating the defeats and setback unions have suffered, the weaknesses and divisions in our ranks or the instances of failure in leadership or direction, we can also point to genuine achievements. The Chicago Teachers Union’s strike, CWA’s successful national strike at Verizon, the NNU’s and other unions’ organizing drives, the Fight for 15, campaigns led by Jobs with Justice, the National Domestic Workers Alliance, the National Day Laborers Network are amongst a few of the many examples of the kind of struggles that have won real victories, even in a period of reaction, and serve as a reminder of labor’s potential strength.

As such, DSA makes a priority of support for the core demands of progressive union leadership:  challenge every step that strengthens the power of Wall Street and of the “1%.,” over and against working people.  We hold Trump to account in his demagogic promises of job creation, without giving in one inch to his bigotry, to his attacks on Muslims, to his anti-immigrant proposals.  We join with all labor to resist privatization, to resist all anti-union measures aimed at public or private sector workers.  Programmatically we join other unionists in defending our tattered social safety net and to expanding it especially in the struggle to make healthcare a right.  We encourage DSA locals to act in solidarity with strikes, organizing drives, low-wage workers campaigns, and local labor legislative initiatives in their communities.  We push our unions to join in the fight within the Democratic Party for a change in its direction and support inside/outside and independent political initiatives wherever they have a base amongst working people.  We will work to build stronger ties between unions and other social movements including continued defense of those who successfully stopped the North Dakota pipeline in support of Native rights and environmental justice.

DSA union members should combat any manifestation of racism and sexism amongst our co-workers, and work to build membership involvement at every level of union decision-making with the understanding that union democracy is essential to union strength, indeed, to union survival.

Carl:  I have been involved as a labor activist for over 40 years, starting as rank-and-file organizer and an activist a various strike-support efforts. Most of my time since then has been spent as a staffer and elected official primarily at the local level. For last twenty-seven years I have been the Executive Director of AFSCME Council 26, a small labor organization representing federal employees, primarily in the Washington, DC area. As such, I work closely with an elected President who is also a working federal employee and answer to a rank-and-file Executive Board. I am also an elected executive board member of the Metropolitan Washington Council, AFL-CIO, the local central labor council.

I was not happy when my International Union endorsed Hillary Clinton over Bernie Sanders and had worked for a different outcome. However, as much as I think that they made the wrong decision, I am more concerned with what the my Union does in the future. I am supporting my International Union’s and the AFL-CIO’s effort to get Keith Ellison elected as DNC and will encourage joint work with Unions and other forces that supported Bernie to push a progressive, anti-neoliberal agenda involving the labor movement .

Kurt: I was active in the labor movement for decades, primarily in the private sector as a rank-and-file member, steward, staff member, and elected officer. Currently I work with unionists the DC Metropolitan area on reentry issues, education programs, and other labor-community initiatives.

Away by necessity from direct engagement with union issues for many years, I was dismayed at the degree to which many once proud and militant local unions with which had worked in the food sector had been undermined by the combination of job loss and unrelenting employer attacks. Yet I also saw that the labor movement at all levels has evolved in a progressive direction, with an openness to socialist ideas (made manifest by support for Bernie), scarcely imaginable when I became an active unionist in the 1970s.   Currently, I participate alongside elected labor leaders, staff and members organizing around a broad range of social justice issues and bread-and-butter union concerns. Together, this is at the heart of what a left-wing unionism should look like.