Hollywood’s Hidden Hispanics: Why LA’s Latinos Are Invisible on Screen 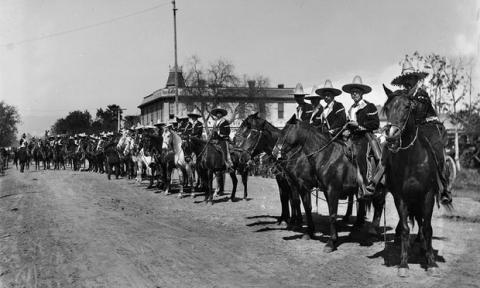 Mexican caballeros line up in 1903 for La Fiesta de Los Angeles, a celebration of the city’s many cultures. , Alamy Stock Photo

Now here’s a pitch for a movie. An aspiring US politician announces that, if elected, he will build a mighty wall to prevent Latin Americans from entering his country. To everyone’s surprise, this guy gets elected and very soon finds out, as he tries recruiting in Los Angeles, that the only people he can get to do such poorly paid and onerous work are… Latin Americans. Sort of a dark comedy? Maybe a big Latino star as one of the building workers? Nice mariachi soundtrack?

Or maybe not. Because there already seems to be a large and forbidding wall, albeit an invisible one, that prevents Latinos, who now make up approximately half of the LA population, from featuring in films about the city.

There have been three high-profile productions this year in which Los Angeles has played a starring role: Hail, Caesar!, Café Society and La La Land, the last of which has high hopes as we enter the awards season. Yet none of the three casts much light on the millions of Latinos who live, work and play in the capital of film. How so?

There have been films in which Latinos have played a leading role but few have had the sort of box office returns that attract the big studios. Most recently, in 2014, Diego Luna, who came to international fame along with his co-star, Gael García Bernal, in Y Tu Mamá También in 2002, directed an eponymous biopic of the celebrated farm-workers’ union organiser, Cesar Chavez – in many ways the Latino equivalent of Gandhi or Mandela, who have both had reverential film treatments. It had a very cool reception.

Writing in Variety at the time of its release, Peter Debruge described it thus: “Recognising that Chavez’s victory in earning equal rights for migrant workers remains scandalously under-taught in classrooms, director Diego Luna responds with a biopic that feels more polite than political, counting on the worthiness of his subject and the participation of a well-meaning ensemble to galvanise mostly Latino audiences.”

Luna could be congratulated for at least getting the film made as – tellingly – the idea had been floating around Hollywood for decades. But it is significant that he is Mexican rather than an Angeleno, and his presence as director was a reflection of the fact that most of the leading Latino film names such as Bernal, Salma Hayek, Antonio Banderas and Javier Bardem come not from LA but from Latin America or Spain. Three currently high-profile, Oscar-nominated directors – Alejandro González Iñárritu, Guillermo del Toro and Alfonso Cuarón – are all Mexican-born, so things have certainly changed in some respects; 20 years ago, a now esteemed Mexican cinematographer was told on entering an LA agency that they did not need a gardener, thank you.

This year the main Oscars controversy focused on the lack of black faces, yet in 2014, Chris Rock – the black comedian, actor and this year’s Academy Awards host – wrote in the Hollywood Reporter: “Forget whether Hollywood is black enough. A better question is: is Hollywood Mexican enough? You’re in LA, you’ve got to try not to hire Mexicans.” 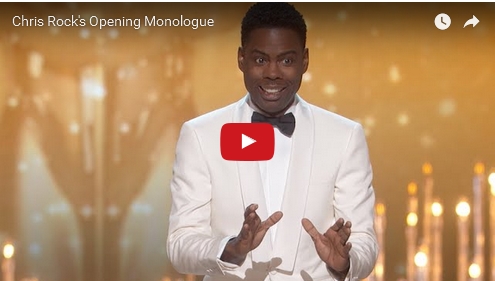 This theme was taken up last February by Los Angeles Times writer Hector Becerra in an article headlined “A film brownout – Latinos largely left out of even cliched supporting roles”. The parts that seem to be available for a Latino actor are most often that of a maid, a gardener or a gang member.

Becerra told the Observer: “Latinos in America occupy this spot where their American-ness seems to be in silent dispute – and sometimes not so silent. Because immigration has never ended, though it has abated compared to previous levels, there’s this lingering perception that we’re sort of foreign. It’s also an issue with Asian-Americans, I’m sure. I suspect that bleeds into popular entertainment. There’s generally just a lack of nuance with portrayals of Latinos in American films – if they’re portrayed at all.” He did note that the last two Star Wars movies featured characters played by Latinos, including Diego Luna in Rogue One, but added: “In general, I think Hollywood doesn’t really know what to do with Latinos beyond roles that emphasise their ethnicity.”

In Cannes last year, Salma Hayek spoke entertainingly about the way Latinos were still perceived in the industry. She recounted an incident in which a studio executive told her she could have been the biggest star in America, but her Mexican accent might remind people of their maids. She added that she had also been tipped to star in a sci-fi film but the director had run into that brick wall of preconceptions: “They said to him, ‘a Mexican in space?’”

The delicate issue of Latinos and the US film industry goes back nearly a century. In the 1930s, Spanish language versions of big Hollywood movies were shot at night on the same sets as the English-language ones. Lupita Tovar, who died last month aged 106, starred in 1931 in a Spanish-language Dracula, acting by night on the same set as Bela Lugosi did by day.

There have been some great and highly regarded Latino films over the last three decades. El Norte, directed by Gregory Nava in 1983, told the story of illegal immigrants whose plight was summed up by Rosa, played by Zaide Silvia Gutiérrez, in a way that still has an echo: “Here in the north, we aren’t accepted. When will we find a home?” It was nominated for a best screenplay Oscar. La Bamba (1987) was the admired biopic of Ritchie Valens, the musician who died with Buddy Holly in the 1959 plane crash. Born in East LA (1987) featured the comedian, Cheech Marin, better known to many old hippies as half of the Cheech and Chong standup duo. Stand and Deliver, starring Edward James Olmos in 1988, also packed a powerful punch. Mi vida loca (1993), directed by Allison Anders and promoted with the tag-line “mothers, warriors, sisters, survivors”, featured a largely unknown cast and a very young Salma Hayek. Ten years ago, Wash Westmorland and the late Richard Glatzer directed Quinceañera, a charming tale about the 15th birthday party of a girl played by Emily Rios that won critical acclaim but was made on the tiniest of budgets. In 2011, A Better Life told the story of a Mexican immigrant gardener trying to make a better life in LA for his sceptical teenage son. With their Latino themes ignored by the mainstream, many of these films have have been promoted instead by the Sundance and Telluride film festivals.

Sometimes the stories have been told by foreign directors: Britain’s Ken Loach made Bread and Roses in 2000, from a story by Paul Laverty, about a strike by Latino janitors in LA. The idea came to Laverty when he was on his way home from a Beverly Hills party and noticed that all of his fellow bus passengers were from central America. “It was this very odd image,” said Laverty. “These people were working at some of the richest real estate in Los Angeles and having to wait for hours to get a bus home at night. They were an invisible army working for some of the richest lawyers and agents in the world.” Laverty recalled how surprised the extras, mainly LA cleaners, were when they saw the film for the first time. “It was amazing watching their faces. One of them said to us, ‘I never expected to see ourselves on screen.’”

There is a parallel universe of successful Spanish-language films shown in Latino neighbourhoods that operate beyond the radar of the big studios and in which soap stars play the main roles. And there have also been many fine films about crossing the border – most recently Cary Fukunaga’s Sin Nombre (2009) – but Los Angeles on film remains a much whiter place than its reality.

“That’s LA – they worship everything and they value nothing,” says Sebastian, the jazz musician played by Ryan Gosling in La La Land. This is unfair on LA, a much more interesting and elusive city than the “Tinseltown” putdown gives it credit for, but with that wall about to raise tensions across the borderline states and beyond, now would seem to be the time for Hollywood to grant much greater value to the invisible army in its midst.

Jack Nicholson is private eye J.J. Gittes, hired to trailing LA’s chief water engineer Hollis Mulray at the height of the water wars on the 1930s.

Woody Allen’s art deco-inspired, jazz-soundtracked homage to 1930s Hollywood stars Jesse Eisenberg as nebbish Boby Dorfman, the son of a Bronx jeweller who tries his luck in Hollywood. Bobby is smitten with his uncle’s secretary, Vonnie (Kirsten Stewart), who keeps him at arm’s length until, dumped by her boyfriend, she turns to him for comfort.

Duncan Campbell is a freelance writer who worked for the Guardian for more than 20 years, as crime correspondent and Los Angeles correspondent. He previously worked for City Limits, Time Out and LBC. He is the author of two novels, If It Bleeds, published in 2009, and The Paradise Trail, (2008) and five non-fiction books, including The Underworld and That Was Business, This Is Personal.

…we have a small favour to ask. More people are reading the Guardian than ever but far fewer are paying for it. And advertising revenues across the media are falling fast. So you can see why we need to ask for your help. The Guardian's independent, investigative journalism takes a lot of time, money and hard work to produce. But we do it because we believe our perspective matters – because it might well be your perspective, too.

If everyone who reads our reporting, who likes it, helps to pay for it our future would be much more secure.

Become a supporter
Make a contribution