100 corporate CEOs possess company retirement funds totaling $4.7 billion - an amount equivalent to the entire retirement savings of 41 percent of U.S. families. Things were not always like this. From 1946 to 1980, a combination of union action and government policy led to the expansion of pension benefits for American workers. Now, Donald Trump's pick to direct the Office of Management and Budget says: We have to end Medicare as we know it. 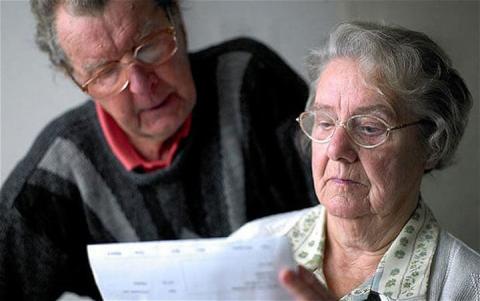 ., LA Progressive
The Scandal of Vast Inequality in Retirement Pay
By Lawrence S. Wittner
December 21, 2016
LA Progressive
Cate the Elder, a Roman senator and historian, once remarked:  "Cessation of work is not accompanied by cessation of expenses."  For centuries, retirees have been aware of this unfortunate fact, which led them to demand and, in many cases, secure old age pensions to help provide financial security during their "golden years."  But as indicated in a recently-released report by the Institute for Policy Studies (IPS), the financial security of retiring corporate CEOs is far, far greater than the financial security of average Americans.
According to the extensively researched IPS report, A Tale of Two Retirements, 100 corporate CEOs possess company retirement funds totaling $4.7 billion?an amount equivalent to the entire retirement savings of 41 percent of U.S. families (50 million families, including 116 million Americans).  The retirement funds of these 100 CEOs are also equivalent to those of 75 percent of Latino families, of 59 percent of African-American families, of 55 percent of female-headed households, and of 44 percent of white working class households.
Indeed, the top 100 CEO nest eggs, if averaged, would generate a $253,088 monthly retirement check to these 100 individuals for the rest of their lives.  By contrast, workers who had 401(k) pension plans at the end of 2013 had only enough in these plans to pay them an average monthly benefit of $101.  Of course, these were the lucky ones.  Among workers 56 to 61 years old, 39 percent had no employer-sponsored retirement plan at all, and would likely depend on Social Security, which pays an average of $1,239 per month, for retirement security.

Although changes in public policy could close the widening pension gap, such changes do not seem likely to occur while a zealously pro-corporate party controls the White House, Congress, and the courts.

Of course, these are only averages.  When one looks at individuals, the contrasts are even starker.  Glenn Renwick, the Progressive Insurance Company's CEO who retired in 2016, receives a monthly retirement check from his company for $1,035,733.  Among Walmart's 1.5 million employees, fewer than two-thirds have a company-sponsored retirement plan and, if they do, it will pay them, on average, only $131 per month.  But Walmart's CEO, Doug McMillon can expect to receive at least $360,000 per month?more than 2,700 times the amount a typical Walmart worker with a 401(k) account can expect.  And there's also CEO David Cote of Honeywell - a company that has locked out its workers from its factories in Green Island, NY and South Bend, IN for seven months for rejecting a contract that eliminated workers' pensions who receives a monthly retirement check from the company for $908,712.
Or take the case of John Hammergreen, CEO of the McKesson corporation, a drug wholesaling giant.  A few months after Hammergreen arrived at McKesson in 1996, the company froze its employee pension fund, closing it to workers who came there in 1997.  Even so, the company launched a lavish Executive Benefit Retirement Account that enriched Hammergreen's pension with an average of $22,000 a day for the next 20 years.  Thus, today he receives a monthly retirement check from the company for $782,339.
Things were not always like this.  From 1946 to 1980, a combination of union action and government policy led to the expansion of pension benefits for American workers.  By 1980, 46 percent of private sector workers were covered by defined benefit pensions.  But, in the following decades, declining union strength, corporate attacks on pension funds, and government action resulted in a severe erosion of worker retirement security.  By 2011, only 18 percent of private sector workers were covered by defined benefit plans.
As demonstrated by the authors of the IPS report, the growth of economic inequality in retirement provisions resulted from rigging things in favor of CEOS through new rules for pensions, taxes, and executive compensation.   "Since more than half of compensation is now tied to the company's stock price," the authors note, "CEOs have a powerful personal incentive for slashing worker retirement benefits in order to boost the short-term bottom line.  Every dollar not spent on employee retiree security is money in the CEO's pocket."
Although changes in public policy could close the widening pension gap, such changes do not seem likely to occur while a zealously pro-corporate party controls the White House, Congress, and the courts.  Indeed, as the authors point out, thanks to the shielding of enormous CEO income in tax-deferred accounts, Fortune 500 CEOs will see very substantial gains in their retirement checks if President Trump succeeds in implementing his plan to slash the top marginal income tax rate.
It's possible that, in the long run, the rising tide of retirement insecurity will spark a revolt challenging the severe economic inequality between corporate CEOs and their American workers.  Until then, however, it's tempting to propose updating Jonathan Swift's eighteenth century satirical suggestion, made in A Modest Proposal, that poverty among the poor might be alleviated by selling their babies as food for the rich.  Perhaps, in twenty-first century America, retirement insecurity might be alleviated by selling elderly workers to the corporate rich, who could use them for the burgers sold by their fast food companies.
[Lawrence Wittner is Professor of History emeritus at SUNY/Albany. His latest book is a satirical novel about university corporatization and rebellion, What's Going On at Aardvark?]
[Thanks to the author for sending this to Portside -- moderator]
Trump's Pick For OMB Director Has Vowed To 'End Medicare As We Know It'
By Tierney Sneed
December 20, 2016
Talking Points Memo 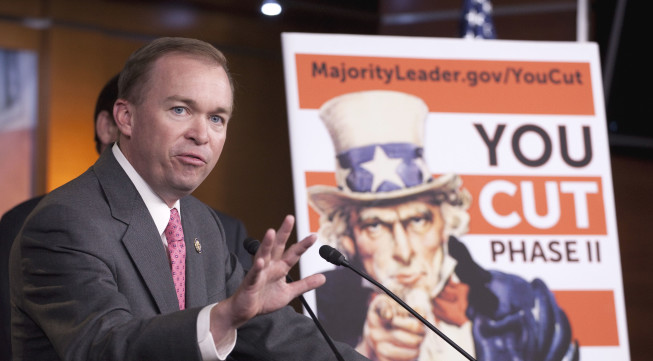 credit: Harry Hamburg // Talking Points Memo
Rep. Mick Mulvaney (R-SC), President-elect Donald Trump's pick to direct the Office of Management and Budget, has been an ardent supporter of budget proposals that would privatize Medicare and has made overhauling the program a key issue in his approach to governance.
"We have to end Medicare as we know it," Mulvaney said in 2011.
A Tea Party budget hawk who led the opposition to many of the funding compromises during the Obama era, Mulvaney vocally championed proposals by then-Budget Committee Chair Paul Ryan (R-WI) and others to privatize Medicare or impose other major changes to the program. He relentlessly argued that cutting retirement programs like Medicare was the only way to "balance the budget," the Tea Party call to arms. He hasn't been shy about calling for a drastic refashioning of Medicare.
"Medicare as it exists today is finished," Mulvaney said at a townhall in 2011. As OMB director, Mulvaney would have major sway within a Trump administration, and would play a key role in determining the administration's position on mandatory programs like Medicare and Social Security, which Mulvaney once called a "Ponzi scheme." The post requires confirmation by the Senate.
"The OMB director is one of the three most senior economic advisers to the President. In that role as an advisor to the president, he or she has a huge influence on all policy matters," said Ken Baer, a former associate director at OMB in the Obama administration. "OMB director also has a huge influence over Medicare policy. Next to the [Centers for Medicare & Medicaid Services] administrator, who actually administers the program, and along with [Health and Humans Services] Secretary, OMB director is equally important."
Soon after Mulvaney was elected to Congress in 2010, he became a major cheerleader for Ryan's "Path to Prosperity" budget plan, which would have phased out Medicare by giving participants vouchers to use on marketplaces where insurers would compete to offer private plans.
Responding to President Obama's claims that the plan would "end Medicare as we know it." Mulvaney agreed with the assessment, but argued that it was necessary "because the Medicare that we know it is broke in about nine years anyway. " 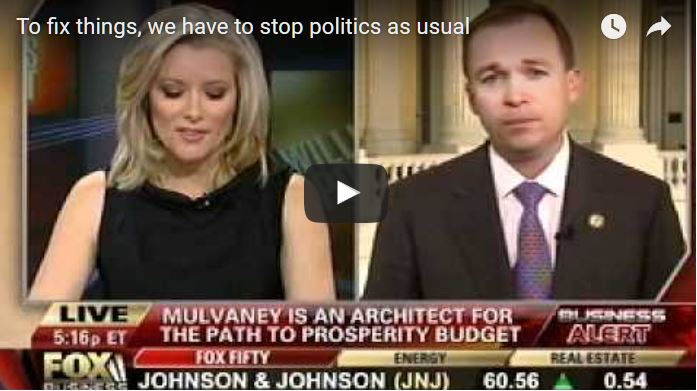 Listen here.
"We have to end Medicare as we know it. We have to fix it," he said, while pushing back on the use of the term "voucher." (Conservatives prefer to call their system "premium support.")
Mulvaney wore his vote for the plan as a badge of honor.
"There was a group of Republicans in the House of Representatives who voted to dramatically overhaul Medicare and Medicaid and lightning did not strike us," he said after a 2011 vote for Ryan's plan. "If that is not a sign that maybe things can be different around here, I don't know what is."
He took this message with him to town halls, where he told constituents that he favored means-testing for Medicare and Social Security, while arguing that "we will never, ever balance the budget until we change entitlements."
"You have to raise the retirement age, lower a pay-out, change the reimbursement system. You simply cannot leave it the way that it is," he told Bloomberg News in 2011.
As the fights over budgets and the so-called grand bargain on fiscal matters escalated in the ensuing years, Mulvaney also became one of the loudest members in the House's far-right wing who had no problem toying with not raising the debt ceiling -- and risking financial chaos -- if they didn't get the spending cuts they wanted. He also put himself to the right of even Paul Ryan by the time Ryan introduced the 2013 version of his fiscal blueprint, which still included a major overhaul to how Medicare was administered.
"We've changed," Mulvaney said to explain his and other members' dissatisfaction with the bill. He and other hardliners in the House voted against the major budget deals that were painstakingly put together by then-Speaker John Boehner, in part because the conservatives said the compromises didn't go far enough in cutting programs like Medicare.
"You can't cut the discretionary spending," Mulvaney said in 2013. "You can't do this forever based on discretionary spending. You're going to have to get to entitlements."
Trump's selection for OMB director comes as other budget hawks, including Ryan and Rep. Tom Price (R-GA), who Trump has tapped to head the Department of Health and Human Services, have said they intend to move forward with plans to overhaul Medicare. Republicans in the Senate so far have appeared reluctant to take on efforts to privatize Medicare. The Trump transition team did not respond to TPM's inquiry as to what Trump's pick of Mulvaney meant for his plans on Medicare.
Not too long ago, Trump mocked GOP politicians for making cutting Medicare and Social Security their raison d'etre.
"Every Republican wants to do a big number on Social Security, they want to do it on Medicare, they want to do it on Medicaid," Trump said on campaign trail in April. "And we can't do that. And it's not fair to the people that have been paying in for years and now all of the sudden they want to be cut."
[Tierney Sneed is a reporter for Talking Points Memo. She previously worked for U.S. News and World Report. She grew up in Florida and attended Georgetown University.]