Progressives who treat anti-Russia propaganda spin as fact, in order to weaken Trump, are encouraging a kind of McCarthyism. Of all the good reasons to “delegitimate” Trump, alleged Kremlin intervention in the election should rank low. Focus should instead be on his greed, pathological lying, enthusiasm for oligarchy, bigotry, environmental destruction, racism, misogyny, economic injustice, voter suppression and rampant conflicts of interest. 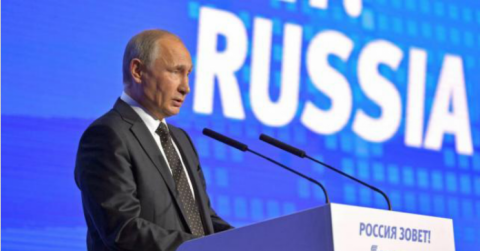 This week began with a mass email from the head of the Democratic National Committee, who declared: “By now, Americans know beyond any reasonable doubt that the Russian government orchestrated a series of cyberattacks on political campaigns and organizations over the past two years and used stolen information to influence the presidential campaign and congressional races.” DNC chair Donna Brazile went on: “The integrity of our elections is too important for Congress to refuse to take these attacks seriously.”

The importance of election integrity had eluded Brazile when she was a regular on CNN, posing as neutral in the Clinton-Sanders battle. “Brazile is not apologizing for leaking CNN debate questions and topics to the Hillary Clinton campaign during the Democratic primary,” the Washington Post reported last month. “Her only regret, it seems, is that she got caught.”

Many big factors affect any presidential race, and the Russian government may have tried to be one of them for the 2016 election—though it’s hardly the slam dunk that agencies like the CIA and U.S. mass media are now claiming. But in any event, this month it has become routine for a lot of progressive organizations and individuals to descend into a dangerous mode of partisan flackery.

Less than two weeks ago—as soon as unnamed CIA sources told journalists that the Kremlin was behind hacks of DNC and Clinton campaign emails—a wide range of progressive online groups, activists and commentators reflexively embraced the dominant media spin. High profile among them was MoveOn, which used its big digital footprint to spur the frenzy.

MoveOn matter-of-factly decried the "chilling news" of "Russia's election tampering." And, without a hint of media literacy, the group also informed its readers that "news broke that the Russian president himself was involved in the efforts to influence our November election—in favor of Donald Trump."

Such eagerness to share undocumented spin as absolute fact has led many progressive groups to go with knee-jerk reactions. Bent on gaining a propaganda advantage over Trump, those reactions are helping to stampede this country toward a modern form of McCarthyism—as well as brinkmanship with Russia that could lead to a cataclysmic military conflict.

Zeal to blame Russia for a bad election outcome has spread like contagion among countless self-described progressives, understandably appalled by the imminent Trump presidency. But those who think they're riding a helpful tiger could find themselves devoured later on.

If civil liberties instead of repression and diplomacy instead of war are progressive values, then all too many progressives—eager to tar Trump as a Kremlin product—have been undermining those values.

Days ago, assessing the momentum of that hysteria, Russian studies scholar Stephen F. Cohen cited some of the key motives propelling it (the first of which touted extremely farfetched  hopes):

Thus, countless Bernie supporters have been unwittingly strengthening the Clinton wing of the party while beating on the anti-Putin drum.

Of all the good reasons to “delegitimate” Trump, alleged Kremlin intervention in the election should rank quite low. Trump’s evils are huge, with a very incomplete list including vast greed, pathological lying, contempt for facts, enthusiasm for oligarchy, bigotry, environmental destruction, racism, misogyny, economic injustice, voter suppression and rampant conflicts of interest.

While echoing the anti-Russia themes belted out by Democratic Party officials and loyalists, the chorus on the left may think it’s merely grabbing the low-hanging political fruit of this historical moment. But the fruit is already turning rancid, and apt to become poisonous. It won’t be the first time in recent decades when liberals and others thought they were being clever and politically adroit as they aided and abetted the suppression of principles found in the First, Fourth and Fifth Amendments, while helping to gear up the machinery of war.

This month, by following the line of the Democratic Party leadership, groups like MoveOn actually have helped to set the stage for pressurizing Trump to deter him from pursuing policies that may be (along with opposition to trade deals such as the TPP) the only ways in which he might be appreciably better than Hillary Clinton would have been as president.

Let’s face it: Some of the fierceness of media attacks on Trump, such as from de facto neoconservative liberal-tinged entities like the Washington Post, is propelled by rage that his stance toward Russia lacks the neocon qualities that a Hillary Clinton presidency offered.

To be crystal clear: The election of Donald Trump as president is a horrific disaster, and his regime must be resisted on a vast array of issues with eternal vigilance. And, meanwhile, Vladimir Putin is a repressive ruler.

At the same time, it’s a rather glaring omission in the current outraged discourse that the U.S. government, from Egypt and Saudi Arabia to Central Asian nations and beyond, continues to avidly support regimes far worse than Russia’s. As for intervening in foreign elections, the CIA has excelled at that anti-democratic game for many decades—and mainline U.S. media outlets have been inclined to nod or even cheer when the American government and allied U.S. operatives succeed in working their will on electorates overseas.

Oh, and must we forget that U.S. efforts to determine the government leaders of other countries have sometimes gone far beyond techniques like hacking and disseminating emails? As Janine Jackson of the media watchdog group FAIR wrote, “in back of it all, what makes the umbrage of elite media so hard to stomach is the hypocrisy. This is, after all, the same elite media that supports outsider-induced ‘regime change’ anywhere and everywhere they see an official enemy, from Iraq to Honduras to Libya to Syria… You can make ‘one law for me, another for thee’ your credo, but you can’t be too surprised when others are unimpressed.”

And Jackson added: “Whatever story there is to be told about Russia and the 2016 election, corporate media have squandered the credibility it would take to tell it.”

Now, a crucial choice is right in front of the progressive groups and commentators who've been echoing the anti-Russia barrage from U.S. mass media. Staying on course will help to undermine civil liberties at home and will help to escalate conflicts with Russia that could end with nuclear war. Doesn’t sound “progressive” to me.

Norman Solomon is co-founder of RootsAction.org and founding director of the Institute for Public Accuracy. His books include “War Made Easy: How Presidents and Pundits Keep Spinning Us to Death” and "Made Love, Got War: Close Encounters with America's Warfare State".