After the election, many on the Black Left are once again grappling with the “race vs. class” debate. 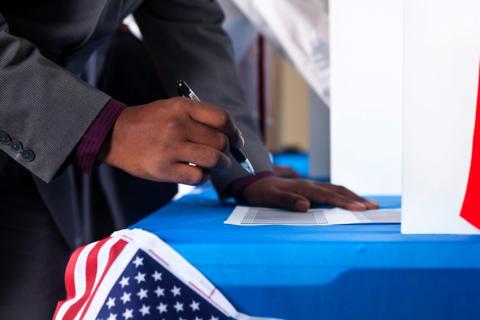 Are Black voters too ready to fall for cynical appeals to identity?, ASISEEIT/Getty Images

The term “identity politics,” like a tether ball, is getting smacked around by players on all sides. Although the term has shifting connotations, it generally refers to a heightened focus on the political interests of marginalized groups like women, racial minorities and LGBT folks.

No question, we need to build a broad, inclusive movement of people opposed to the manifold threats Trump poses.

Bernie Sanders smacked it from the left during a controversial post-election speech in Boston, when he said in response to a Latina’s question, “One of the struggles that you’re going to be seeing in the Democratic Party is whether we go beyond identity politics.” New York Times columnist David Brooks joined the Washington Post’s George Will in slamming it from the right. These marquee post-mortems see identity politics as the Democrats’ current bête noire. Some even blame it for Hillary Clinton’s loss, in line with a popular narrative that “political correctness” is a major irritant to the white working class.

Many on the Left criticize Clinton for downplaying economics in favor of anti-racism and anti-sexism. They believe she saw a road to power through a new American majority of Blacks, Latinos, women, youth and labor, and tried to appeal to different segments through targeted marketing rather than an overarching theme of systemic change—which could have brought in the white working class. University of Illinois professor and socialist Walter Benn Michaels has been urging a shift in focus from identity to inequality for more than a decade. He told the Chicago Reader in a post-election interview, “In the current practical moment, half the people the [Clinton campaign] accused of being racist are people who should be voting for the Democratic Party.”

Other critics see such arguments as part of a backlash. “When the alt-left says ‘identity politics,’ what they actually mean is civil rights,” writes blogger Marcus H. Johnson on AlterNet. “They want marginalized groups to stop fighting for civil rights because that would upset poor white people who might otherwise vote Democratic.”

For many Black activists, it’s absurd to question the primacy of race in America. Africans were abducted and enslaved; the struggle to address that monumental injustice has propelled Black activism ever since.

Despite that clear origin, a debate about the function of identity politics is also taking place within the Black Left, although the term is shaded with a different nuance. The primary argument is that skin color is used by venal politicians as a kind of Trojan Horse to attract African-American support for policies inimical to their interests.

Much of this discussion was prompted by the Democratic primary. Sanders’ focus on economic inequality rather than anti-racism failed to attract significant Black support—always best mobilized by direct racial appeals. Clinton owes her popularity in the Black community in large part to her husband’s cultural gestures and her expressions of concern for issues important to African Americans.

In Black Agenda Report, an online journal notoriously hostile to this type of identity politics, Solomon Comissiong argues, “Far too many black folks will vote for their worst enemy, if he or she looks like them. That’s why identity politics, which masquerades as a black power strategy, winds up disempowering African Americans every election.”

These are important issues to ponder as the Black community attempts to come to grips with the looming Trump administration. No question, we need to build a broad, inclusive movement of people opposed to the manifold threats Trump poses. Movements have thrived best in American history when they’ve been coupled with the struggle for racial equity—from the abolitionist movement of antebellum America, to the populist movement of the 1890s, to the counterculture movement of the 1960s-70s. Racial justice movements have energized the liberation struggles of other groups oppressed by white supremacist capitalism—including white workers. This is likely because interracial unity subverts the divide-and-conquer tactics deployed to stunt progressive challenges.

One major threat to this unity is the identitarian core of Donald Trump’s support base. The president-elect represents a return to “whiteness” for some. This explains his appeal to the white nationalists of the “alt-right,” who bemoan the lack of white racial esteem. This nation’s slavery-tainted history presents us with an asymmetrical reality: All identity politics are not the same.