books Why Inequality Matters and What We Can Do About It

Michael Yates has produced a primer on inequality for our times. Steve Early takes a look. 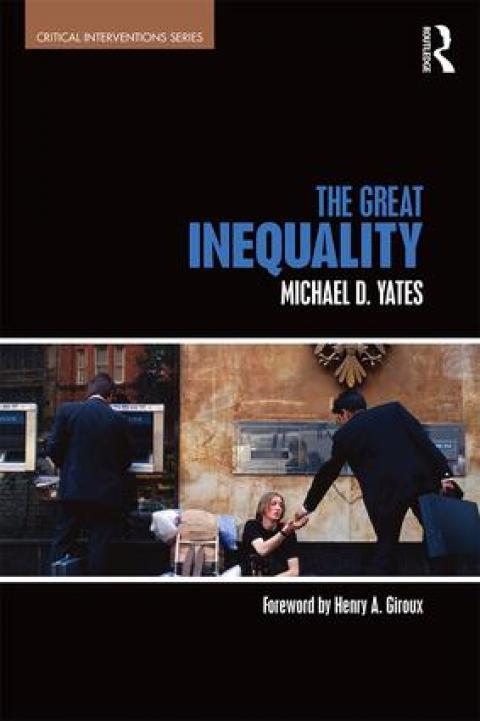 Radical economist and Monthly Review associate editor Michael Yates grew up in a western Pennsylvania manufacturing town. He spent more than three decades working as a college professor. Yet, despite his own academic career, Yates never lost touch with the life experience of high school classmates, friends, neighbors, and relatives who toiled in blue collar jobs.

That background has always informed his work as one of the nation’s leading labor educators. Yates has played that role both in the classroom and as the author of previous books like Why Unions Matter. Originally published by Monthly Review Press in 1998, Why Unions Matter has become a multi-edition bestseller in labor circles. Tens of thousands of copies have been used in working class studies programs, union leadership courses, and shop steward training, giving Yates a far greater union member audience than most campus-based experts on labor issues and trends.

Yates’ newest book, The Great Inequality (Routledge, 2016), might have been titled “why inequality matters” since it describes the social and economic conditions, steadily worsening in the U.S., that unions are supposed to ameliorate. Why Unions Matter was both a guide to the basic structure, functioning, and history of American labor, and a critique of the ways in which union agitation, education, and organization has fallen short. The many societal and workplace manifestations of union weakness and decline are further documented and indicted in The Great Inequality.

As Yates sees it, the first step toward reducing inequality “is to grasp its magnitude.” Much of his new book usefully distills data on recent trends in income distribution and wealth accumulation and related unequal access to jobs, housing, health care, education, and retirement security. He also devotes particular attention to the resulting impact on people of color, in areas ranging from infant mortality and life expectancy rates to unemployment and disproportionate involvement in the criminal justice system and “prison-industrial complex.”

Using clear and convincing examples, Yates demonstrates how capitalist economies work to perpetuate many of these problems, across generations. He rebuts the claims of mainstream economists that “markets are the cure for whatever ills we face” and shows how “inequality has its roots in unequal power.” Just as he did in his 2009 essay collection, In and Out of the Working, Yates also weaves his own personal and social movement experiences into the narrative.

In a painful account of his past service with the United Farm Workers (UFW), for example, the author describes how that union “crashed and burned, in part because of employer violence and government hostility, but also because of internal failures.” Summoning up “the ghosts of Karl Marx and Edward Abbey,” a much-admired author and activist who inspired “a generation of militant environmentalists,” Yates argues for a “radical politics of the future that makes inequality and environmental destruction its centerpiece.”

The Great Inequality is classic Yates. It combines a critique of national and global economic trends that’s highly readable and accessible for non-experts, with a call to action by the latter. He encourages labor and community activists to raise, not lower, their sights in a period of daunting political challenges. The book makes a valuable contribution to the public debate about wealth and income disparity that was briefly elevated by Senator Bernie Sanders during his presidential primary campaign challenge to Hillary Clinton last year.

After Sanders’ defeat, of course, the ensuing general election exchanges between Clinton and Donald Trump were far less illuminating on these and other topics. And now, with Trump about to enter the White House, grassroots movement building to counter the weight of what Sanders called “the billionaire class” is a higher priority than ever. Without an increase in working class power, exercised through unions and other forms of organization, Yates predicts that those “who must work for wages to live” will continue to lose ground.

“Isn’t it time,” he asks his readers, “for us to become protagonists, go on the offensive, attack our enemies head on, study and learn from both successes and failures, always look for how things are connected, and see what happens. We don’t have that much to lose.”

Trump regime resisters in search of relevant reading material need look no further than The Great Inequality. The corporate dominated politics, culture, and economy that spawned our president-elect are brilliantly dissected there.