We need a socialist politics that challenges the Democratic Party's leadership, not just the Right. 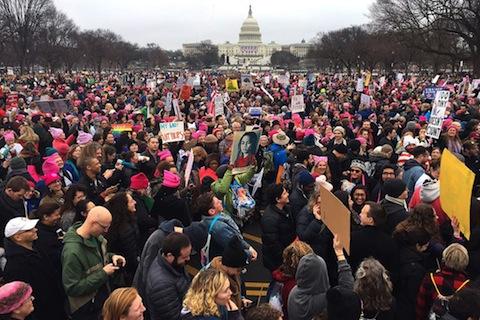 The Women's March on Washington on January 21, 2017., ResistFromDay1 / Flickr

Among this audience, there is little reason to recite the litany of Trump’s crimes, what his administration means, and how dire the situation is. It’s very, very bad. It’s our duty and mission to defeat the Right and build a majority around a different set of politics.

In order to figure out how best to do that, it’s worth keeping a few things in mind. First, Trump doesn’t have a mandate. That’s not to say that he isn’t dangerous — he has power. But that does mean that the political situation is very much up in the air.

There are huge opportunities for left advance, and we should be wary of thinking that we need to save the liberal center before we create the conditions for us to build a socialist left alternative. That doesn’t mean that we should throw out the best aspects of liberalism, or vulgarize our politics into a crude populism. But it’s key that even though the people in charge of the bourgeois state at any moment (then Obama, now Trump) are our main enemies, much of our political activity should be challenging (broadly conceived) the political center. By this, I don’t mean individual liberals, but the centrist leadership of the Democratic Party at every layer, and the caste leading liberal reform groups in this country.

Many of us thought that their combined efforts would be enough to defeat Trump — even though we know that it in the long run they would struggle to challenge Trumpism. It turns out that we were wrong: they could do neither. And while they are weak and on their heels, we need to make sure they’re dislodged as much as possible from political leadership to prevent this from happening again.

They’ll blame Russia, they’ll blame the racism and sexism of white workers, they’ll blame Jill Stein, they’ll blame whomever. We have to say “no” and say clearly that Hillary Clinton, Joe Biden, Barack Obama, and the rest of the adherents to Third Way, centrist liberal politics are responsible for Donald Trump.

If we don’t make ground against the center then we’ll be doomed to the continued rise of the populist right. We’ll see the polarization of our politics increasingly between drawn between a respectable center — one committed to the marriage of social inclusion with neoliberal economics, a free press, supporting the CIA, and whatever else — and a somewhat erratic populist and seemingly “anti-establishment” right.

Trump doesn’t have a mandate now, but Trumpism may develop one in the future. We should be very afraid when Sean McGarvey, the president of the Building Trades Unions umbrella group, calls the meeting he had with Trump on Monday the best of his life. This is a moment when we should be leaning on the labor movement — one of the last bastions of working-class politics in this country — but instead we have key sectors of it potentially building support and legitimacy for Trump. But our conclusion then shouldn’t be to rally behind just any sort of anti-Trump politics, but rather to redouble our efforts to support rank-and-file struggle against a union bureaucracy that will sell out the entire working class for even the smallest of concessions.

The movement and mobilization against Trump so far has been impressive. It absolutely must be a broad resistance. We need to win over individual liberals and we need to create a broader climate where liberal organizations at least rhetorically move left.

But unless we, within this broad front, offer up a consistent and foregrounded critique of the dominant policies of the Democratic mainstream and their allies, unless we inject that ideology into the movement, we’re going to see a political rehabilitation of Clintonism.

We need to be clear that only a movement led and inspired from the left can challenge Trump — otherwise we’re just going to elect a bunch of Democrats in 2018 and resurrect the worst experiences of the 2000s antiwar movement.

Bernie Sanders and the movement still around him in various forms is key to this effort.

For years, many of us have posed a divide in the Democratic Party that seemingly existed only notionally: a gap between social-democratic demands at the base of the party and technocratic neoliberalism at the top of it. The Sanders campaign made that divide more real and tangible: it stirred a rabid opposition to Clinton and Clintonism among millions of people, many of them politicized for the first time. And more importantly, it presented an alternative politics.

I have no interests in using the limited time and resources of socialists in doing things like supporting Keith Ellison for DNC chair, and I don’t think that the Democratic Party can be transformed into an effective vehicle of working-class politics. But I do believe that Sanders and others are engaged in a process that, at its best, creatively produces divisions and polarizations within the party that complement the activity that we’re doing outside of it.

We have to judge the actions of Sanders Democrats concretely, not snipe at them from afar or say that they’re wasting their time. I have no doubt that these forces will stand with us in social movements, in electoral efforts, in workplace actions.

The broad sketches of our politics in the Trump era are emerging. Socialists will continue to do their part building and working to be the leaders of social movements organized around social-democratic demands — not encouraging people to follow the lead of liberals and settle for “winnable” half measures, but intransigently fighting for what we want — to expand the base for our politics, while using elections as vehicles to communicate our ideas to millions.

Both of these things will put us into direct conflict with centrist politics. That’s exactly what we want.

At the moment, we can’t build a party. Seth Ackerman’s recent Jacobin piece offers an important account of the structural problems that would confront us in such an effort. Where practical, we should run as independents. But in certain circumstances, running in Democratic primaries makes sense.

What’s key is that these candidates run as open and committed socialists, with a clear and explicit platform, with their own network of funding and support that can hold them accountable. This is not about capturing the Democratic machine, it’s about having the tactical flexibility to use whatever tools possible to engage in class politics.

Our immediate step must be to continue building the majoritarian left alternative we saw emerge with the Sanders campaign, while pushing polarization and conflict — against Chuck Schumer (who should have to deal with protests when he tries to show up at anti-Trump rallies), against Hillary Clinton, against Cory Booker, against all of them — while also shielding against the reactionary policies of Trumpism.

Adapted from remarks at “Building a Socialist Left Under Trump,” hosted by Solidarity, the Democratic Socialists of America NYC, and the International Socialist Organization.