How the Global Gag Rule Will Hurt Women and Families, Explained by 2 Experts on the Ground

Trump’s expansion of the gag rule won’t reduce abortion. But it will stop poor women from getting birth control, and kill programs that help war-torn communities. 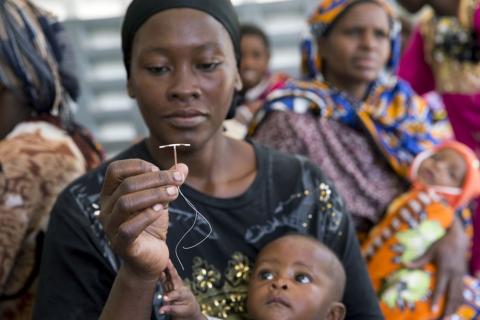 Supporters of the so-called global gag rule, a Reagan-era policy that President Trump reinstated and massively expanded this week, often claim that it prevents US taxpayer dollars from funding abortion overseas.

But that’s not what the gag rule does at all. Another law, the Helms Amendment, already blocks US funding from covering abortion. The gag rule, on the other hand, punishes a foreign family planning organization for using its own money to provide, or even discuss, abortion services if it also receives money from the federal government. If the US has been funding other health care projects at that organization, like contraception delivery services, those funds go away.

Millions of poor women will lose birth control access, and thousands will die from unsafe abortion

Under previous Republican administrations, the gag rule only applied to family planning funding. That was bad enough, since many of the organizations that lost funding were also major providers of birth control. Less birth control meant more unintended pregnancies, which meant higher abortion rates — including often deadly unsafe abortions in areas where abortion was illegal.

Under Trump, however, about 15 times more funding will be impacted by the gag rule. That will affect not just contraception access and abortion rates but also maternal health care, HIV/AIDS testing and treatment, and Zika virus prevention and treatment. Millions of poor women will lose birth control access, and thousands will die from unsafe abortion or from avoidable pregnancy complications.

Vox spoke separately with two overseas health care providers about the situation on the ground in their countries: Lalaina Razafinirinasoa, country director of Marie Stopes Madagascar, and Marta Royo, executive director of the Profamilia network of family planning clinics in Colombia.

“We estimate that the cost will be very high, not only on the health system but also for the broader economy”

Abortion is legal in Colombia and illegal in Madagascar, but the gag rule will be a blow to family planning services in both countries. Both the International Planned Parenthood Federation, of which Profamilia is a member associate, and Marie Stopes International, of which Marie Stopes Madagascar is a part, are large international family planning organizations that have said they will not agree to the conditions of the gag rule, because safe abortion is an important part of women’s health care that they cannot simply stop offering worldwide.

The following contains excerpts of those two conversations, which have been edited for length and clarity.

What is the scope of your services?

Lalaina Razafinirinasoa, country director of Marie Stopes Madagascar: We provide family planning services to approximately 800,000 women and men. We are the largest provider of family planning in Madagascar. Approximately 38 percent of women using modern contraceptive methods are getting them from our team members.

I lead a team of around 484 people who are working across all the country of Madagascar.

We have five types of services, including a mobile clinic that serves 22 regions in Madagascar, particularly the people living in remote and hard-to-reach areas.

“US funding helps the most vulnerable people in the poorest areas”

The funding we get from USAID [United States Agency for International Development] is especially targeted to some of the most vulnerable populations in the poorest areas.

What are the challenges of accessing family planning in your country?

Razafinirinasoa: Our country is very young. About 64 percent of the population is under 25. Uncontrolled birth can cause the worst poverty.

We are in a restricted environment, where abortion is illegal. We are providing only family planning services.

The mobile clinics provide the whole range of family planning methods — short term, long term — but particularly permanent methods [like IUDs and implants], which are the most practical methods for people living in hard-to-reach areas, because it takes them, like, two hours to get to our supply point.

“In many small towns and communities, you don’t even have a doctor or health center”

Sometimes [mobile clinic workers] use existing means of transportation, like boat or train, to get to a site to deliver family planning services.

Royo: Colombia has a lot of problems with access to family planning products and services, especially for poor women. Fifty percent of pregnancies are unwanted in Colombia, and 19 percent of adolescents [15 to 19 years old] are pregnant.

In some places we’re working right now, through the projects [US] donors are financing, as high as 35 percent of adolescents are pregnant or have been pregnant.

Colombia is a country with huge contrasts and contradictions. You have very big cities that are developed and sophisticated and rich, and you have the poorest places not very far away. Even though we rank very well in many statistics, this is a country that is still struggling very hard with inequality.

For example, the health system is supposed to cover 98 percent of the population. But in reality, in many small towns and communities or municipalities, you don’t even have a doctor or health center that can provide access to women, even for the most basic needs — not only in terms of health, but public services like access to water.

Abortion has been legal in Colombia since 2006. But most of the population has no idea that abortion is not illegal, that there are legal clinics where they can have access to it. They don't even know that the health system of Colombia is supposed to pay for it when a woman wants to have an abortion.

Women say the stigma is really hard for them, even with organizations like Profamilia. There are so many [social] restrictions when you want to speak about it. We have our own gag rule, in its own way. [That’s why there are still] so many illegal abortions in Colombia, about 400,000 per year, because it's very hard to speak about it.

We work in some schools. It’s great because you see immediately how adolescent pregnancy numbers go down when we have the opportunity to work with them. You see the impact right away. [But] there are very few schools today in Colombia that [offer sex education], because schools still say it is the responsibility of parents.

We want to promote sexual and reproductive rights education. We want to promote family planning, and making sure young people have access to products, services, correct information, and education. That’s the only way you can really fight unwanted pregnancy and abortion.

How will the gag rule affect your work, and the people of your country?

Razafinirinasoa: In other countries where abortion is legal, Marie Stopes is providing abortion services. So the gag rule is affecting us the same, because we are part of this global partnership. Because the mission of this global partnership is to give women the right to have children by choice, not by chance. We are aligned with this vision, even if we are working in a different context [by providing birth control, not abortion, in Madagascar].

“We want to promote family planning, and making sure young people have access to education”

[Half of our service delivery methods are] funded by USAID — the mobile clinic working in outreach areas, as well as the social franchise, which includes a voucher program for young people and poor women, will be affected. For sure the voucher program will be lost, [which helps] around 35,000 people a year. And the entire 22-region mobile outreach corresponds to half of the beneficiaries that I mentioned — around 400,000 people a year.

As I said, we are the biggest provider of family planning in Madagascar, so it will affect the whole country’s service provision. And as I mentioned, we are also the only organization providing permanent [contraceptive] methods.

We estimate that the cost will be very high, not only on the health system but also for the broader economy of Madagascar.

Just in 2016, we helped avoid approximately 165,000 unwanted births. By 2020, [if we kept our funding, we would have prevented] 1 million unintended pregnancies, more than 2,000 maternal deaths, and approximately 340,000 abortions. And we estimate the savings to the Madagascan government would be around £39.2 million in direct healthcare costs over that period.

But now all of this will be not achieved due to this new policy, this new executive order.

Because we are such a young country, you can see the demographic increase in the next few years could be chaotic for the economy. We will not have enough resources to distribute for health care and other issues. Even for the climate — we are having a big problem of climate change in Madagascar.

“It is very sad. I thought, how are we going to turn all these women away?”

It is very sad. I mean, when I heard about this, the result of the election, I thought, how are we going to turn all these women away? How are we going to deny them, again, the access to family planning and birth control they used to get from our organization?

We are known across the country for providing family planning. So now [if women] come into our door, we might have to say no, we don't have the method. So this is the main painful picture that I'm having for the next few years if we don't have alternative funding.

Royo: Profamilia will not disappear because of this, but we won't be able to cover those communities that are in great need.

We have been working with very poor populations on the coast for two years. We were starting a project this year with USAID in 10 municipalities that were prioritized because they have been marginalized for many years. The duration of the project is two years; the direct impact will be on 11,400 victims, and indirect impact 99,000 inhabitants.

“We don't know what's going to happen. It's a total setback for the country.”

They have suffered especially the effects of war and internal conflict for many years. They don't have their basic needs covered — public services, access to water, access to health services.

[The program teaches recipients] how to build strength in communities, in terms of everything — education, sexual and reproductive rights, gender-based violence, how to be a citizen in society. To empower them, to give them these opportunities, the possibility of dreaming with an education and doing something else with their lives. And to develop strategies for the prevention of vector-borne diseases, with emphasis on Zika.

This community of young people — since they don't have access to education, the only possibility they have is going to work with the drug dealers, and so it's a wonderful project.

We don't know what's going to happen. [Losing funding for this program due to the gag rule] would devastate [our ability to] continue that work. It's a total setback for the country.