Hundreds Rally for Science at Demonstration Near AAAS Meeting

The last few weeks of activism have been a sign that “scientists have woken up and are ready to fight back." 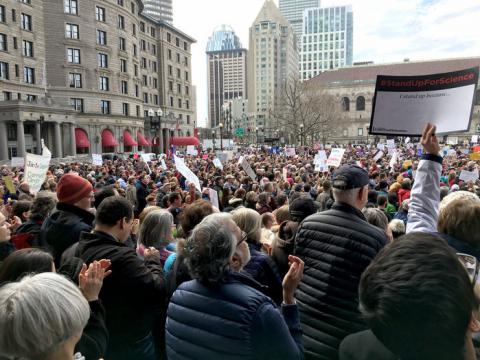 Boston’s Copley Square fills with people during the Rally to Stand Up for Science.,Sarah McQuate
BOSTON--Hundreds of science supporters gathered here in Copley Square this afternoon at a rally coinciding with the annual meeting of AAAS, which publishes Science. Ralliers chose the meeting—the first major gathering of scientists since Trump took office—as an opportune moment to demonstrate that the science community plans to fight recent policies that many see as dangerous to the role of science in society.
“We scientists want to send a message to Mr. Trump, and that’s that America runs on science,” Geoffrey Supran, a postdoctoral fellow studying energy modeling at MIT and science history at Harvard, tells Science. “Neither scientists nor citizens are going to stand idly by while the administration peddles anti-science rhetoric and alternative facts.”
The Rally to Stand Up for Science, which was supported by over a dozen science activism groups, is not the first of its kind, and it won’t be the last. Concerned scientists organized a similar event at the December American Geophysical Union conference in San Francisco, shortly after President Trump was elected. And science supporters in the hundreds of thousands have pledged to march in cities around the globe on Earth Day (22 April). 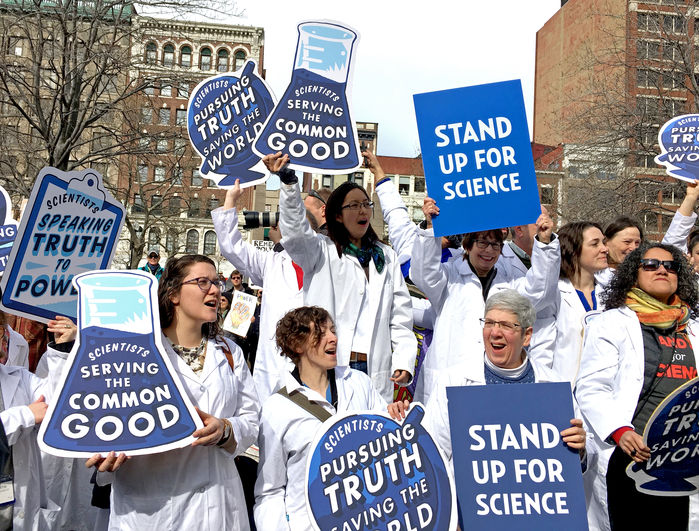 While AAAS itself was not involved in the rally, many conference attendees headed to Copley Square for the demonstration. And in many ways the tone of the rally seemed to parallel the atmosphere within conference center walls, where this year’s meeting theme was “serving society through science policy.” Session titles included “Defending Science and Scientific Integrity in the Age of Trump” and “Science Policy in Transition: What to Expect in 2017 and Beyond.” Attendees jumped at the opportunity to ask major science policy leaders, like John Holdren, the former Science Adviser to Barack Obama, how they could help influence policy under the new administration.

“The energy of this year’s meeting feels different,” says former State Department Science Adviser, Frances Colón. “Some people sound excited, some concerned, some even enraged, and they all want to get engaged.”
Not all meeting attendees were on the same page, though. During a session on science policy, former congressman Bart Gordon (D-Tenn.) echoed worries expressed by some science community members that the march could be “dangerous,” by painting science as just another interest group. But Boston rally speakers contested that view, arguing that they are fighting to protect the public more than their own interests.
“If I lose my university job, I have enough transferable skills in communication and data analysis that I could find some other work,” says rally speaker Jacquelyn Gill, a paleoecologist studying climate change at the University of Maine, who is also involved in planning the March for Science. “It’s not myself that I'm worried about, it’s the outcomes of my research for the stakeholders—who are the American public.”
Harvard historian of science and popular author, Naomi Oreskes, expressed a similar sentiment to ralliers at Copley Square. “We don’t want to be here. We want to be doing science,” she said. “But we can no longer sit on the sidelines assuming someone else well do the work of protecting the integrity of science.” 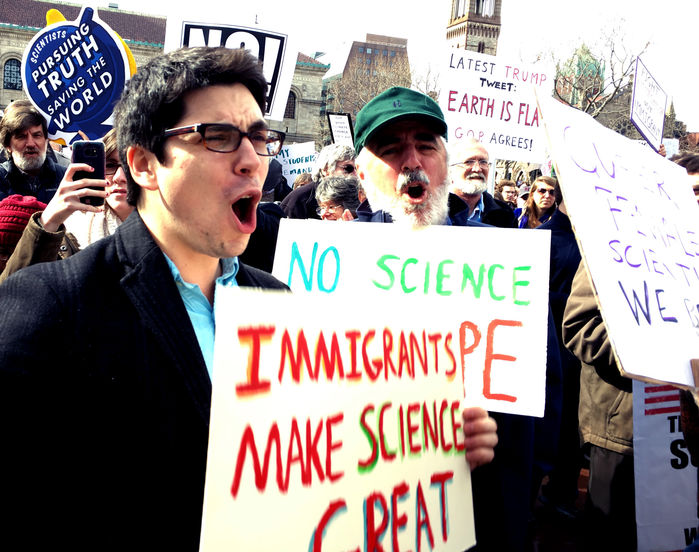 “Science is not silent,” was one of the cries that rang out through Boston’s Copley Square during the Rally to Stand Up for Science.  Sarah McQuate
And not all ralliers were from the scientific community. Holding a sign reading, “Living proof that you can [love] God and science,” Cambridge, Mass. minister Kate Layzer says she came out because she believes “we need science to save the world.” Greg Savage, an Acton, Mass. resident who works in finance says he came out with his wife, Nancy, because “it scares us that science is being ignored.” A botanical artist, she added that the couple thinks “it’s great for scientists to speak out.”
It’s not the first time in history scientists have spoken out, noted Supran, arguing that the tradition of scientists speaking “truth to power” dates back to the days when Galileo was persecuted by the Roman Catholic Church for insisting that the earth revolved around the sun. The last few weeks of activism have been a sign that “scientists have woken up,” he said, and are ready to fight back.