Resistance to the Dakota Access Pipeline and other extractive projects was a recurring theme in the NWIF festival, which highlights motion pictures by and about indigenous females. 'Standing Rock: A New Nation' encapsulates what the movement there is all about and kicked off the NWIF’s screenings. New Nation explores the heightened consciousness created by the radicalized village that sprang up to resist DAPL and the extraction industries that threaten Mother Earth. 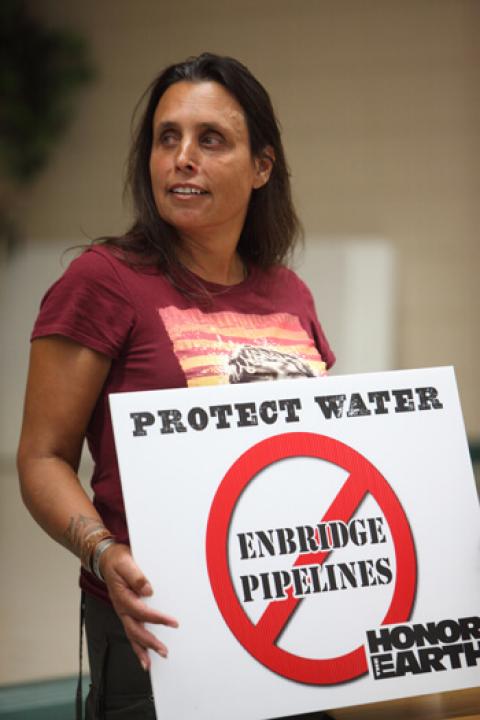 Winona LaDuke at an informational meeting about the Enbridge pipelines Sandpiper and Line 3. , (Photo: Keri Pickett)

Resistance to the Dakota Access Pipeline and other similar extractive projects was a recurring theme in the NWIF festival, which was founded by Joanelle Romero and highlights motion pictures by and about indigenous females. Texan Daniela Riojas’ Standing Rock: A New Nation is a short that encapsulates what the movement there is all about and kicked off the NWIF’s screenings. New Nationexplores the heightened consciousness created by the radicalized village that sprang up in North Dakota to resist DAPL and the extraction industries that threaten Mother Earth. Riojas describes this ad hoc city-state that mushroomed in defiance of the pipeline and N.D. Gov. Jack Dalrymple’s Dec. 5, 2016 evacuation order as “a Mecca for activists.”

Shortly after Riojas’ short opens – with the ubiquitous LaDuke likening North Dakota to “Mississippi, the deep north… where you put people in dog kennels” – sweeping, soaring, striking aerial shots of the Oceti Sakowin Camp Cannonball at the Standing Rock Indian Reservation reveal a sprawling, wintry encampment of teepees, tents, trailers, prefab type housing and vehicles beside a frozen river, where “thousands of veterans and supporters from all over the world have poured into.” Along with other anti-DAPL camps, they have generated “a birthplace for new ideas on how to transform our global and local communities.”

Wearing a feather headdress and stressing the importance of treaty rights, Lakota tribesman Isidore Zephier explains the essence of the cause: “It comes down to one thing: everybody drinks water,” which the water protectors fear could be polluted by pipeline spills into the Missouri River. Dreadlocked organizer Free Will states that thousands have gathered, heeding the Lakota Nation’s call to stand firm because “There’s no reason to go down the fossil fuel road anymore and endangering our water,” and went on to advocate alternative energy. Will called Standing Rock “an epicenter of training, of how to resist.”

William Michael Day, of Iraq Veterans Against the War, said former armed forces personnel – who were previously “deployed… to fight in the interests of pipelines” overseas – are “flip[ping] the script” at Standing Rock “to help protect against the multi-billion dollar corporations that are raping and pillaging the land… The military industrial complex is an evil thing that keeps people in poverty.”

Day added that the movement at Standing Rock is moving towards “a new paradigm.” This theme was also stressed by Savannah Thunder in Choctaw/Seminole director Tracy Rector’s Portraits From Standing Rock, a 35-minute short consisting of interviews largely shot in black and white and close up. Thunder, a young indigenous woman who lived at the people’s republic of Standing Rock for four months, eloquently spoke about the new awareness spawned by the occupation and opposition: “Everyone is loving, welcoming. They make you feel like a giant. The young people are fearless. They have restored pride in our people,” who were subjected to 500 years of conquest and genocide since Columbus’ uninvited intrusion in the Western Hemisphere.

Actress/activist Jane Fonda, a longtime campaigner for Native rights since at least 1969’s American Indian takeover of Alcatraz, commented on “so many tribes uniting” and “much loving gratitude and determination” at Standing Rock. Like Riojas’ short these interviews emphasize how the act of resistance galvanizes participants’ inner psyches, generating a higher, more evolved awareness of solidarity as what Dr. King called “the beloved community” takes shape in embryonic form. As Rosa Luxemburg wrote in her pamphlet inspired by the 1905 Russian Revolution, The Mass Strike: “in the storm of the revolutionary period even the proletarian is transformed from a provident paterfamilias [male head of household]… into a ‘revolutionary romanticist,’ for whom even the highest good, life itself, to say nothing of material well-being, possesses but little in comparison with the ideals of the struggle.”

Also interviewed in Portraits From Standing Rock is attorney Holly Bird of the Water Protectors Legal Collective, who describes the struggle from the perspective of law and rights (Thunder also describes the brutal “bad conditions” inflicted on those arrested “to try to make you feel like you’re not human”). Activists Lee Ann Eastman and Brandee Paisano are also interviewed in black and white.

In End of the Line: The Women of Standing Rock, Emmy Award-winning director Shannon Kring, who specializes in indigenous issues, takes another look at the anti-DAPL struggle from a female point of view. She appeared at NWIF with executive producer buckskin jacket-clad Pearl Means, who told the audience her late husband, prominent Oglala Lakota activist Russell Means, told her before his death in 2012: “The hope lies with the women.” Russell joined the American Indian Movement in 1968, participated in the Alcatraz occupation, the Wounded Knee events of the early 1970s and also acted in many Hollywood TV/movie productions, including the 1990s films The Last of the Mohicans, Pocahontas, Song of Hiawatha and Oliver Stone’s Natural Born Killers.

Although she appears only briefly in Standing Rock: A New Nation, Winona LaDuke – that Tom Joad of the Native movement, who is “all around in the dark” – is the subject of the biopic First Daughter and the Black Snake. Director Keri Pickett calls the 104-minute documentary “the prequel to Standing Rock”, because due to LaDuke’s opposition to a proposed pipeline near her Minnesota home, “Following the competition of the fourth annual ride against the current of oil, [the energy corporation] Enbridge announces the cancellation of the Sandpiper pipeline, investing in the Dakota Access Pipeline instead.” Irene Bedard, who gave voice to Pocahontas in Disney’s 1995 animated feature and co-starred in Smoke Signals, appears in Black Snake, discussing treaties.

Joanelle Romero’s provocative American Holocaust: When It’s All Over I’ll Still Be Indian draws parallels between the genocide of America’s indigenous peoples and the Nazis’ mass extermination of 6 million Jews. Her 30 minute 2000 documentary contends that Hitler drew inspiration from Washington’s ethnic cleansing of tribal people, quoting the slogan attributed to General Philip Sheridan: “The only good Indian is a dead Indian.” The film raises the questions as to what descendants of those who inhabited the continent before Columbus should rightfully be called – one Native speaker objects to being dubbed an “American” as offensive, preferring to be known as an “aborigine.”

According to Romero, the disturbing, powerful American Holocaust is the only work by an indigenous filmmaker to have been shortlisted for an Academy Award. Narrated by Jewish actor/activist Ed Asner, it’s interesting that like LaDuke, Romero is part-Jewish, as well as part indigenous, giving both women a double whammy in terms of being descended from two peoples who were earmarked for extinction – but survived.

[L.A.-based critic and film historian Ed Rampell is the presenter and programmer of “10 Films That Shook the World”, a monthly cinematic centennial celebration of the Russian Revolution taking place through Nov. 7 at the Los Angeles Workers Center.]