Based on research during and immediately following World War 2, this pathbreaking book analyzed the proclivities individuals might have toward support for authoritarian regimes, stressing preconceived attitudes on race, class, sexuality and nationalism, concluding that fascism’s attraction came not (or not just) from political agreement but from a personality structured by larger, repressive social forces in which sociological influences upon ideology are mediated. 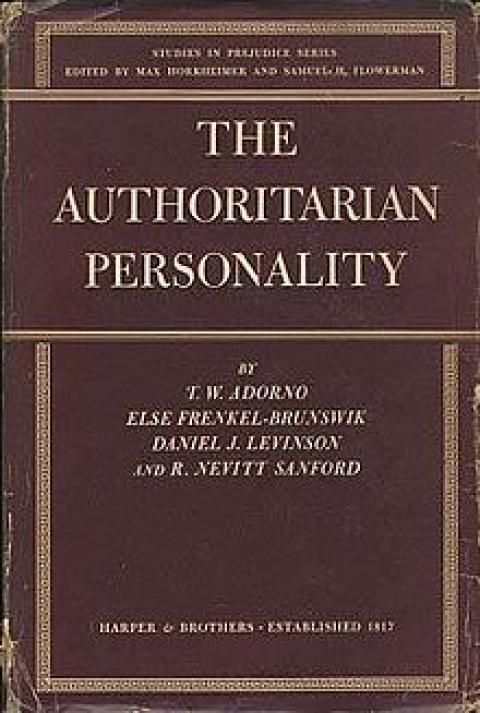 Cover of original edition,
The Authoritarian Personality
By Theodor Adorno et. al.
Norton, 1982, 1993
(Out of print but available from multiple online sellers. libraries.)
In the early post-World War II years, antifascism’s most intricate, intersectional analysis of the political right came from a highly influential work within the academic social sciences: The Authoritarian Personality (1950, reissued 1982), by Theodor Adorno and University of California-Berkeley psychologists Else Frenkel-Brunswik, Daniel Levinson and Nevitt Sanford. [For background on Adorno’s life and work, see the essay in “The Internet Encyclopedia of Philosophy,”  — ed.]
The book is most remembered for its development of an “F Scale,” a quantifiable measure of an individual’s susceptibility to fascism, gleaned from survey questions and interviews. According to Adorno et al, if you strongly agreed with the following statements, you might not be a fascist right now, but you would be the kind of person who would probably fall for a fascist demagogue when one came calling:
• There is too much emphasis in college on intellectual and theoretical topics, not enough emphasis on practical matters and on the homely virtues of living.
• Homosexuality is a particularly rotten form of delinquency and ought to be severely punished.
• Human nature being what it is, there will always be war and conflict.
• There are some things too intimate or personal to talk about even with one’s closest friends.
• There are some activities so flagrantly un-American that, when responsible officials won’t take the proper steps, the wide-awake citizen should take the law into his own hands.
• No insult to our honor should ever go unpunished.
• Every person should have a deep faith in some supernatural force higher than himself to which he gives total allegiance and whose decisions he does not question.
• Too many people today are living in an unnatural, soft way; we should return to the fundamentals, to a more red-blooded, active way of life.(1)
What Adorno, Frenkel-Brunswik, Levinson and Sanford were looking for in such questions was not a conscious, well-formulated fascist politics among their interview subjects. Rather, they were trying to pinpoint an underlying set of pre-political personality traits that formed the wellsprings of fascist support.
The authors identified the core of the “authoritarian personality” — the thing they tried to draw out through their surveys — with the following main features: conventionalism (“rigid adherence to middle class values”); authoritarian submission (“uncritical attitude toward idealized moral authorities of the ingroup”); authoritarian aggression (a desire to punish those who transgress conventional values); anti-intraception (a rejection of imaginative, reflective, or empathetic people); superstition and stereotypy (“the belief in mystical determinates of the individual’s fate; the disposition to think in rigid categories”); power and toughness (“preoccupation with the dominance-submission, strong-weak, leader-follower dimension”); projectivity (“the disposition to believe that wild and dangerous things go on in the world”), and sex (“exaggerated concern with sexual ‘goings-on’”).(2)
A few of the traits on their list may seem dated in the 21st century — for instance, the “exaggerated concern with sexual goings-on” may no longer apply following the transformation of Western cultures by consumerism, feminism, and the LGBTQ movements. Be that as it may, it is precisely the hunt for an underlying fascist personality that makes this book so valuable at the present conjuncture.
Fascism Alive and Well?
I have argued elsewhere that Donald Trump puts forth an essentially fascist rhetoric and appeals to fascist sensibilities, but he doesn’t command a fascist party, and it’s unclear whether he needs a fascist state to achieve his goals.
From what we have learned from Tony Schwartz — ghost writer of Art of the Deal — Trump simply doesn’t read.(3) With no functional knowledge of history to draw upon, his rediscovery of fascist rhetoric rather derives from his particular personality structure, and it appeals to others with the same. The United States may or may not develop a fascist regime after January 20, 2017, but having its institutions under the command of someone with this personality represents an unprecedented danger.
Like most postwar, left and liberal antifascist studies, The Authoritarian Personality assumed that the threat of fascism did not die in 1945, but remained a latent potential in all Western societies. The book appeared at a moment of great anxiety for the American left.
In the early 1950s, what people to the left read as “fascism” in the rise of Joseph McCarthy and the House Committee on Un-American Activities (HUAC) was an onslaught of xenophobia, conspiracy rhetoric and racism along with a very real erosion of civil liberties in the name of anticommunism.
Many leftists and even some liberals read this repression in the context of a larger, postwar social transformation that bore uncanny similarities to the very regimes they fought against in World War II: the permanent militarization of society necessitated by the Cold War; a growing anti-intellectualism, cultural homogenization and conformity; a violent, racial reaction against the nascent civil rights movement; and perhaps most dramatically, the rehabilitation of Germany, Spain and Japan as “bulwarks against communism” coupled with a disturbing silence about their recent victims (notably the millions murdered in the Nazi holocaust).
A rebuke to Cold War anticommunism, The Authoritarian Personality argued that fascism was the gravest danger facing the United States. Its contributors originally wanted to call the book The Potential Fascist or The Fascist Character, but they saw these titles as far too risky in the Cold War context, where harping too much on “fascism” opened you up to charges of communism.(4)
The book was part of the Studies in Prejudice Series, sponsored by the American Jewish Committee and edited by Max Horkheimer and Samuel Flowerman. Its release occurred shortly after Horkheimer and Adorno returned to West Germany to reestablish the Institute of Social Research in Frankfurt.(5) 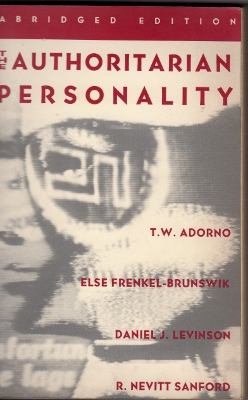