Trump, Syria, and Chemical Weapons: What We Know, What We Don't, and the Dangers Ahead; Trump Launches Attack on Syria

Donald Trump just ordered the launch of dozens of Tomahawk missiles to strike Syria. It's an illegal and unauthorized escalation that could have devastating consequences, killing innocent Syrians and U.S. service members. Escalation against Syria will not help the victims of this heinous chemical attack, it will not bring the devastating war in Syria to a quicker end, it will not bring back the dead children. It will not defeat ISIS or end terrorism. 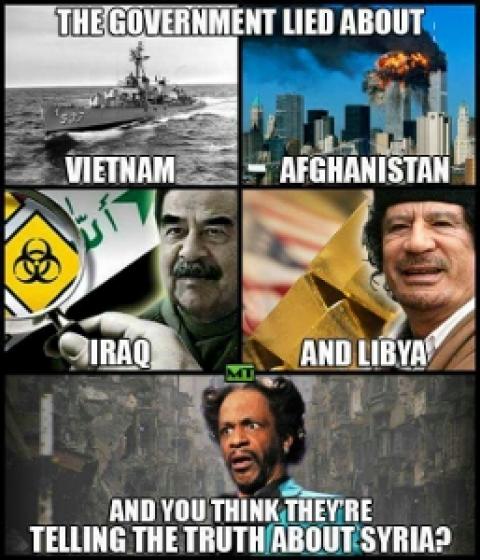 ,
Trump, Syria, and Chemical Weapons: What We Know, What We Don't, and the Dangers Ahead
By Phyllis Bennis
April 6, 2017
Common Dreams

Let's start with what we don't know. Experts remain uncertain what chemical(s) were involved in the horrific chemical attack, almost certainly from the air, on the village of Khan Sheikhun in Idlib province in Syria.  The nerve agent sarin, chlorine, and unknown combinations of chemicals have all been identified as possible, but in the first 48 hours nothing has been confirmed. We don't know for sure yet what it was that killed more than 75 people, many of them children, and injured many more.

Crucially, we also don't know who was responsible. Western governments, led by the United States, and much of the western press have asserted that the Syrian regime is responsible, but there is still no clear evidence. Certainly Damascus has an air force, has been known to use chemical, particularly chlorine, weapons in 2014 and 2015. So that's certainly possible.

"A US military escalation against Syria (because we must not forget that US Special Forces and US bombers are already fighting there) will not help the victims of this heinous chemical attack, it will not bring the devastating war in Syria to a quicker end, it will not bring back the dead children."

The Syrian military denies using chemical weapons.  Their international backer, Russia, claims that the Syrian military did drop bombs in the affected area but that the chemical effect was not in the bombs dropped but rather from the explosion of an alleged chemical warehouse under the control of unnamed rebel forces. The same report by the United Nations and the Organization for the Prohibition of Chemical Weapons that found Syrian government responsibility for chlorine attacks also found that ISIS had used another chemical weapon, mustard gas, and investigated at least three other chemical weapons attacks whose perpetrators could not be identified.  So that could be possible as well.

For a variety of reasons, some of these possibilities don't hold up so well if the chemical used this week was the sarin nerve agent -- but we don't know yet what it was.

There are some other, perhaps even more important things, that we do know. We know that in 2013, at the time of an earlier, even more deadly chemical weapon attack, similar accusations against the Syrian regime were widely made, assumed to be true, and used as the basis for calls for direct US military intervention in the civil war.  And we know those accusations were never proved, and that it remains uncertain even now, almost four years later, who was actually responsible.

And we know that the bombing of Syria in 2013 was averted, despite President Obama's "red line" being crossed, because an enormous US and global campaign against such a disastrous escalation made it politically too costly to launch a new US war.  This was a president willing but not eager, or driven, to go to war. When Obama turned decision-making over to Congress, hundreds of thousands of people across the United States called and wrote and emailed their representatives, urging them to prevent a new war. In some offices calls were running six or seven hundred to one against a new bombing campaign.

And we know that President Obama turned it over to Congress in the first place because the British parliament, facing massive public opposition, made clear that the UK would not join its US ally in going to war against Syria. And eventually, when Congressional opposition became undeniable, Russia provided the US with a way out, arranging for international collection and destruction of Syria's chemical weapons arsenal. Chlorine was not included, and it is certainly possible that Syria didn't declare all of its weapons, or perhaps the precursor chemicals to make them, and but that claim was never proven. Ultimately, though, a US attack was averted.

Much is different now from 2013. The state of the Syrian civil war is far different - in 2013, the war was still new and uncertain; today it is recognized as the world's most devastating conflict.  There is little chance of UK involvement in a military attack on Syria this time around, so the sudden resistance of a key US ally isn't going to happen. Congress is not being consulted, and it is very unclear whether Congressmembers of either party are prepared to take on challenging a military campaign dressed up as a campaign for justice.

At the United Nations, Trump's Ambassador Nikki Haley seemed to be channeling George W. Bush even more than her actual boss. She threatened that if the Security Council did not act according to US demands—meaning if it resisted authorizing military escalation in Syria—that the US was prepared to go alone. International law, the UN Charter, diplomacy be damned.

And this is a president, a cabinet, a White House with no military or diplomatic experience, with no understanding of the complications of the roiling Middle East conflicts or the consequences of war, and with a personal eagerness to demonstrate power. This is not a president accountable to a political party, to Congress and its constitutional role in military decision-making, and certainly less accountable to international law.

"Trump's incoherent reaction showed the lack of any strategic understanding in his foreign policy."

Trump's incoherent reaction on Wednesday showed the lack of any strategic understanding in his foreign policy. He blames former President Obama for the crisis in Syria, while Trump of course had urged Obama not to attack Syria after the chemical bombing of 2013, tweeting in all caps "DO NOT ATTACK SYRIA — IF YOU DO MANY VERY BAD THINGS WILL HAPPEN."  He continued that criticism of Obama, but then switched gears to brag about his "flexibility," noting that "my attitude towards Syria and Assad have changed very much." It was a clear implication he's considering a military response, although he pulled back from any clarity on that as well. Asked what his message would be to the Iranian militias supporting the Syrian military, Trump first went off on an unrelated attack on the Iranian nuclear deal, eventually circling back to a threatening but vague "You will see what the message will be. They will have a message."

And the anti-Trump resistance that rose so heroically from the first moments of this presidency faces new challenges on a daily, even hourly basis. The mobilizations—in the streets, at the airports, at the White House, at the Supreme Court and beyond—and the letters and petitions and sit-ins and teach-ins and more, have been incredibly powerful.  Remobilizing those exhausted millions around an anti-war message will be a huge challenge for anti-war and indeed the whole range of social movements. As usual, much remains unknown.

But we know two crucial things, things that were true then, and remain true today.  We know that using chemical weapons—of any sort, in any war, against any target—is a crime. And we know there must ultimately be accountability for those who use it, regardless of who they are. That will take time.

In the meantime we know another truth: that a US military escalation against Syria (because we must not forget that US Special Forces and US bombers are already fighting there) will not help the victims of this heinous chemical attack, it will not bring the devastating war in Syria to a quicker end, it will not bring back the dead children. It will not defeat ISIS or end terrorism, it will create more terrorists. It will almost certainly cause more casualties, more injuries, and more dead. Maybe dead children.  There is still no military solution. This is what we know.

[Phyllis Bennis directs the New Internationalism Project at the Institute for Policy Studies.  Her most recent book is Understanding ISIS and the New Global War on Terror. Other books include Understanding the Palestinian-Israeli Conflict: A Primer, Understanding the U.S.-Iran Crisis: A Primer, Ending the Iraq War: A Primer, and Ending the Us War in Afghanistan: A Primer. If you want to receive her talking points and articles on a regular basis, click here and choose "New Internationalism." You can find her on Facebook here: http://www.facebook.com/PhyllisBennis ]
This work is licensed under a Creative Commons Attribution-Share Alike 3.0 License 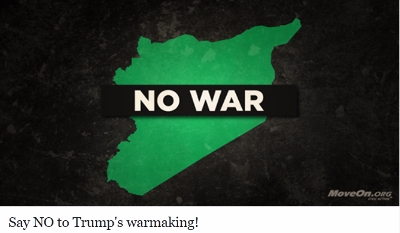 URGENT: Trump launched U.S. airstrike in Syria
Dear MoveOn member,
News is breaking that Donald Trump just ordered the launch of dozens of Tomahawk missiles to strike Syria.1
It's an illegal and unauthorized escalation that could have devastating consequences, killing innocent Syrians and costing the lives of U.S. service members.
Things could spiral quickly in the coming hours, and it's up to MoveOn members to lead a chorus of progressives in every corner of this nation saying NO to bombing the people of Syria.
Will you sign an emergency petition to Congress right now?
Congress must force consideration of an Authorization for Use of Military Force, and members of Congress should vote "no" and halt Trump's march toward war.
Let's be clear: There's no doubt that Bashar Assad is a brutal dictator who has slaughtered his own people and is complicit in the use of chemical weapons. But this is no humanitarian mission. These are missiles ordered by a flailing president with plummeting approval ratings, trying to show how "tough" he can be. The result will likely be increased suffering for the Syrian people. And this unilateral U.S. attack could possibly even draw in Russia and Iran, which have been close partners of the Assad regime.
The U.S. cannot bomb its way to peace, but it does have an essential role to play in the world, including 1) welcoming increased numbers of refugees fleeing Syria, 2) fully supporting international relief efforts for those most affected by this brutal civil war, 3) engaging in multilateral diplomacy at the United Nations to isolate Syria, and 4) sanctioning Russia and other nations which enable the Assad regime.
But none of this will be possible unless we first halt Trump's march toward war.
Please click here to add your name to an emergency petition calling for Congress to act.
Thanks for all you do.
–Ilya, Jo, Iram, Stephen, and the rest of the team
Source:
1. "Dozens of U.S. Missiles Hit Air Base in Syria," The New York Times, April 6, 2017