By rushing this bill through Congress, Republicans are creating a manufactured crisis that will devastate millions of families. GOP Trumpcare plan is a disaster. It would take away health care from millions of people, cost thousands more for middle-class and low-income Americans, and strip protections from people with pre-existing conditions, all to give a massive tax break to insurance company CEOs and the wealthiest Americans. 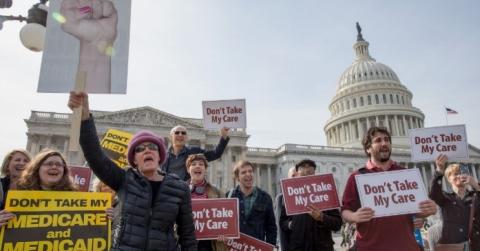 As Republicans voted to approve the bill in the House, hundreds of people rallied outside to protest Trumpcare's passage., Photo: MoveOn.org/Twitter // Common Dreams
After weeks of arm-twisting reluctant members and backroom negotiations, House Republicans voted Thursday to pass the much-maligned, "astonishingly evil" American Healthcare Act (AHCA), known as Trumpcare.
"God have mercy on your souls," Rep. Sheila Jackson Lee (D-Texas) told her GOP colleagues during Thursday's floor debate. The final vote was 217 in favor and 212 voting against. No Democrats voted for the bill.
Indeed, with no Congressional Budget Office (CBO) score on how many people would be affected, and with scant time for lawmakers to even read the latest iteration of the bill (that was not ever made available to the public), House Republicans have now officially backed legislation that would do untold damage to countless Americans.

"The GOP Trumpcare plan is a disaster. It would take away health care from millions of people, cost thousands more for middle-class and low-income Americans, and strip protections from people with pre-existing conditions, all to give a massive tax break to insurance company CEOs and the wealthiest Americans."
—Ben Wikler, MoveOn.org 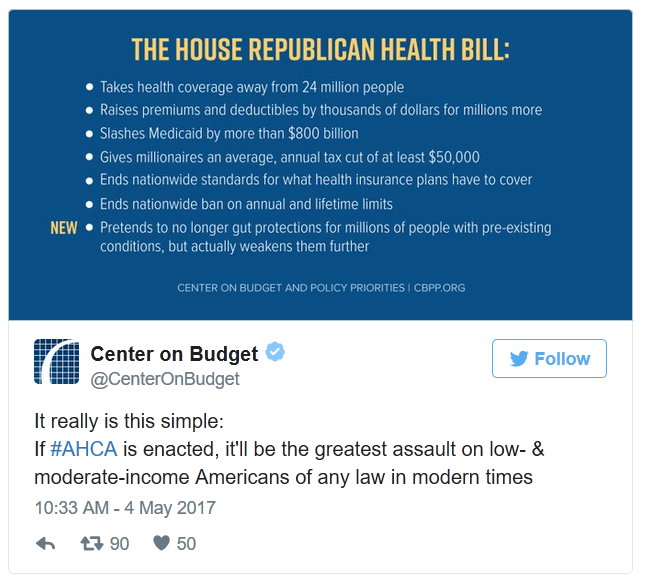 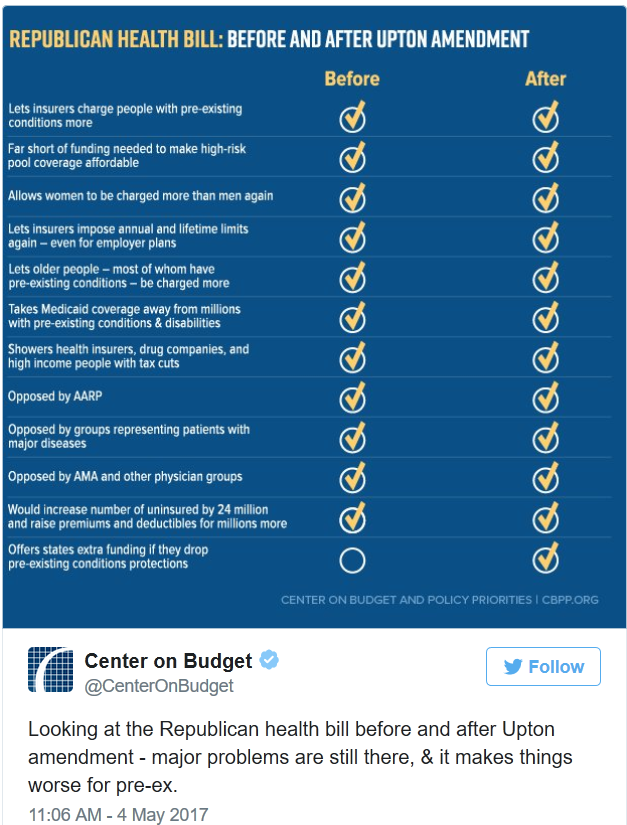 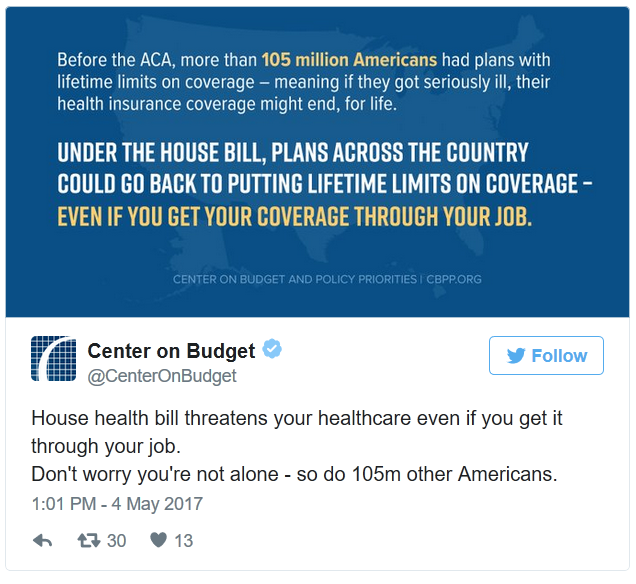 With so much wrong with it, and with so much popular opposition, many wonder why the GOP would push through a healthcare bill that will likely suffer defeat once it gets to the U.S. Senate.  Addressing that question, Huffington Post's Jeffrey Young wrote Wednesday:
Anyone wondering why Republicans are in such a big rush must remember two things. First, Trump suffered a humiliating loss with the first canceled vote and doesn't like looking foolish, so he'll do whatever he can to get a healthcare win. Second, Ryan and Senate Majority Leader Mitch McConnell (R-Ky.) early this year set in motion a procedural course that makes repealing Obamacare a prerequisite for an even bigger GOP priority: permanent tax cuts for rich people and corporations.
[...] This isn't exactly the "something terrific" Trump promised. This is what getting something done for the sake of getting it done looks like. The goal now seems to pass a bill - any bill - that the House can call "Obamacare repeal" so they can move on to cutting taxes on the rich and dumping this healthcare mess on the Senate's lawn.
"But if Trump and Ryan get their way and anything resembling the American Healthcare Act becomes the law of the land," Young continued, "the American people are going to notice that it doesn't make their lives any better?and for millions, makes them worse. Perhaps next on voters' agenda will be repealing and replacing Republicans."
As representatives head back to their home districts on Friday, the response should be swift.
As Faiz Shakir, national political director of the American Civil Liberties Union, said following the vote: "Now that this misguided legislation moves to the Senate, we urge senators of both parties to declare this bill dead on arrival. The voice of the people will not be silenced until they do."
Ezra Levin, executive director of the Indivisible Project, vowed that members of the Trump resistance movement will make sure hold these GOP reps to account. "Today's vote was just the first step in a difficult process for Trump's atrocious bill," Levin said. "Eleven days of recess starts today, and this is our change to immediately hold members of Congress accountable. We've succeeded for months because Indivisible groups across the country have been fighting back on their home turf. That's how we will keep fighitng, and that's how we will win. " 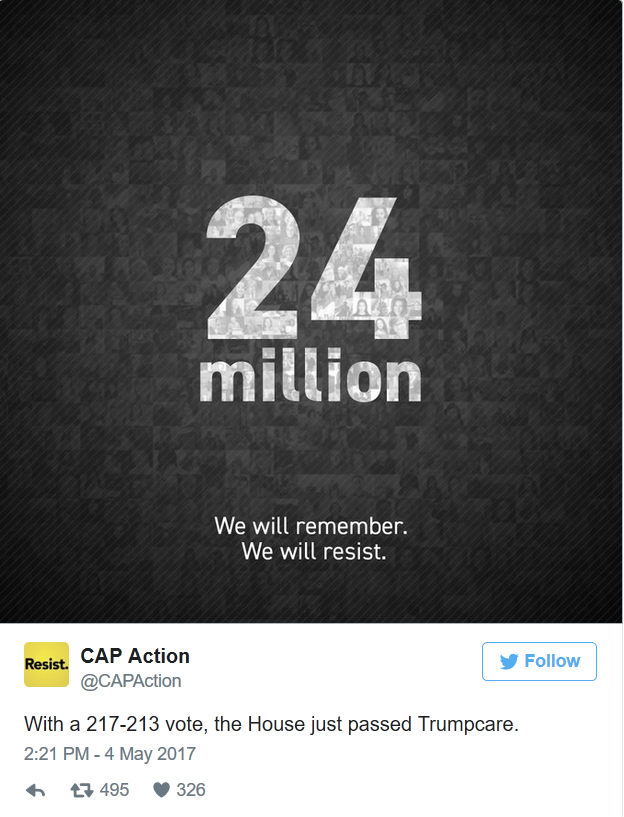 This work is licensed under a Creative Commons Attribution-Share Alike 3.0 License.
[Lauren McCauley is a senior editor and staff writer for Common Dreams since 2012. When not writing and editing headline articles, she spends her time producing documentary films. Her most recent project, Mississippi Messiah, is a feature about civil rights icon, James Meredith. She also co-produced the films The Hollywood Complex and Soundtrack for a Revolution, about the protest music of the civil rights movement. Previously, while writing for Newsweek, Lauren was nominated for the 2008 GLAAD Media Award for Digital Journalism. Email: lauren@commondreams.org.]