Risk is an incredibly gripping work, one made with an unprecedented level of access to Assange, but for all its intimacy, it still struggles to nail down its target. Instead, it’s more a story of Poitras herself, and the evolution of the movie she set out to make about Assange, who founded Wikileaks in 2006. 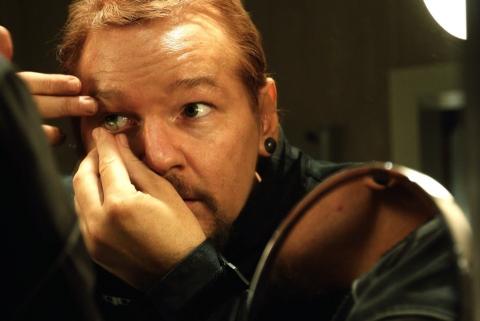 The new documentary from Laura Poitras, the director of Citizenfour, follows the Wikileaks founder Juian Assange as his public profile radically shifts around him.,

Every time Julian Assange appears in Laura Poitras’s new documentary, Risk, there’s a distinct impression of his quiet thrill at being on camera. His eyes constantly dart toward the lens whenever he’s being filmed, whether he’s chatting to his cohorts at Wikileaks, donning an elaborate disguise (including different-colored contact lenses) to evade public attention, or loudly mocking the accusations of sexual assault made against him by two Swedish women. He has the bearing of a paranoid man, understandably enough, but there’s also a constant performative element to his behavior. Even as he’s hiding out from various authorities, it feels like Assange wants to be watched.

Poitras began filming Assange and his allies in 2011, after some of Wikileaks’ most notorious releases, including the “Iraq War Logs” provided by the military intelligence analyst Chelsea Manning that included footage of an airstrike that killed two Reuters journalists.

Risk is an incredibly gripping work, one made with an unprecedented level of access to Assange, but for all its intimacy, it still struggles to nail down its target. Instead, it’s more a story of Poitras herself, and the evolution of the movie she set out to make about Assange, who founded Wikileaks in 2006. She’s upfront about this approach throughout the movie, providing sporadic voice-over narration about her changing view of Assange during the years she spent filming him and other members of Wikileaks. “I thought I could ignore the contradictions,” she intones. “I thought they were not part of the story. I was wrong. They’re becoming the story.

”Poitras began filming Assange and his allies in 2011, after some of Wikileaks’ most notorious releases, including the “Iraq War Logs” provided by the military intelligence analyst Chelsea Manning that included footage of an airstrike that killed two Reuters journalists. It begins with footage of Assange and his colleague Sarah Harrison trying to get then-Secretary of State Hillary Clinton on the phone, to warn that Wikileaks’ own security had been breached and that unredacted State Department cables were about to be published online. Harrison and Assange’s demeanor is breezy even in this tense moment; they shoot wry grins at each other as they pass the cellphone back and forth. There’s a sense that the radical governmental transparency they seek is becoming the new normal.How Poitras gained access to the secretive inner core of Wikileaks is not disclosed, but her record as a searing documentarian was already firmly established by 2011, thanks to movies like My Country, My Country (a 2006 work about life in Iraq under U.S. occupation), and The Oath (about Osama Bin Laden’s former driver and his detention at Guantanamo Bay). While she was making Risk, Poitras also worked with Edward Snowden, and documented his leak of the National Security Agency’s illegal wiretapping practices in the Oscar-winning Citizenfour (2014).

During the years she spent with Assange, his public profile mutated again and again. Wanted for questioning in Sweden in relation to two sexual-assault cases, he appealed his extradition from the United Kingdom and implied it was a ruse intended to ultimately deliver him to the U.S., where Wikileaks was under grand-jury investigation. When his appeals failed, Assange fled to London’s Ecuadorian embassy, where he remains confined to this day. Over the last year, as Wikileaks released tens of thousands of emails relating to the Clinton campaign, Assange was accused by intelligence agencies of being in league with the Russian government, or at least functioning as an unwitting patsy for its efforts to undermine Clinton.

Poitras charts all of this, from Assange’s meetings with his lawyers (who exasperatedly tell him to stop referring to the charges against him as a “radical feminist conspiracy”) to his elaborate escape into the embassy. The director’s relationship with her subject changes for the worse over the years, but Assange seems consistently aloof. He’s a preening, icy figure throughout the film, often speaking in vague generalities and ruminating on the risks he’s taken, and how far he’d be willing to go to uphold his principles.

Still, the film doesn’t keep the audience at a similar distance. Much as Citizenfour’s look at Snowden felt disarmingly raw, the inside footage of Wikileaks at work is similarly riveting. There are unspoken dynamics between Assange and his co-workers that Poitras largely leaves to the imagination. But as the years pass, it’s easy to come away with the overall impression of noxious sexism pervading this small community of hackers and activists. Whether or not you view Assange’s actions as laudable, in the film, he’s a very difficult figure to engage with.

Risk first premiered a year ago at the Cannes Film Festival, with a vastly different cut that was reportedly a much more straightforward, positive portrayal of Wikileaks and Assange. But though Poitras has said that she herself believes in the organization’s goals and thought the leaks of the Clinton campaign emails were newsworthy, it’s clear that her original perception has shifted. Through the 2016 election, Assange becomes even more frustratingly opaque; his jealousy of other figures like Snowden, and his inability to weather criticism, is ever more apparent. He’s still performing for the camera any time he’s being interviewed, but there’s the sense that he’s keeping his real feelings in some deep reserve. As Risk progresses toward the present day, it becomes less a tale of that performance, and more one of the havoc it’s wreaked.

Risk opened in theaters on Friday, May 5th.

[David Sims is a senior associate editor at The Atlantic, where he covers culture.]