This is a constitutional crisis. The only way forward is to ensure an independent and credible investigation—whether by a special prosecutor or a select congressional committee or both—into the Russian meddling and the administration’s efforts to obstruct the inquiry into the Trump campaign’s ties to it. The notion that Trump and Sessions took action against Comey because of his unfairness to Clinton may be the most brazen effort at “fake news” or “alternative facts” yet 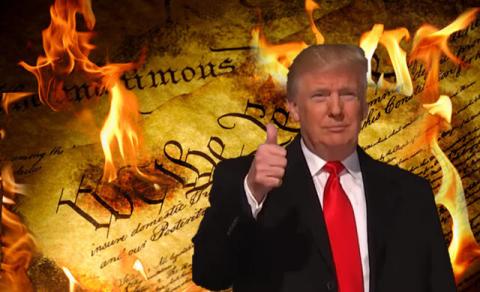 James Comey is no saint. But thanks to Donald Trump, he is now a martyr. On May 9, in a twist that would have seemed far-fetched even on House of Cards, President Trump fired Comey as director of the FBI on the recommendation of Jeff Sessions, his attorney general. According to the administration, Trump did so not because Comey was investigating the possible collusion of Trump campaign officials with the Russian government but because of how Comey mishandled the investigation of Hillary Clinton’s private e-mail server.

This nakedly concocted justification has caused deep alarm among leading members of both parties in Congress. If the president and his attorney general are firing the FBI director because of the FBI’s investigation into the campaign that got the president elected—a campaign in which the attorney general had a direct part—it amounts to an obstruction of justice and an attempt to place the president above the law.

This is a constitutional crisis. The only way forward is to ensure an independent and credible investigation into the Trump campaign’s ties to Russian melding in the election and the administration’s efforts to obstruct such an inquiry. This could be done by a special prosecutor or a select congressional committee or both.

The indications of unlawful behavior by the administration are strong. On March 2, Sessions expressly committed to recusing himself from the FBI’s Russia investigation after it was reported that he had failed to disclose meetings with the Russian ambassador while advising Trump’s campaign; so he should have had zero involvement in any decision affecting the investigation. Yet he did not recuse himself from the task of firing the man in charge of that very investigation. In fact, administration officials said Attorney General Sessions “had been charged with coming up with reasons to fire him,” and Sessions directed his newly appointed deputy, Rod Rosenstein, to write a memo justifying Comey’s dismissal.

Rosenstein appears to have conducted no original inquiry into Comey, but instead opportunistically cobbled together criticisms of his actions in connection with the Clinton e-mail investigation before Trump took office. Many commentators, myself included, argued last fall that Comey’s actions were doubly improper. When he closed the investigation into Clinton’s e-mails, after finding no evidence of criminal wrongdoing, he should not have held a press conference to excoriate her as “extremely careless.” And when, just eleven days before the election, he briefly reopened the investigation upon learning that some Clinton e-mails had been discovered on the laptop of Huma Abedin’s husband, Anthony Weiner, he should not have made that fact public, as it had a real risk of affecting the impending election.

However, Trump and his advisers notably did not previously share these criticisms of Comey. To the contrary, Trump’s pronouncements—and those of his close adviser and now attorney general—show that his campaign went out of its way to endorse Comey’s actions in the Clinton case. At the time, Trump, who had criticized Comey for letting Hillary Clinton off and promised to jail her if he were elected, said that Comey “brought back his reputation” by disclosing the reopening of the Clinton investigation. “It took a lot of guts.” Sessions, one of Trump’s most stalwart defenders throughout the campaign, said, “He had an absolute duty, in my opinion, eleven days or not, to come forward with the new information that he has and let the American people know that, too.”

Yet in Sessions’s letter to Trump on Tuesday, he reversed course, writing: “I have concluded that a fresh start is needed at the leadership of the FBI…. I must recommend that you remove Director James B. Comey, Jr.” And the Rosenstein memo on which he based his recommendation specifically cites Comey’s inappropriate release of “derogatory information about the subject of a declined criminal investigation”—namely, Hillary Clinton. Neither Sessions nor Trump explained why they contradicted their earlier stated views of Comey’s actions. Just as in the case of Trump’s travel ban on Muslims, the president’s own public statements repudiate his official reasons for taking a deeply troubling executive action.

The president and attorney general have constitutional authority to dismiss the FBI director, but by statute directors are intended to serve ten-year terms, precisely so that they have a degree of independence from the president. Only one other FBI director has been dismissed in US history, by Bill Clinton in 1993, in a case in which the director, William Sessions—no relation to Jeff Sessions—was alleged to have committed ethical improprieties, and there was no hint of an attempt by the administration to obstruct justice.

The notion that Trump and Sessions took action against Comey because of his unfairness to Clinton may be the most brazen effort at “fake news” or “alternative facts” yet from a president who has shown no reluctance to lie, even and especially when the truth is plain for everyone to see. And of course, if it was Comey’s preelection performance that was the real basis for his removal, he could have been fired on day one of the administration. Instead, as The New York Times has reported, his firing came just days after Comey had asked for “a significant increase in resources” for his Russia investigation. As Senator Dick Durbin of Illinois told the Times, “I think the Comey operation was breathing down the neck of the Trump campaign and their operatives, and this was an effort to slow down the investigation.” If collusion between the campaign and Russia is revealed, it would almost certainly bring down Trump’s presidency.

So just as Nixon fired Special Prosecutor Archibald Cox as he neared the truth about Watergate, so Trump and Sessions seem to be firing Comey just as his investigation accelerates. They had to know they would take tremendous criticism for doing so, including from senior members of their own party. Already on May 9, Senator John McCain issued a statement saying that the action reinforced the need for a Senate select committee to investigate Russia’s interference in the 2016 election. (Unlike a special prosecutor, a select committee does not pursue criminal responsibility, but it can provide a public accounting for any misdeeds and information that can lead to further action. A select committee investigated Watergate, for example.)

Senator Richard Burr, the Republican chair of the Intelligence Committee, said he was “troubled by the timing and reasoning of Director Comey’s termination.” And Senator Jeff Flake said that he could find no “acceptable rationale” for Trump’s action. But Trump and Sessions apparently chose to bear these denunciations knowing that they would pale in comparison to the reaction that an investigation’s findings of the Trump campaign’s collusion with the Russians would spark.

It remains possible, of course, that Trump’s campaign officials did not conspire with the Russians. But there is no doubt that Russia interfered directly in the election in an attempt to aid Trump’s chances. And there are serious allegations that several high-level Trump campaign officials had compromising ties to Russian officials, including Paul Manafort, his campaign manager, Carter Page, his foreign policy adviser, Roger Stone, his longtime adviser, and Michael Flynn, whom Trump appointed national security adviser over the warnings of President Obama—as well as of numerous other officials, including acting attorney general Sally Yates and New Jersey governor Chris Christie, who briefly led Trump’s transition team—that Flynn could not be trusted.

The somewhat anemic current investigations in both the House and the Senate are controlled by Republicans, and as House Intelligence chair Devin Nunes has shown, party loyalty can all too easily compromise a meaningful inquiry. In early April, Nunes was forced to step down from his committee’s investigation after it was revealed that he had briefed Trump about it and had also received classified information from the White House.

That’s why Comey was such a threat to Trump. He was the only official independent of the administration and its party reviewing the campaign’s ties to Russia. His replacement will be hand-picked by Trump and Sessions, both of whom are at risk of being implicated in the investigation.

The vitality of the rule of law in the United States will depend on whether the American people are willing to hold the Trump administration accountable. As Archibald Cox said, shortly after Richard Nixon fired him as Watergate special prosecutor: “Whether ours shall continue to be a government of laws and not of men is now for Congress and ultimately the American people.” We remain a democracy, at least for the time being, and if we the people insist on an independent investigation, we will get one. But only if we insist—including by demanding that our elected representatives take full responsibility for addressing this crisis with every power at their disposal. As Ben Franklin reportedly warned some 240 years ago, the Framers created “a republic, if you can keep it.” Trump’s latest action puts that question once again to the test.

[David Cole is the National Legal Director of the ACLU and the Honorable George J. Mitchell Professor in Law and Public Policy at the Georgetown University Law Center.]