The truth is ugly as sin. The NFL is denying Colin Kaepernick employment not because he isn’t “good enough” but because he is being shut out for the crime of using his platform to protest the killing of black kids by police. NFL owners don’t make pariahs out of players who beat women or face accusations of murder. Kaepernick’s pariah status is about sending a shot across the bow at every political athlete—particularly black athletes—that they better toe the line. 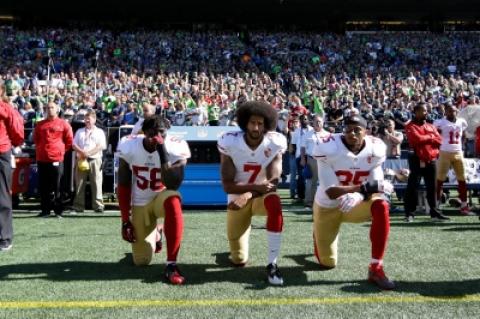 From left, Eli Harold, Colin Kaepernick and Eric Reid of the San Francisco 499ers, knelt during the national anthem at an NFL game in September 2016., photo credit: Ted S. Warren/Associated Press // New York Times
The Problem with Kaepernick's Political Views: He Plays Football
By Ken Belson
June 16, 2017
New York Times
Maybe Colin Kaepernick is in the wrong league.
Last season, Kaepernick, the former San Francisco 49ers quarterback, set off a national debate when he knelt during the national anthem before games, as a way to shine a light on police violence and racial injustice. Now a free agent, he has been unable to find a job, leading to speculation that teams are steering clear of him because of his controversial stance.
If Kaepernick were a basketball player, things might be different. In the N.B.A., the biggest stars routinely share their opinions on a range of thorny social issues. Top coaches, including Steve Kerr of the Golden State Warriors and Gregg Popovich of the San Antonio Spurs, have been critical of President Trump. The league’s commissioner, Adam Silver, was widely lauded for permanently barring Donald Sterling, the former owner of the Los Angeles Clippers, who was caught on tape using racist language.
But Kaepernick is trying to land a job in the N.F.L., a league filled with players who talk proudly about toeing the line and keeping their heads down. Coaches and team owners have an almost allergic reaction to addressing political issues. The commissioner, Roger Goodell, speaks often about patriotism. Few leagues spend as much time wrapping themselves in the flag.
Never mind that N.F.L. teams have offered million-dollar contracts to players convicted of animal abuse, domestic violence and other transgressions. Kaepernick, it would appear, crossed an immutable line, and he is now paying a price as teams hire journeyman backups and younger, untested quarterbacks over someone who just a few years ago led his team to the Super Bowl.
Read more here.
The NFL’s War Against Colin Kaepernick
Leading media members are carrying on a disinformation campaign against the greatest political lightning rod in sports.
By Dave Zirin
June 8, 2017
The Nation 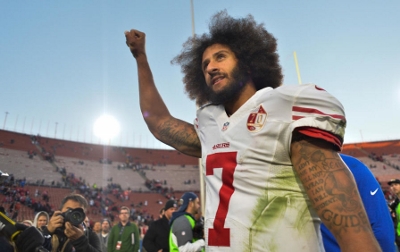