How Can Democrats Win - Who is the Base; Problem of Working Class White Voters; Building a Winning Coalition; Learning Lesson from Ossoff Defeat

Why the white worker theme is harmful. It’s a mistake to racialize an economy that harms the entire working class. What has happened to more whites now is that the market has moved past them as well. It took almost 40 years to get to this point, in the near term no recipe of policy fixes will sufficiently remedy the effects. Democrats need to focus on reversing those long-term trends, but also must have something to offer workers now. 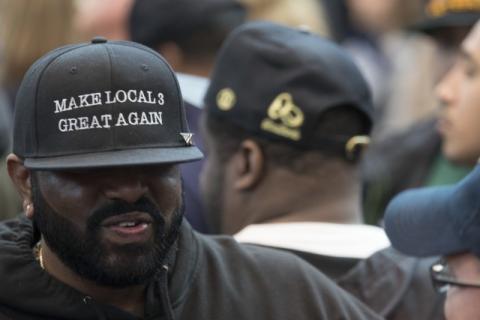 Working-Class Rainbow: All workers—black and white—benefit from union bargaining power in the fight for economic justice.,AP Photo/Mary Altaffer // American Prospect
After all, if every economic issue is framed as a struggle between a hard-working white middle class and undeserving minorities, then workers of all shades will be left fighting for scraps while the wealthy withdraw further into their private enclaves.”  —Barack Obama, Farewell Address, Chicago, January 2017
After three losses to Ronald Reagan and George H.W. Bush, a trifecta last accomplished by Presidents Harding, Coolidge, and Hoover, there was much hand-wringing among Democrats about the loss of the South and the vanishing loyalty of Southern whites. William Galston and Elaine Kamarck at the Progressive Policy Institute argued that the electoral math made the South the true presidential battleground; that Democrats could not win by being more liberal or hoping to motivate black and poor voters to increase their voter participation. Thomas Edsall and Mary Edsall similarly warned in the pages of The Atlantic that the South was key, and it was lost because the liberal orthodoxy was too tied to race, and out of touch with white working-class voters.
“Liberal” candidates like Tom Harkin, Dick Gephardt, and Michael Dukakis were out. Their message was deemed too Northern, elite, and alien to the needed Southern white voter. In was a candidate who could rebrand the Democratic Party and break liberal orthodoxy, proving the party could be tough on crime and defense, and reinvent welfare and the social state. This turned out to be Bill Clinton. Now, the defeat of Hillary Clinton has once again caused Democrats to argue about what is needed to win the white vote.
Countless articles have focused on what Democrats have done wrong. And much of the theme remains the same as in 1989—that there is a noble white worker who has been betrayed. Here is how the Edsalls portrayed one such voter back in 1989:
“You could classify me as a working-class Democrat, a card-carrying union member,” says Dan Donahue, a Chicago carpenter who became active in the campaign of a Republican state senator in 1988. “I’m not a card-carrying Republican—yet. We have four or five generations of welfare mothers. And they [Democrats] say the answer to that is we need more programs. Come on. It’s well and good we should have compassion for these people, but your compassion goes only so far. I don’t mind helping, but somebody has got to help themselves, you’ve got to pull. When you try to pick somebody up, they have to help. Unfortunately, most of the people who need help in this situation are black and most of the people who are doing the helping are white. We [white Cook County voters] are tired of paying for the Chicago Housing Authority, and for public housing and public transportation that we don’t use. They [taxpayers] hate it [the school-board tax] because they are paying for black schools that aren’t even educating kids, and the money is just going into the Board of Education and the teachers’ union.” 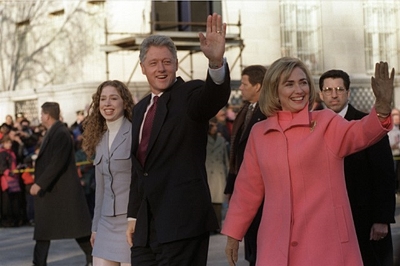 Clinton’s view that single mothers should be written out of the act—for that is what the end of “welfare as we know it” meant—was not viewed as an attack on working people. But it was.

The Social Security Act, let’s recall, was intended to protect the income of working-class American families. Yes, it was an entitlement, and proudly so. Social Security was first denied to most black Americans, but then extended. Aid to Families with Dependent Children (AFDC) was a core part of Social Security. Clinton’s view that single mothers should be written out of the act—for that is what the end of “welfare as we know it” meant—was not viewed as an attack on working people. But it was. Black women, who have historically had the largest labor force participation rate among all racial groups, and who work more hours than any racial group among women, were stigmatized as being made lazy because they finally had access to that part of the Social Security Act which had initially been denied them when it was passed.
Temporary Assistance for Needy Families, the feeble successor to AFDC, removed a class of workers from Social Security protection. Because of the “Nannygate” scandal surrounding Clinton’s attorney general nominee, protections for domestic workers within the Social Security Act were watered down. Despite the ravaging effect of the Reagan-era downturn on unemployment insurance, the Clinton administration offered little to repair a state-based system that had gone bankrupt and then refinanced itself by cutting access to benefits and benefit levels.
THE HARD REALITY OF TODAY'S level of inequality is this: For an increasing share of the population—black and white—the market no longer works to serve basic needs like housing, health insurance, child care, or college education. As the share of income held by the middle 60 percent declines, the top 10 percent’s share continues to grow, and within that, the top 1 percent.
The effect of heavy concentrations of money in fewer hands means that market-based allocations of resources are dictated by a smaller set of decision-makers. Businesspeople react to where the money is, whether they are home-builders, college presidents, or day-care providers. In the market, price is used as the rationing device, and prices follow where the money is.
When the middle class dominated the economy, it meant that prices for key personal investments followed increases in the incomes of the middle class. The government stepped in with housing, health, and education policies to subsidize those in the bottom 20 percent whose incomes were not keeping pace, and who would be rationed out of housing, health, and education by a market outcome. Worsening income inequality meant rising demands on government programs to ensure fair access to health and education, as prices rose faster than low income. Through the 1990s, the effect of discrimination made blacks synonymous with the bottom 20 percent, as they were overrepresented in the bottom income group.
What has happened to more whites now is that the market has moved past them as well. Pricing for child care and college education, essentials for their children, are outstripping their income growth; instead, prices are tied to the growth in income for the top 1 percent in the case of college tuition. And whites in the bottom 20 percent of income, who hold considerably more wealth than blacks in any part of the income distribution, can no longer self-insure themselves against the bumps in the economy.
As it took almost 40 years to get to this point, in the near term no recipe of policy fixes will sufficiently remedy the effects. Democrats need to focus on reversing those long-term trends, but also must have something to offer workers now. But every year that Trump is in office, that goal becomes more difficult.
Union representation, a key element in reversing those trends, continues to fall. More states are likely to adopt “right to work” laws. It will be increasingly difficult to rebuild workers’ voice in deciding how corporate output will be divided between wages and profits. That is the greatest source of the rising inequality. The hollowing out of the middle is not the result of automation. Rather, it reflects the relative advantage of those workers more closely tied to management, who squeeze down the income share for the middle and below.
What Reagan achieved in the 1980s was the illusion that by letting the floor fall, the middle could be protected. Unfortunately, too many white workers still have a view of the economy fed by the Reagan framework of government’s role. The unabated concentration of income will make after-tax methods of redistribution more vital so that Americans can have access to housing, education, and health. The Affordable Care Act, a market-based approach to health access, is one example where the fix is inadequate to rising income inequality, and made worse because it naïvely assumed that states would expand public access to address the gap in affordability.
UNDER TRUMP, RACE WILL complicate the effort to devise palliatives to rising inequality until more effective remedies can take effect. His dismantling of anti--discrimination offices within the federal government will create new downward pressures on an already stressed black working class. And the decline in union membership is more dangerous to black workers, who have higher union density than white workers and who rely far more than whites on union bargaining power to get higher wages. Further, black union density is more heavily reliant on public-sector bargaining than is true for whites, and public-sector unions are a target of Trump, who will abet the attack on public-sector unions taking place at the state level.
Under Trump, the gap between the experience of black and white workers will grow. Trump has already changed the political discourse. He has revived a strain of Southern populism that allows for asserting white privilege. 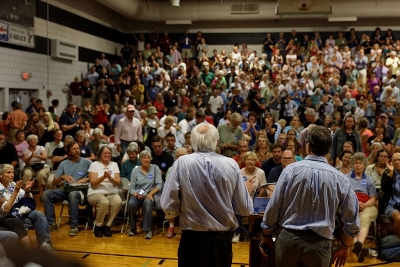 The Democrats won’t solve their electability issues repeating the debate about white voters that they had in the late 1980s. They need to focus on the urgency of the effect of income inequality on American democracy. They need to sound the alarm. And they need to wake up and see who they are in bed with. The power elite of the party think they have freed themselves of a dependency on union support. But the Wall Street vision of the economy is poison for workers of all races and for Democrats.

When the Republican Party of the 19th century cut its deal to end Reconstruction and concentrate on winning the white vote, it launched the Gilded Age and the unremittent growth of inequality that collapsed in the Great Depression. It was accompanied by a Southern populism that entrenched a harsh racial code. Trump’s victory puts us within reach of repeating that mistake in history. Democrats need to be wary, and shrewd. How they handle this could entrench the dystopia of more Trumps—or create a new multiracial coalition of class uplift.
[William E. Spriggs is a professor of economics at Howard University. He served as assistant secretary for policy in Obama’s Labor Department and was executive director of the National Urban League’s Institute for Opportunity and Equality.]
This article appears in the Summer 2017 issue of The American Prospect magazine. Subscribe here.
Subscribe to Portside