This One Imperfection In Nuclear Physics Allowed Earth To Exist

The only reason we can exist, today, is because one tiny imperfection in the early Universe allows the stars to grow hundreds of times as massive. 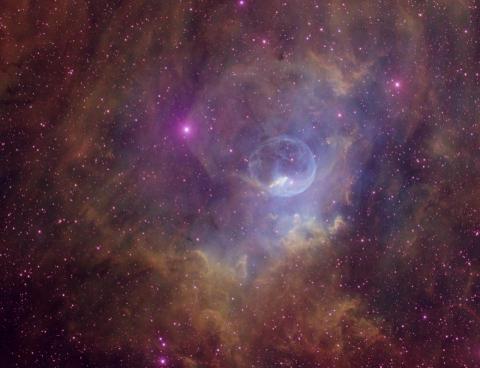 The Bubble Nebula is on the outskirts of a supernova remnant. Nebulae like this showcase where massive stars are born, and also where heavy elements get added back into the Universe, giving rise to rocky planets and organic materials like on Earth.,T.A. Rector/University of Alaska Anchorage, H. Schweiker/WIYN and NOAO/AURA/NSF

In order to create a rocky planet that's teeming with life, the Universe needed to create large amounts of the heavy elements required for life's processes. To make many of those elements, such as Tin, Iodine, Selenium, Molybdenum, Zinc, and Copper, you need supernovae to have occurred many times in our galaxy's past. To get many more, such as Iron, Calcium, Cobalt, Sulfur, and Potassium, you need stars massive enough to create them. Yet the Universe was born, almost exclusively, with mere hydrogen and helium. If all you had was hydrogen and helium, it would be impossible to make a star more massive than about three times the Sun's mass; these heavy elements would never be created and spread throughout the Universe. The only reason we can exist, today, is because one tiny imperfection in the early Universe allows the stars to grow hundreds of times as massive. 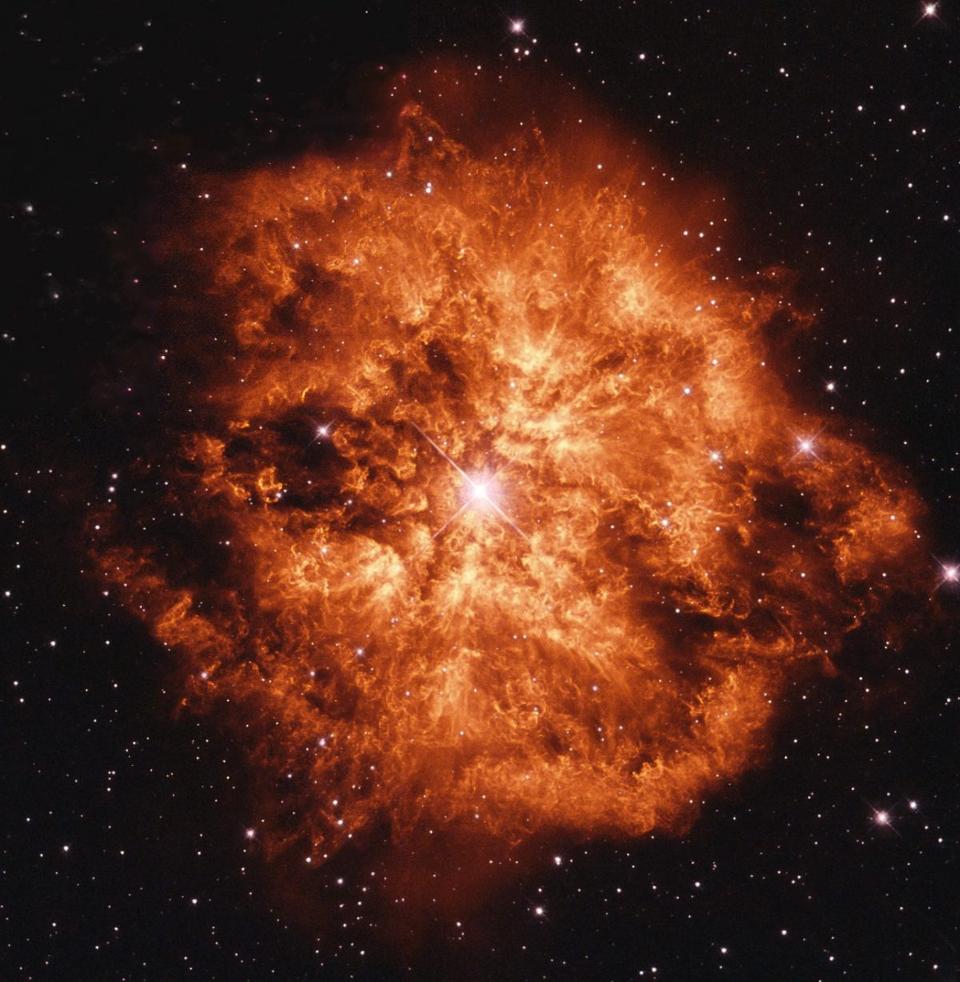 The ultra-massive star Wolf-Rayet 124, shown with its surrounding nebula, is one of thousands of Milky Way stars that could be our galaxy's next supernova. It's also much, much larger and more massive than you'd be able to form in a Universe containing only hydrogen and helium.

In most Milky Way-sized galaxies, we see multiple supernovae every century, indicating that these massive stars are common. In fact, there's strong evidence that wherever in the Universe you form large bursts of stars, even for the first time, you'll make many stars massive enough to create these heavy elements. But if all you had were hydrogen and helium, this would create a huge problem: hydrogen fusion begins at temperatures of approximately 4,000,000 K, which requires at least 1.6 × 1029 kg of mass to collapse down into a star. Once hydrogen fusion ignites, however, the outward flux becomes so energetic, very quickly, that no new mass can be added to that star. Once you become a star, you push those gaseous elements that would otherwise gravitate towards you away, preventing your star from growing further.

A combination of instruments on the ESO's very large telescope reveals wide-field and narrow-angle views of the Tarantula Nebula. The cluster shown at the center contains some of the most massive stars in the known Universe, including many over 100 solar masses.

If all you had were conventional hydrogen and helium, where hydrogen is made of one proton and helium is made of two protons and two neutrons, your proto-star would contract down rapidly, heating up to fusion temperatures in short order and emitting large amounts of high-intensity light. This radiation pushes against the nearby material that helped form the star in the first place, blowing it away from the star and overcoming gravity. You might form stars up to about three times the mass of the Sun, but the more massive ones — the ones we need to create an Earth-like world — would never come to exist. 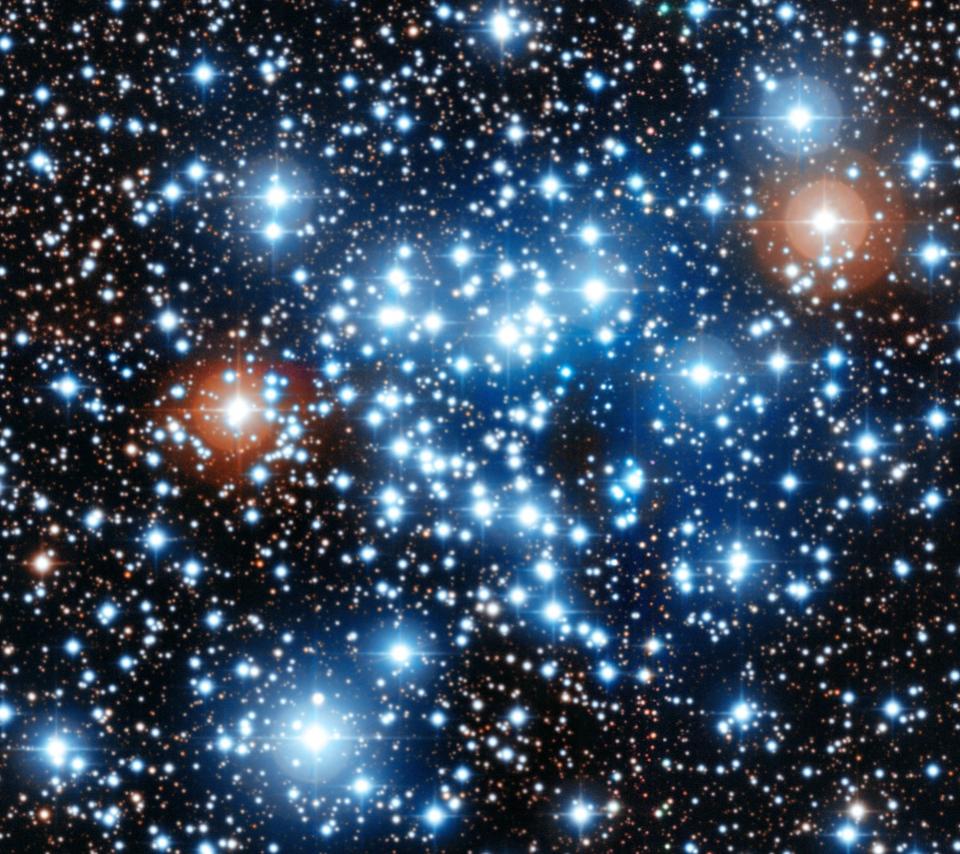 Stars form in a wide variety of sizes, colors and masses, including many bright, blue ones that are tens or even hundreds of times as massive as the Sun. This is demonstrated here in the open star cluster NGC 3766, in the constellation of Centaurus.

Thankfully, the Universe has, even from birth, an extra ingredient that makes much more massive stars possible. That extra ingredient is a heavy isotope of hydrogen: deuterium, which contains a proton and a neutron together. When you have deuterium and normal hydrogen nuclei together, it takes only a temperature of 1,000,000 K to fuse them together into helium-3, producing radiation that's much less violent and forceful. This deuterium-burning is the first nuclear reaction to happen in a proto-star, and it pushes the core outwards enough to cause the temperature to rise far more slowly than if there were only hydrogen. Even a small amount of deuterium, less than 0.01% of the initial star's mass, can delay the temperature increase up to hydrogen fusion by tens of millions of years, buying gravitation the time it needs to grow stars up to tens or even hundreds of times the mass of the Sun.

From beginning with just protons and neutrons, the Universe builds up helium-4 rapidly, with small but calculable amounts of deuterium and helium-3 left over as well.

So where did this deuterium come from? During the first few seconds after the Big Bang, the Universe was made of protons and neutrons, which attempt to fuse in a chain reaction to form heavier elements. But that first step involves making deuterium, which is easily destroyed by the high-energy radiation permeating the young Universe. It isn't until minutes have passed that you can make deuterium without it being blasted apart. While this leads to a Universe that's about 75% hydrogen and 25% helium, there are tiny, trace amounts of deuterium and helium-3 that get formed, along with even smaller amounts of lithium-7. 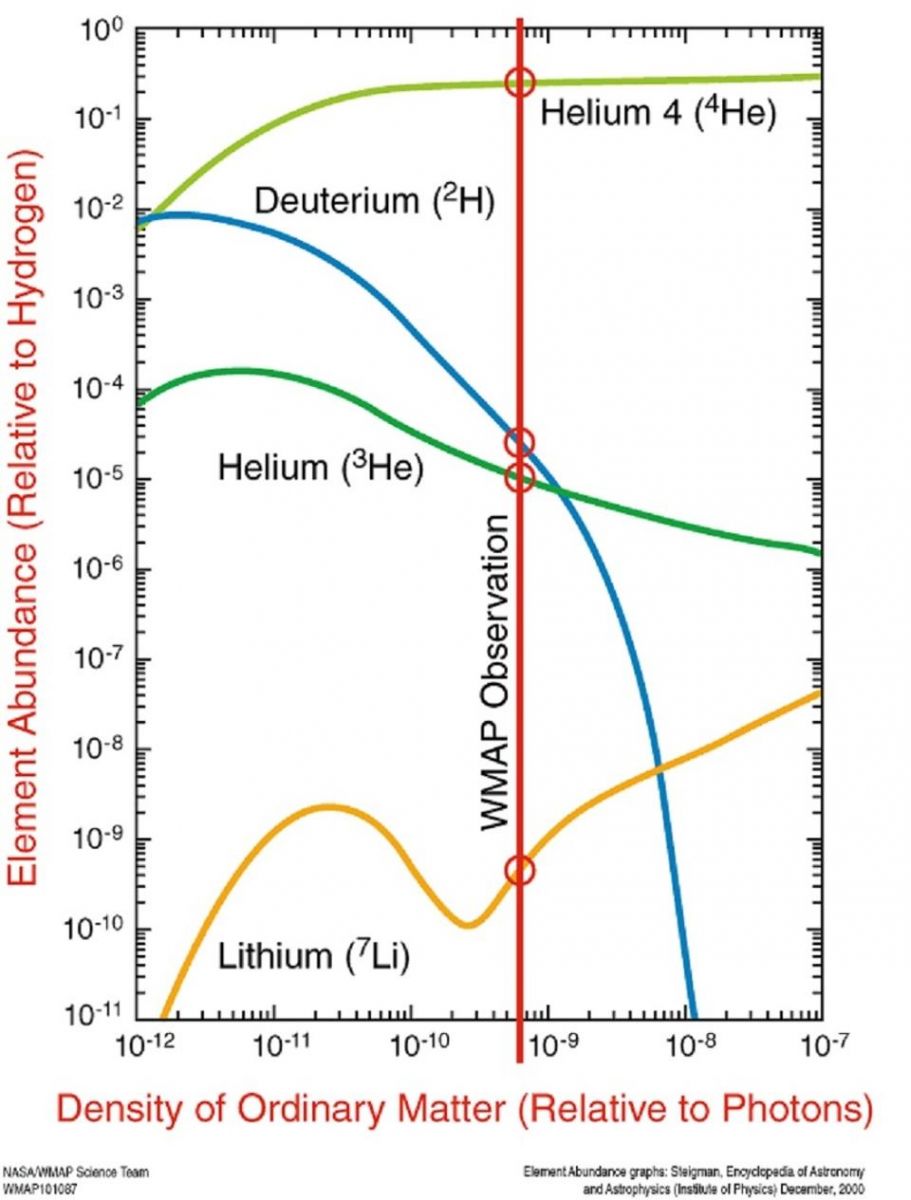 The abundances of helium, deuterium, helium-3 and lithium-7 are highly dependent on only one parameter, the baryon-to-photon ratio, if the Big Bang theory is correct. The fact that we have 0.0025% deuterium is needed to allow stars to form as massive as they do.

Even though only about 0.0025% of the Universe, by mass, becomes deuterium (about 1/40,000th) in this process, that's enough to give even the first stars up to 50 million years to grow in size before hydrogen fusion takes over. Once you make stars that massive, the standard story of hydrogen-helium-carbon fusion takes place, generating large quantities of heavier elements that will get returned to the Universe for future generations of stars. 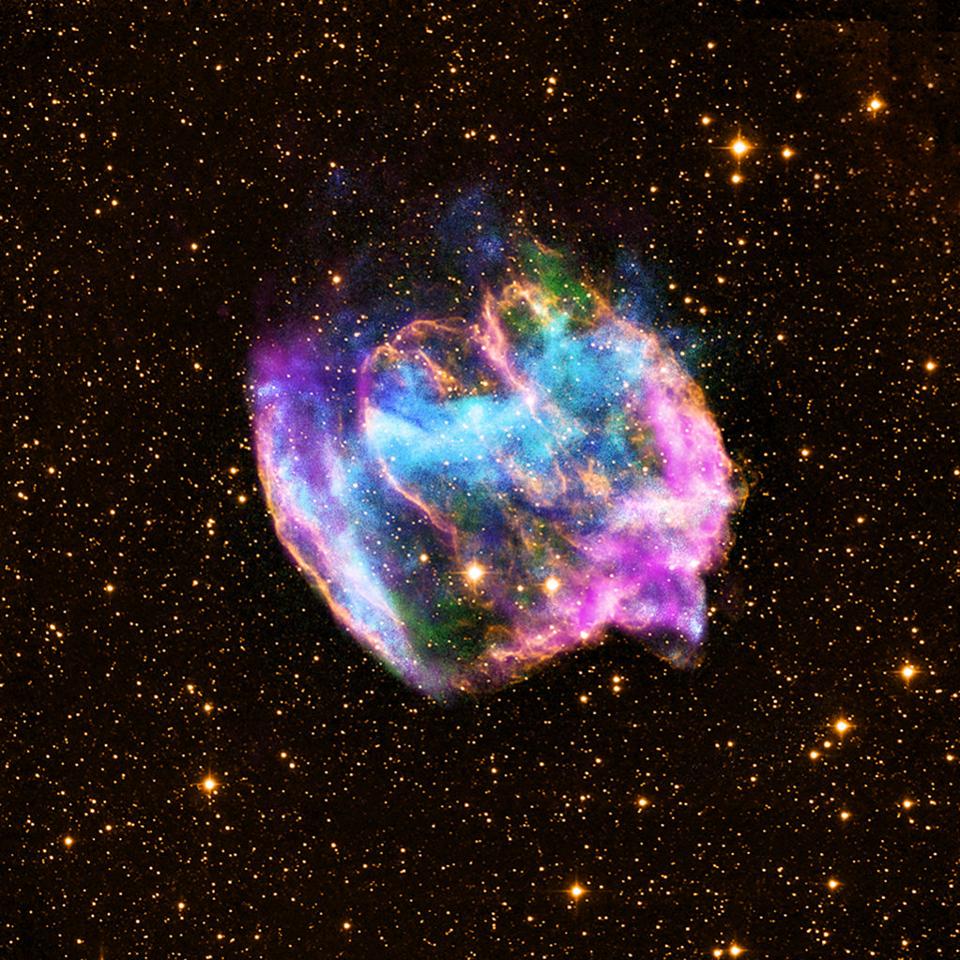 The nebula from supernova remnant W49B, still visible in X-rays, radio and infrared wavelengths. It takes a star at least 8-10 times as massive as the Sun to go supernova, and create the necessary heavy elements the Universe requires to have a planet like Earth.

Rocky planets become possible; the essential elements for life get spread throughout the Universe. By time many billions of years have passed, planets like Earth can form, and organic materials like sugars, amino acids, and aromatic hydrocarbons will simply bind together naturally. The raw ingredients for everything we know life requires automatically pop into place.

A multiwavelength view of the galactic center, showing stars, gas, radiation and black holes, among other sources. Heavy elements and complex molecules also abound, and much of this material will be useful in forming future generations of stars.

But without that tiny bit of inefficiency — without that easily-destroyed deuterium left over from the Big Bang to delay the fusion reactions in the cores of stars — it would all be impossible. Our Universe is an imperfect place. But that's an absolute necessity. Without those imperfections, we'd never be able to exist.

Astrophysicist and author Ethan Siegel is the founder and primary writer of Starts With A Bang! Check out his first book, Beyond The Galaxy, and look for his second, Treknology, this October!