Liberals Strike Back... Against Single Payer

Ironically, healthcare reform efforts have sought to "improve and expand" every element of the present system, except the program that works best: Medicare. The Clintons tried to expand HMOs, Obama expanded private health insurance and Medicaid, the GOP tried to expand "individual purchase. Medicare—if improved and expanded to all—could confront the industry, contain prices and restore the values of caring and community to our healthcare system. 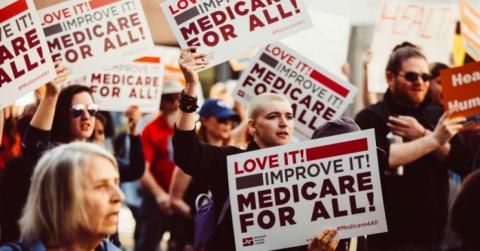 With the explosive growth of the movement for single payer healthcare, it should not be a surprise to see the Empire Strike Back.

With the explosive growth of the movement for single payer healthcare, it should not be a surprise to see the Empire Strike Back.

In the name of political reality, some liberal pundits, politicians and policy wonks are scolding progressives to give up on Medicare for All. There are many ways to achieve "universal coverage," we're told. "Overhauling" the entire system is too hard, healthcare is too big a part of the economy, and politicians will not take out the health insurance companies.

Yet, the alternative approaches to reform pose the same political problems: the insurance industry is likely to fight the elimination of their profits (Dutch and German health insurers, for example, are non-profit), and the severe reductions in executive compensation, elimination of shareholder dividends, and rate setting, all of which go away under European-style health insurance.  The benefits and rates are government mandated, the companies are essentially payment administrators.

Either this regulated system of private health plans lowers prices through government—by setting rates and negotiations—or it fails to do so and costs shift to individuals.  But it is still the government role as rate setter/price negotiator that matters. Wouldn't it be more straightforward and simpler to improve and expand Medicare?

Still, the pundits say it's best to search for incremental reform of the insurance-based system, and live (or not!) with the results. In other words, the best health reform we can do is a version of what we have. Worse, it props up and reinforces a profit-focused system that is antithetical to the very concept of healing. Advocates of Medicare for all, and other non-reformist reforms, are looking to solve problems immediately, not accommodating the status quo.

Progressives are badly served by shallow political advice from the likes of Paul Krugman. It obscures the reality working people actually face and undermines the fight for our values and program.

Our health is not a commodity—it doesn't belong in the "market"—it is a human right. Those who advise us to settle for models of national health systems in other countries are missing the fundamental difference from the broken U.S. scheme. What Australia, the Netherlands and Switzerland all have in common is they do not conflate "coverage" with healthcare. Those countries guarantee healthcare.

Having health insurance in America doesn't prevent medical bankruptcy or denied care. In the U.S., employer based healthcare creates great uncertainty for workers, as premiums and out of pocket costs increase, reflecting costs shifted from the company to workers to fund the profits of the insurance companies.

Only 55 percent of employers offer coverage. Why would we try to buttress a system that is failing workers, hurting business, and shrinking? From 60 to 70 percent of healthcare spending comes from taxes. We're just not getting our monies worth. We are wasting 20 cents on the dollar when we pay for private health insurance, wasting huge resources that could go to higher wages, child care, and pensions.

Alternatively, single payer is the reform that establishes health security and enables greater equality and freedom—values worth fighting for.

Ironically, healthcare reform efforts have sought to "improve and expand" every element of the present system, except the program that is popular and works best: Medicare. The Clintons tried to expand HMOs, Obama expanded private health insurance and Medicaid, the GOP tried to expand "individual purchase," so we'd all be on our own when dealing with insurance companies, drug companies and hospital corporations.

It is precisely profit-focused healthcare industry that has caused the problems of escalating costs and restricted access. Rising premiums pay for rising prescription drug costs, which hospital corporations pass on to patients and drive up their own rates as they leverage their market share. As a result, each sector's revenues and profits increase. The industry imperative of revenue and profits has replaced caregiving as the basis of healthcare in the US (see Elizabeth Rosenthal’s book, "American Sickness.")

We are not "starting from scratch," as Krugman contends (which he did not in 2005) but instead there exists a model in the U.S. for how single-payer financing could work: Medicare—which if improved and expanded to all—could confront the industry, contain prices and restore the values of caring, compassion and community to our healthcare system.

Alternative approaches to universal coverage (though even with the Affordable Care Act, 28 million people remain uninsured) depend on using huge tax subsidies to enable individuals and businesses to buy insurance coverage. Without those subsidies—in California alone they amount to over $100 billion—health insurance is a failed business model. Taxpayers prop up the insurers profits for the honor of paying $2000 in deductibles and potentially under the ACA over 9.5 percent of our income in out of pocket costs. In California, this means 15 million people are uninsured or underinsured.

Truly controlling costs requires eliminating the waste and inefficiency of the private payers – Medicare administrations are cost 4-5 percent compared to up to 12 percent for insurance companies (before profits). The inherently wasteful insurance company bureaucracy doesn't go away when everybody has to buy one of their health plans.

Ultimately, what we must face is an issue of power. Can we collectively organize a healthcare system without the imperatives of revenue and profit? Only if we build a movement for health justice that demands guaranteed healthcare for all as a human right. Only collectively through government do we as a society have the resources and standing to secure that right. Only through an Improved Medicare for All can we achieve health security, not subject to the market power of healthcare corporations.

Michael Lighty is the Director of Public Policy for National Nurses United, where he has worked since its founding in 2009, and for the California Nurses Association since 1994. Follow him on Twitter: @mlighty60