I Went to Counterprotest Neo-Nazis in Charlottesville. I Witnessed Carnage

Make no mistake about it: What we observed was an act of terror. This brutality was designed to intimidate people of color, such as myself, as well as to intimidate the many courageous people who were in Charlottesville opposing white supremacy in full force. The goal was to place a high cost on protesting white supremacy and to frighten people away from standing up for their rights. 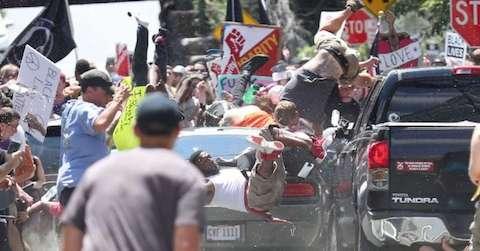 When I attended the counterprotest in Charlottesville on Saturday, I thought of my family. I come from about as diverse a background as one could imagine. My father was born in Puerto Rico, and my mother is a New Yorker of Italian descent. My parents are deaf. Being raised by deaf parents has always given me a deep sense of responsibility to help those in my community who cannot help themselves. I also thought of my friends. I thought of my fellow Democratic Socialists and other comrades who had turned out to counterprotest with me. I thought about a lot. But most importantly, I thought about all the friends and activists across the country who could not be there: people locked in jails for petty crimes, trapped in detention centers for fleeing violence in their homelands or otherwise silenced by hate because of the way they look, the way they think or the people they love.

I am a dark-skinned Latino living in a rural town in Virginia. I’ve been politically active since I was 16, and I care about the marginalized and vulnerable people (many of them people of color) who live in my area. When I considered counterprotesting the white supremacist rally in Charlottesville, I thought of it like this: When we do not oppose Nazi hatred, we put people of color in even moredanger, by allowing dangerous bigots to appear dominant and unopposed. It is with that in mind that my friends and I, numbering at least 60, all left the rooftops of the Water Street garage in an optimistic but cautious mood Saturday morning. We knew the risks, but we knew they were necessary.

Richard Spencer, along with a who’s who of white supremacists, had chosen Charlottesville as the location for their march to protest attempts by the City Council to take down Confederate monuments. We saw trucks carrying skinheads drive by us as we marched out of the parking garage. As soon as we entered the downtown mall, we were met with tear gas and were forced to gather at a location that provided us a good vantage point as the neo-Nazis marched by shouting expletives at us. They held their ridiculous-looking shields and wore their swastika armbands, with many either wearing all white or dressed in what appeared to be riot gear. As they continued to march past us, not a single neo-Nazi wasted an opportunity to throw a “Heil Hitler!” salute in the direction of our big red flags. Spencer even walked by us at one point, and we made sure he was aware of our displeasure.

Being dark-skinned in a sea of neo-Nazi marchers is an oddly empowering feeling. I had heard reports throughout the day of people of color being cornered and beaten, and I knew that I would be a target because of the color of my skin—but that was nothing new; I have been a target for the color of my skin my entire life. At least in this situation, I was taking a stand and resisting the neo-Nazi effort to eradicate people like me by my very presence at the site. So, at first, I had no fear. I knew that my comrades were there and that we were united.

As we marched throughout the city, we were greeted with cheers from locals, Black Lives Matter activists, Industrial Workers of the World members, Showing Up for Racial Justice members—every possible equal rights group one could imagine. Seeing the locals cheer on our Democratic Socialists of America contingent was one of the most inspiring moments of my life and certainly one that I will never forget. But these uplifting moments were quickly followed with some of the worst, most terrifying moments of my entire life.

Various activists had formed a strong impromptu coalition with many other groups at Justice Park. We had received a tip that the far right was heading to a public housing neighborhood to terrorize the community. But en route to the neighborhood, we were asked to go back: The community had defended itself. We converged with another massive march and began to move down a boulevard.

A vehicle going about 40 mph swerved in front of us, careening into the antiracist marchers. The noise was deafening. Bodies went flying. Screams and wails were heard from every corner as a stampede of people erupted. As I and the other DSA marshals appealed for calm from the crowd, I heard people say that a bomb had gone off, or that shots had rung out, but ultimately we realized that we had witnessed an act of domestic terrorism.

Make no mistake about it: This was an act of terror. This brutality was designed to intimidate people of color, such as myself, as well as to intimidate the many courageous people who were in Charlottesville opposing white supremacy in full force. The goal was to place a high cost on protesting white supremacy and to frighten people away from standing up for their rights.

I will never forget the sound of those bodies being hit by that car. But I won’t be intimidated, and neither will the enormous movement of people opposed to the virulent racism represented by Spencer and his crew. The incredible folks at the DSA Veterans Working Group have raised nearly $100,000 for the victims of the terrorist act, and vigils are being planned across the country for the woman who was killed.

President Trump might claim that there was violence from “many sides” in Charlottesville, drawing a parallel between white nationalist terrorism and antiracist protest. But I was there. And there is no parallel. We will continue organizing and demonstrating against white supremacy that manifests as terrorism and white supremacy that manifests in subtler, more insidious ways. And white supremacists will continue to wage a violent war against equality, while Trump refuses to label the nature of their crimes.

Austin Gonzalez was born in Richmond of Puerto Rican descent, and is currently chair of the Richmond chapter of the Democratic Socialists of America.