The United States Was Never Immune to Fascism. Not Then, Not Now. 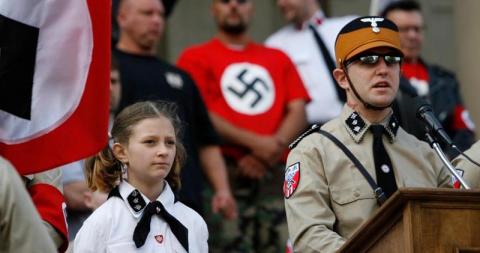 America is currently experiencing a wave of increasingly aggressive far-right and neo-fascist activism. Observers have routinely considered fascism an ideology alien to American society. Yet it has deeper roots in American history than most of us have been willing to acknowledge.

Consider the interwar period. The crisis years of the 1920s and 1930s not only gave rise to fascist movements across Europe – a moment captured in Ernst Nolte’s classic The Three Faces of Fascism – but around the globe. The United States was no exception.

Across the country, fascist and proto-fascist groups sprang up. The most prominent among them was the paramilitary Silver Shirts movement, founded by William Dudley Pelley, a radical journalist from Massachusetts, in 1933.

Obsessed with fantasies about a Jewish-Communist world conspiracy and fears about an African American corruption of American culture, its followers promoted racism, extreme nationalism, violence and the ideal of an aggressive masculinity. They competed against various other militant fringe groups, from the Khaki Shirt movement, which aimed to build a paramilitary force of army veterans to stage a coup, to the paramilitary Black Legion, feared for its assassinations, bombings and acts of arson.

An important role in this history was played by radicalized parts of the Italian and German American community. Inspired by the ascent of Mussolini, some Italian Americans founded numerous fascist groups, which were eventually united under the Fascist League of North America.

Many commentators still feel uneasy speaking about fascism in America. They consider fascism to be foreign to US society

Even bigger was Fritz Julius Kuhn’s German-American Bund, founded in 1936. Its members considered themselves patriotic Americans. At their meetings the American flag stood beside the Swastika banner. At a rally at Madison Square Garden in New York on 20 February 1939, a crowd of 20,000 listened to Kuhn attacking President Franklin D Roosevelt, referring to him as “Frank D Rosenfeld” and calling his New Deal a “Jew Deal”.

The gathering ended in violent clashes between protesters and participants. Similar riots took place on the west coast. The New York Times reported: “Disorders attendant upon Nazi rallies in New York and Los Angeles this week again focused attention upon the Nazi movement in the United States and inspired conjectures as to its strength and influence.”

To be sure, most of these groups were peripheral. And yet historians have shown that the appeal of fascism among many Americans in the interwar years should not be underestimated. The ideology found prominent supporters, from the writer Ezra Pound, who from Italy called Americans for an alliance with Mussolini, to the aviator Charles Lindbergh, who in the 1940s campaigned against Washington’s entry into the war.

Fascist agitators published widely circulated newspapers and aired radio shows, which reached millions, preaching virulent antisemitism, nativism and anti-Communism. Many of them had no obvious links to their fascist counterparts in Europe and cushioned their message with American nativism and Christian piety.

“When and if fascism comes to America it will not be labelled ‘made in Germany’; it will not be marked with a swastika,” a US reporter warned urgently in 1938. “It will not even be called fascism; it will be called, of course, ‘Americanism’.” Sinclair Lewis’s novel It Can’t Happen Here, published a few years earlier, had made a similar point.

During the second world war, American fascists suffered a serious blow. At the great sedition trial of 1944, some of the movement’s key proponents were charged with treason. In the postwar years, however, scores of new groups emerged. Some saw themselves in the tradition of the interwar period, such as the American Nazi party, founded in 1959 by the flamboyant war veteran George Lincoln Rockwell, which copied its ideology and iconography from Germany’s Nazi party.

White nationalist and neo-fascist movements in the US have grown by 600% on social media, outperforming Isis

Yet many of these groups transformed and began to look very different from their predecessors of the 1930s. Not all wore jackboots, armbands and uniforms any more. Not all assembled at torch rallies. They embraced new discourses of globalization, migration and multiculturalism. Today, neo-fascism has many faces, with movements ranging from neo-Nazis to neo-Confederates to segments of the alt-right.

The United States has never been immune to fascism. But many commentators still feel uneasy speaking about fascism in America. They still consider fascism to be foreign to American society. They often assume that American exceptionalism makes the country immune to any fascist threat. Fascism has no place in our master narrative of American history. Conversely, in most global histories of fascism, America is no more than a footnote.

And yet it has never been more important to acknowledge the history of fascism and neo-fascism in America than it is today. Over the last five years, according to a recent study by George Washington University, white nationalist and neo-fascist movements in the US have grown by 600% on Twitter, outperforming Isis in nearly every category, from follower numbers to numbers of tweets.

Although they remain fringe groups, Trump’s victory has given them new confidence. Never in history have they felt more empowered. Many of them saw his election as their victory. The chorus of support ranges from the American Nazi party supremo, Rocky Suhayda, who sees Trump as a “real opportunity”, to the white supremacist leader David Duke, who said he was “100% behind” Trump.

Trump has long done little to distance himself from these groups. In fact, he has all too often shamelessly tapped into their discourses, using dog-whistles, and continues to maintain a tacit, though increasingly shaky, alliance with them.

More than a decade ago, the historian Robert Paxton, well versed in the long history of fascism and neo-fascism in America, warned in his important book The Anatomy of Fascism about the “catastrophic setbacks and polarization” which “the United States would have to suffer” if “these fringe groups” were “to find powerful allies and enter the mainstream” of American politics.

His words may turn out to be prophetic.

Unlike many news organisations, The Guardian hasn’t put up a paywall – we want to keep our journalism as open as we can. So you can see why we need to ask for your help. The Guardian’s independent, investigative journalism takes a lot of time, money and hard work to produce. But we do it because we believe our perspective matters – because it might well be your perspective, too.  If everyone who reads our reporting, who likes it, helps to support it, our future would be much more secure.
Become a supporter.    Make a contribution.