Why are the Crucial Questions About Hurricane Harvey Not Being Asked?

This is a manmade climate-related disaster. To ignore this ensures our greatest challenge goes unanswered and helps push the world towards catastrophe. Not talking about climate change, and Trump's active attacks on climate science is missing a huge, crucial moment to address an enormous problem. 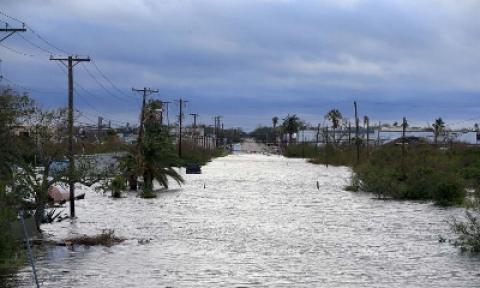 I realize climate science is complex and sometimes hard to talk about, so I wanted to share some resources and examples of how you can soundly connect the dots.

A few things I've found helpful in this kind of storytelling:

Be specific. July 2017 was the hottest month measured on earth. The temperatures in the Gulf of Mexico were several degrees hotter than they should be. The waters in the Gulf have risen between 6 in and 1 foot already. These are all contributing factors that can ground the story about the climate impacts on the storm.

Talk about effects, not causes. It's not useful to debate whether Harvey was 'caused' by climate change. What you can say is that climate change made Harvey into a monster -- bringing more rain, more storm surge, and more flooding. These are real manifestations of the problem.

Connect to the human level. The fossil fuel industry's agenda and climate denial have put millions of people in harm's way. Talk about how there are homes that would not be under water today without the effects of carbon pollution and the steadfast denial of the need to act -- because there are more lives hanging in the balance of what we do next.

Connect with specific communities. Climate change -- and Harvey in particular -- will impact the poor, people of color and other vulnerable communities disproportionately hard. There are huge refineries that are spewing toxins into the air and water, and they are almost all located near poor neighborhoods. ICE was keeping checkpoints up ahead of the storm, and the fear of deportation is keeping people out of shelters. These are crucial parts of the story that ground the impacts in real lived experience.

Here is 350 trying to apply some of these things in a blog post.

Here's why it's so important that you talk about climate change right now:

Until our leaders reckon with the problem, by way of pressure from us, we will be building and re-building in harm's way. Climate denial puts lives at risk: there is a train coming towards us, and we need to both stop it, and get people off the tracks before it starts to slow down.

The problem is, the train is invisible, and most people forget it's there. The windows to talk about climate change concretely can be vanishingly small, and when a moment like this emerges, it is doing an active disservice to the people at risk to ignore it.

Needless to say, I really agree with Naomi Klein on this one.

Here are some resources about the specific connections with Harvey:

The Climate Signals guide on Harvey is a very strong starting point: http://www.climatesignals.org/headlines/events/tropical-storm-harvey-2017

As is scientist Michael Mann's op-ed in the Guardian: https://www.theguardian.com/commentisfree/2017/aug/28/climate-change-hurricane-harvey-more-deadly

Here's a review of the hurricanes and climate change debate in the Washington Post: https://www.washingtonpost.com/news/energy-environment/wp/2017/08/30/katrina-sandy-harvey-the-debate-over-climate-and-hurricanes-is-getting-louder-and-louder/

If you're worried about how to talk about this or want to figure out how to do it more, I'm happy to discuss, or find a way to connect you with other orgs and resources.

We are living on a hotter planet and that will spin out many more storms like Harvey, or the monsoons in South Asia or the flash floods in Yemen. The sooner we talk about it fearlessly and effectively, the fewer people will have to go through the nightmare unfolding on the Gulf right now.