Complaining About Hillary's Campaign Book Is a Huge Waste of the Progressive Movement's Time. Why aren't they focusing on the anti-democratic practices that split the Democratic Party? 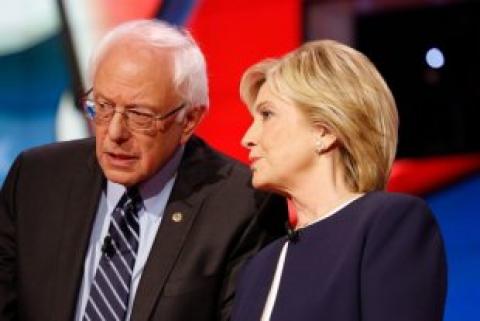 Hillary Clinton’s book tour for What Happened officially starts next week, but already it has prompted mounting coverage fanning the Democratic Party’s unhealed Hillary-Bernie split from 2016.

There is a larger takeaway, however, that should rattle Democrats as they look ahead. Their party remains leaderless—or at the very least, its leaders are not doing much to heal the cause of those splits, so they could easily be provoked today.

Instead, Democrats and progressives are mostly getting woe-is-us coverage. Take one Politico.com report this week, which noted every Democrat they reached groaned, ducked or evaded commenting about its chosen excerpt, in which Hillary blamed Bernie for her loss.

“Oh God,” “I can’t handle it,” “the final torture,” were former campaign staff comments. Reporters, who are supposed to know better and cover serious issues, also griped about “yet another return to the campaign that will never end.”

All of this rue is missing a critical point. The Democrats have not faced their party's behaviors that split their base in 2016. These cut as deeply as the philosophical divide pitting its we-hate-corporations left against its we-work-with-corporations centrists.

If Democrats are going to get past the Hillary-Bernie divide, it's not just a matter of looking ahead, as Sanders counseled. The party has to create a path where its factions can fairly compete for top posts and nominations, win and lose alternatively, and go on to fight another day. That hasn’t happened. Instead, as seen in most Clinton book coverage, old wounds are resurfacing.

What’s missing is leadership that prioritizes making the party more democratic—as exemplfied by making its elections and voting fairer. After 2016, a DNC unity commission was created to address issues Sanders raised, from party rules to its political agenda. So far, that panel has not signaled that change is coming. The DNC's super-delegate system to choose its presidential nominee remains. Some state parties, like in California, use a similar system, which contributed to a Berniecrat candidate for state party chair losing a close race after insider appointees, not elected delegates, voted. The California contest ended in a lawsuit.

Other anti-democratic features remain. Key state parties, like in Iowa and Nevada, are still wedded to their ineptly run caucuses, where among other things, popular vote totals are not released. Not every state holding a primary, like New York, allows independents to vote for its candidates. Last winter, when running for DNC executive director, Tom Perez said the party “rigged” the nomination for Clinton, words he was forced to retract. The party that publicly poses as the defender of voting rights hasn't fixed its rigged terrain.

Democrats are not taking a hard look in this mirror, but if they did they might save the party from itself. What’s missing is a way forward, starting with more democratic practices inside the party. That's what's missing in the What Happenedcoverage.

Some pieces, such as a Thomas B. Edsall analysis in the New York Times, hint at this underlying tension and its ongoing impacts. He notes how 2016’s shadow includes ongoing fights between Bernie and the DNC “over such matters as control of valuable donor lists and demands for a more progressive agenda.”

But Edsall also throws fuel on the fires dividing the party.

“There is good evidence that defections by Sanders’ Democratic primary voters on Nov. 8 played a decisive role in Trump’s victory," he wrote this week, citing the Cooperative Congressional Election Study, the most comprehensive post-election study in the nation. He extensively quoted Nina Turner, the former Ohio state senator who is now president of Sanders’ offshoot, Our Revolution. In August, Turner bluntly described the DNC “as ‘dictatorial,’ ‘arrogant,’ ‘pompous,’ ‘superficial,’ ‘tone-deaf,’ ‘tone-dead,’ ‘out of line,’ ‘insulting’ and ‘absolutely insulting.’”

Every faction is afllicted and aggrieved, but what can be done to bridge these divides? There may be no such thing as a united Democratic Party anymore, just as there seems to be no such thing as a united Republican Party. But in our system of government, we still need majorities and super-majorities to pass laws and veto legislation. That means the Democrats and the progressives will not be able to win and govern unless they can find new ways to work together.

What's needed is the kind of leadership that's not in evidence. Chuck Schumer and Nancy Pelosi sitting down with Trump and getting a deal this week to outfox GOP leaders on extending the federal debt is a parliamentary victory. But it is not party-healing leadership. Democrats have been more united than the Republicans in 2017, but it is easier to play defense than offense. While congressional Democrats have moved left (seen this week in uniformly defending DACA, whereas a decade ago they weren’t as pro-immigrant, including Sanders), the party is easily provoked into rekindling old fights.

What seems to be the status quo are deepening silos, left and center.

Does anyone remember this past summer’s “A Better Deal” press conference where Schumer, Pelosi and others laid out a more populist economic agenda as their template for 2018? That hasn’t become a bandwagon. Meanwhile, Sanders' upcoming “Medicare for All” legislation, to be released next week, has become a litmus test on the left.

Early press coverage of Clinton’s book shows it is easier to rekindle party tribalism. But it doesn't bode well for 2018 and 2020. One can only wonder what might happen if the DNC faced up to the anti-democratic features that deepened the Sanders-Clinton divide in 2016. Barring that reckoning, deals between Trump, Schumer and Pelosi may be the best the party can do.

Steven Rosenfeld covers national political issues for AlterNet, including America's democracy and voting rights. He is the author of several books on elections and the co-author of (AlterNet eBook, 2016).