Suspicion and frustration grow as Hurricane Irma evacuees find themselves unable to return home to Barbuda, whilst a law protecting the island from private and foreign investment is dismantled. 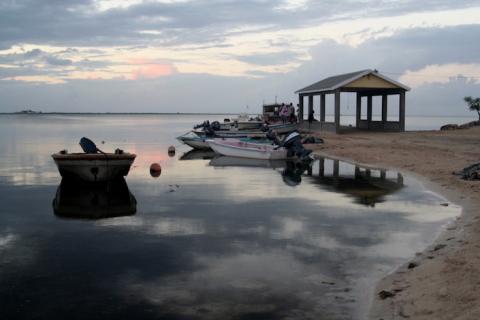 On Wednesday, 6 September 2017, Barbuda, the less known sister isle of the popular resort island of Antigua, bore the full brunt of Hurricane Irma as it struck the Leeward Islands of the Eastern Caribbean. The island suffered near total destruction: 95% of the island’s buildings were damaged, 60% of the population were rendered homeless, and a 2-year-old child was tragically killed. Antigua, on the older hand, was relatively untouched.

Visiting the island after the winds died down, the prime minister of Antigua and Barbuda Gaston Brown received wide acclaim for deciding to evacuate the island before the fast-approaching hurricane Jose had the chance to make landfall as well. Dozens of vessels were involved in a frantic effort to transport nearly 1800 people from Barbuda to shelters on Antigua. Thankfully Jose changed course, turning north at the last minute and missing Barbuda, Antigua and the other Leeward Islands.

Meanwhile offers of help began to flood in from around the world. Skilled electricians, plumbers, builders, and carpenters from the Barbudan diaspora as well as individuals from England, Scotland, the US and Canada offered, even at their own expense, to travel to Barbuda and assist with the rebuilding efforts. Yet in Antigua these offers of support were largely ignored. Crates of aid were redirected to other Caribbean islands, and all independent efforts by Barbudan communities were blocked by the Antiguan authorities, who preferred to organise the relief efforts directly.

At the same time, a long list of wealthy private individuals and sympathetic national governments pledged their support for rebuilding of the island. Within days, even Brown announced during a special sitting of parliament that he was making 100,000 East Caribbean Dollars (£27,400) of his own money available for the rehabilitation of the island.

And then the other penny dropped

On 11 September, Brown used a public consultation to announce access restrictions on islanders wanting to return to Barbuda. Depending on the availability of ferries and transport to and from the island, trips would be organised twice a week for a couple of hours until the work to clear and rebuild Barbuda’s infrastructure could be completed. This announcement was met with dismay given growing concern about personal possessions, animals and livestock that were left on the island, but was justified citing health and safety concerns.

The following morning, a short article appeared in the Antigua Observer stating that Brown intends to make controversial changes to a historical law governing land distribution on Barbuda. This closed-doors decision to alter the 2007 Barbuda Land Act and end communal ownership of land opens the door for private and foreign land ownership. This law originates from an unofficial tenure system established following the islanders’ emancipation from slavery, whereby land acquired would be handed down to descendants and bush land would be held in commonage. This freedom was challenged multiple times in the years after emancipation, but against all odds survived through to independence in 1981.

Barbudans have continued to defend the commons, but the statute has been repeatedly and bitterly contested by the twin island state during the post-independence period. The tradition of common land is deeply engrained in Barbudan culture and many islanders fear that without it, beaches and land would be taken over for foreign-owned and run hotels, restaurants, casinos, and bars. Worse still, offshore tax-efficient investment companies could also become a presence in Barbuda, as has been the case in other Caribbean islands. These types of development are already prevalent in Antigua, a fact which no doubt influenced Antigua’s recent upgrade from a less to more economically developed nation.

The tradition of common land is deeply engrained in Barbudan culture.

Barbuda’s communications and transport infrastructure, in contrast, has long been neglected by the central government. In comparison with Antigua, Barbudas’ economy consisted – we must now speak in the past tense – only of a handful of luxury hotels, a sand mining export business, light agriculture mainly consisting of fisheries, and the public and service sector. Politically, however, and due in part to its common land laws, Barbuda commanded a strong democratic voice in relation to proposed and future development on the island. The Barbuda Council had a history and strong reputation of reviewing, vetting, and successfully halting foreign and private developments. Interesting then, that this lack of investment from central government might correlate with Barbudas’ resistance against such types of developments.

Nonetheless, this recent run of traumatic events is developing into a perfect storm: an entire population is now housed in temporary shelter, reliant on the authorities for everything, and restricted in their access to their homes. By allowing an opportunistic Antiguan government the momentum to force this change past a traumatised community in its most vulnerable moment, the core freedom secured by those emancipated from slavery, successfully defended and passed down through generations, is under serious threat.

The timing of these events is pivotal. The Antiguan authorities are using the plight of Barbudan survivors, and their desire to return home, as leverage to end a nearly 200-year-old deadlock over land rights on the sister isle. If they succeed, they will end a unique situation where developments and investments are subject to scrutiny by the Barbudan people before being allowed to go ahead.

Of course, a huge and costly effort to rebuild properties, buildings and infrastructure on Barbuda is urgently required. However there should be no need to change the fundamental governance of the island to achieve this, and in doing so remove a little known but valuable freedom secured by Barbudans’ as part of their emancipation from slavery.

The true cost of such a move would not only dispossess an entire community of people in their most desperate hour of need, but would also change the culture, economy, and environment of one of the few places in the Caribbean where ordinary people are protected from the savagery of a neoliberal world order. Perhaps authorities should instead embrace Barbuda’s unique history and situation, and use it as an opportunity in its effort to rebuild the island sustainably.

A masters graduate from the University of Liverpool, Tim George works as an Assistant Vice President in Litigation Support in Birmingham, UK. The proud son of a Barbudan mother, he is currently fundraising to provide aid to displaced families affected by Hurricane Irma.