There is a wall in baseball between sports and politics. One player just put a crack in it. Fall - Baseball - League Championships - World Series - what makes baseball different from other sports, like football, basketball and soccer? 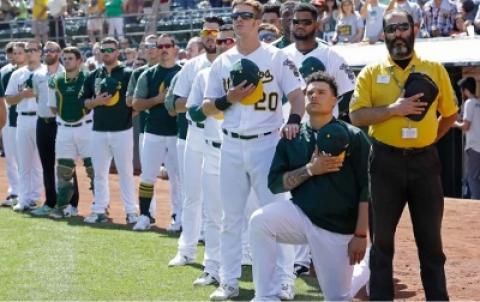 About a decade ago, I had the great honor of interviewing the late South African poet, freedom fighter, and sports activist Dennis Brutus. He told me the story of coming to the United States in the later 1960s and attempting to enlist Major League Baseball players in the fight against apartheid. Though he reached out through every conceivable contact, the only person who would meet with him was iconoclastic pitcher Jim Bouton. Brutus was stunned. Forty years later, he looked at me and asked, “What is the deal with baseball?”

Fast forward to today: As NFL and NBA as players are embroiled in a political fight with Trump over his racism and their rights to free speech, all had been quiet on the baseball front. Until now.

…I love this country. I’ve had plenty of family members, including my father, that have bled for this country…. My hand over my heart symbolized the fact that I am and forever will be an American citizen and I’m more than grateful for being here. But my kneeling is what’s getting the attention, because I’m kneeling for the people who don’t have a voice. This goes beyond the black community. This goes beyond the Hispanic community. Because right now we’re having an indifference and a racial divide in all types of people. It’s being practiced from the highest power we have in this country, and it’s basically saying that it’s OK to treat people differently.

It was a brave move, and it’s been supported by the fans in Oakland. (As with Colin Kaepernick in San Francisco last season, I find myself grateful for Bay Area sports fans.)

It’s worth asking why baseball has been behind other sports. Some of the surprise over MLB players’ reticence to protest is rooted in a misreading of baseball history. Because of icons like Jackie Robinson and Roberto Clemente (and, less so, another social-justice icon, Curt Flood), the sport has always had a superficial patina of progressiveness. But baseball has always been a conservative sport.

Jackie Robinson was a giant, and his tenacity in breaking another of baseball’s “color line” is the stuff of cinematic legend. But he was hardly swimming in solidarity. New York Post writer Jimmy Cannon observed Robinson in the dugout and called him “the loneliest man I’ve ever seen in sports.” Roberto Clemente and Curt Flood, in much more politically charged times, also stood apart. When Carlos Delgado engaged in his own anthem protests during the Iraq War, the Mets would sign him only if he promised to stop. And he did.

As Rays pitcher Chris Archer explained, “ I think mainly because the other sports that do that are predominantly black. Our sport isn’t, so I think the criticism might be a little more harsh. It took somebody really special [Maxwell] that had a unique background to take that leap.”

Archer subtly raises the issue of retaliation. The traditionalist norms that bit Jackie Robinson are still in place, impacting players today. I reached out to baseball scribe and senior writer for CBS sports Jonah Keri, who underlined that saying, “Baseball more than any other sport is a game obsessed with tradition and constancy. Any deviation from those norms—even bunting during a no-hitter, let alone protesting during the anthem—can and will be viewed disdainfully.”

Or as Sports Illustrated’s baseball editor Emma Spanrelayed to me:

Even something as innocuous as bat-flipping or wearing your cap to one side can provoke some pushback in this sport. In MLB you never want to be considered ‘a distraction’ or draw a lot of media attention for anything besides your play on the field or maybe some very noncontroversial charity work. So there’s a real conformist streak, and even though that’s been challenged plenty of times over the years by plenty of players, it’s still very much there. To kneel during the anthem, whatever the cause, would draw a ton of attention and controversy, and that’s a tough sell in baseball regardless of what the cause is.

Baseball of course has many players of color from Latin America, the Caribbean, and Japan. But as freelance sports writer Britni de la Cretaz, wrote to me, “Can you imagine the optics of a Latino player from outside the U.S. ‘protesting the flag’? It’s a non-starter. This leaves less room for visible solidarity among players of color as a whole.”

Yet someone had to be first, and that was Bruce Maxwell. He has said that he will continue his protests as the A’s travel to Texas, telling the San Francisco Chronicle, “My concerns are very little. Anywhere, I’m going to have differences. I grew up in Alabama. I might get more boos than cheers. It’s nothing I’m not used to.” He also, in a statement that would have made Dennis Brutus smile, referenced Nelson Mandela, saying, “Nelson Mandela said sports has a way of uniting the country, unlike any other government or power can do. Right now, that’s what’s showing. Guys from all over the world are starting to stand up for the equality of man in general and not just a single race.”

There is a beautiful symmetry to the fact that, after Trump’s ranting in Huntsville, it is a player raised in Alabama taking him to task. It is also important, as the NFL “protests” descend into abstract mush, to have one player state clearly why he is taking the knee. Bruce Maxwell is breaking baseball’s “politics line.” Let’s make sure that he does not become “the loneliest man” in sports.