The Medicare Drug Price Negotiation Act of 2017 would finally allow the government to negotiate directly with drug companies to lower prices for Medicare beneficiaries, much like the VA and Medicaid do today. 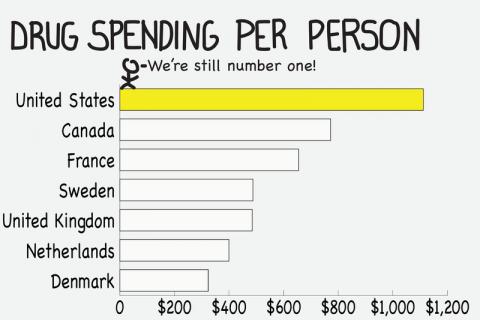 Ranking Member Cummings:  “Before and after the election, President Trump said over and over again that drug companies were ‘getting away with murder’ and that he wanted to give the government authority to negotiate lower drug prices. That’s what our bill does. I know there have been a lot of distractions with the President—a LOT of distractions. But this is what the American people want us to be working on.  They are sick of the tweeting, the insults, the infighting, and all the rest of it. They want us to work together to lower drug prices, and they want action now. We are doing our part. We hope President Trump will do his.”

Senator Sanders: “While drug corporations make extraordinary profits, our people are dying and becoming sicker than they should because of outrageously high prices for the medicine that they need. This is unacceptable. It’s time for President Trump to follow through on his promises to the American people. We must join the rest of the industrialized world by implementing prescription drug policies that work for everybody, not just the CEOs of the pharmaceutical industry.”

Rep. Doggett: “Drug pricing in America is a tangled mess, a knot that will take more than one cut to pull apart. Harnessing the purchasing power of Medicare and negotiating better deals for drugs through a process similar to that already available for our veterans is a significant first cut at the knot. Sick patients are sick and tired of seeing Congress do nothing about a problem that affects so many.”

Rep. Welch: “Putting the federal government's purchasing power to work to save seniors and the taxpayer money is simply common sense. The fact that we continue to pay retail rates for wholesale purchases is a ridiculous. It's long past time we put an end this sweetheart deal for big Pharma. If President Trump is serious about his support for this proposal, I’m ready to work with him to provide urgently needed relief to consumers and taxpayers.”

President Trump has warned that the pharmaceutical industry is “getting away with murder,” has criticized“outrageous” drug prices, and has pledged to create a “fair and competitive bidding process” that would result in prices “coming way, way, way down.”  As recently as last week, he acknowledged again that “massive” spending and lobbying by the pharmaceutical industry have driven drug prices “through the roof.”

The Medicare Drug Price Negotiation Act of 2017 would finally turn this rhetoric into law by allowing the government to negotiate directly with drug companies to lower prices for Medicare beneficiaries, much like the VA and Medicaid do today.

Current law prohibits the Secretary of HHS from negotiating directly for lower prices in Medicare, even though Medicare paid for 29% of retail drug costs in 2015.  Since Medicaid and VA are allowed to negotiate, Medicare Part D pays, on average, 73% more than Medicaid and 80% more than VA for brand-name drugs.  The federal government could save between $15.2 billion and $16 billion a year if Medicare Part D paid the same prices as Medicaid or VA.

The legislation would leverage the purchasing power of the government by using formularies to enhance competition and establish a fallback price—based on what other federal agencies and foreign countries pay—to kick in automatically if negotiations are unsuccessful. It also would preserve critical protections for patient access and strengthen patient appeals processes for Part D plans.

Finally, the legislation would restore rebates on drugs covered under Part D for low-income beneficiaries, which were eliminated when Part D was created.  According to the Congressional Budget Office, restoring these rebates for brand-name drugs alone would save taxpayers $145 billion over ten years.