Ending the medical tax break could be a ‘gut punch’ to the majority of the country. Eliminating the medical-expense deduction would end a source of relief that has helped millions of people cope with steep medical costs in a country without comprehensive, universal health coverage. 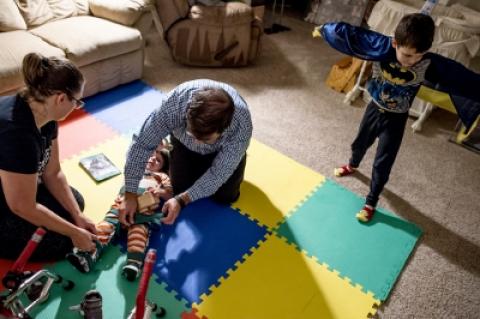 Jackson Witzler was born with a defect that requires continuing care. His family says that being able to deduct unreimbursed medical expenses is the difference between Jackson getting treatment now and needing more services later in life.,Credit: Justin Gilliland for The New York Times

Suzanne Hollack tried to care for her husband at home after he was diagnosed with frontotemporal dementia at age 69. But it got to the point where she couldn’t take a shower for fear he would stray out of the house.

So 18 months ago, she moved him to a memory care community near their home in Scottsdale, Az., which like most long-term care, is not covered by Medicare. That, plus his other medical expenses, cost the couple $90,000 last year.

The Republican tax overhaul bill introduced in the House last week would eliminate that deduction, which allows people who itemize their federal income taxes to deduct medical expenses that exceed 10 percent of their total income. The change is part of a broad effort to rewrite the tax code in a way that Republicans say will be simpler and fairer. But while the party has framed its tax plan as a boon for the middle class, eliminating the medical-expense deduction would hit the middle class squarely, eliminating a source of relief that has helped millions of people cope with steep medical costs in a country without comprehensive, universal health coverage.

Republicans say the deduction affects relatively few people — 8.8 million out of about 150 million taxpayers last year — and that the bill as a whole would benefit more families by lowering tax rates and increasing the standard deduction in lieu of itemizing.

“This bill helps Americans keep more of the money they earn for expenses that arise throughout their lives — such as medical bills — rather than providing a myriad of provisions that many Americans may only use once in their lifetimes, and only if they go through the hassle and frustration of itemizing,” said Lauren Aronson, a spokeswoman for the House Ways and Means committee.

According to an analysis in January from the Joint Committee on Taxation, most taxpayers who claim the deduction have incomes below $100,000, with about 40 percent below $75,000. More than half of those who claim it are older than 65, according to AARP, the lobby for older Americans. They often face staggering medical and long-term care costs.

The deduction also helps younger families struggling to pay the enormous cost of caring for children with chronic conditions or disabilities, and couples going through costly fertility treatments like in vitro fertilization. In interviews, some who claimed it said the deduction is the difference allowing them to afford mental health care, new chemotherapy drugs, or cancer surgeries by doctors who fall outside insurance networks.

“I understand that in order to get tax reform through there need to be some ‘pay fors,’ but getting those revenues from families who have been hardest hit by high cost medical conditions like autism or cancer seems a bit like targeting hurricane victims as a potential source of revenue,” said John Rodakis, 48, of Dallas, who has a son with autism and runs a nonprofit foundation devoted to autism research.

The Joint Committee estimated that the deduction for medical expenses would cost the federal government $10 billion next year, if it were not eliminated. That is far less than the two big deductions the Republican bill would preserve: one for interest paid on home mortgages is expected to cost $63.6 billion, and one for charitable donations, $47.8 billion. Most taxpayers claiming those deductions have incomes above $100,000.

Taxpayers claimed a total of $87 billion in medical costs through the deduction in 2015, according to the Internal Revenue Service. An increase in the standard deduction would not nearly make up for that, tax experts said. The average Medicare beneficiary, for example, pays $5,680 a year in out-of-pocket costs, according to AARP.

Last year Heather Block, 54, deducted $9,349 in medical expenses. For most of her career as a freelance international aid worker, she carried two health insurance policies. Before she got breast cancer six years ago, she said, “it wouldn’t have dawned on me that people had these medical expenses.”

Her cancer is now stage 4. One month this year, she said, oral chemotherapy alone was $4,000. “I feel like I’ve had a running contest since I got cancer,” she said, “Am I going to use up my savings and go bankrupt or am I going to die first?”

While the Affordable Care Act expanded coverage to millions more Americans and limited out-of-pocket costs, many, like Ms. Block, still face large expenses that insurance does not cover.

“It’s like a backstop, and until such time that we have a health care system that covers everybody for everything, we’re going to need that backstop,” said Alexandra Thornton, the senior director of tax policy at the liberal-leaning Center for American Progress. “That’s the thing with deductions, they recognize that sometimes people are in a situation where it’s harder to pay their taxes. Some are harder to defend, but this is one of the easier ones.”

Lisa and Peter Witzler’s second son, Jackson, was born with spina bifida, a defect caused when the spinal cord does not close in the womb. By his fifth month of life, he’d spent three months in the hospital — six weeks in neonatal intensive care — and his parents had spent the money they had planned to put toward day care.

Doctors had recommended private nursing because Jackson had severe sleep apnea and would repeatedly stop breathing and turn blue. But insurance would not cover it.

“We didn’t have that time to prepare or save for anything,” said Mr. Witzler, a union organizer.

The family, which lives in Montgomery Village, Md., had $25,000 in unreimbursed medical expenses last year. Being able to deduct those expenses, the Witzlers said, is the difference between their son getting treatment now, or needing more public services later in his life.

“It’s a misnomer,” said Ms. Witzler, who works for the federal government doing conflict resolution. “The idea that these are extra things, that it’s deducting things that are not essential or necessary.” 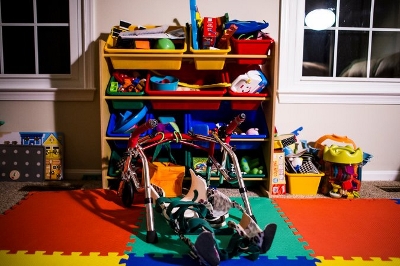 Jackson Witzler’s walker and braces. Jackson, now 2, was born with spina bifida. With all the care he has needed, he is a “job creator,” his father said.
Credit Justin Gilliland for The New York Times

Adrienne Lynch, who is 34 and lives in Austin, Tex., is undergoing in vitro fertilization for the second time this year. “We have spent around $43,586, and that won’t be the last of it for 2017,” she said. Ms. Lynch, who manages regional media advocacy for the American Cancer Society Cancer Action Network, said that the deduction, which would lower her taxable income by more than $20,000, would help rebuild the emergency savings that she and her husband have spent on fertility treatments this year.

“To go after this is a gut punch,” she said.

Robert Graboyes, a senior research fellow at the Mercatus Center at George Mason University, said the plan to eliminate the deduction was “part of a larger deal where one way you pay for broad tax cuts for a large part of the population is by ending a variety of small ones. My guess is they needed some revenue and this was a way to do it.”

But eliminating the deduction could hasten the speed at which some older Americans spend down their savings and have to go on Medicaid, a far greater expense for the federal government.

“Already I’m having to dip severely into whatever I’ve saved,” said Jennifer Clark, 76, of Falls Church, Va. She has multiple sclerosis and a form of blood cancer, and while insurance covers her chemotherapy and other medications, she pays out of pocket for part-time aides, dental care, a portion of her physical therapy, some of her medications and the continuing care retirement community she lives in.

“If I lose this and the ability to deduct my state income taxes,” Ms. Clark said, “we are talking wiped out.”