books A Devastating Indictment of How We Live Today

David Harvey seeks to renew our reading of Marx's Capital in the wake of capitalism's current multifaceted crisis. 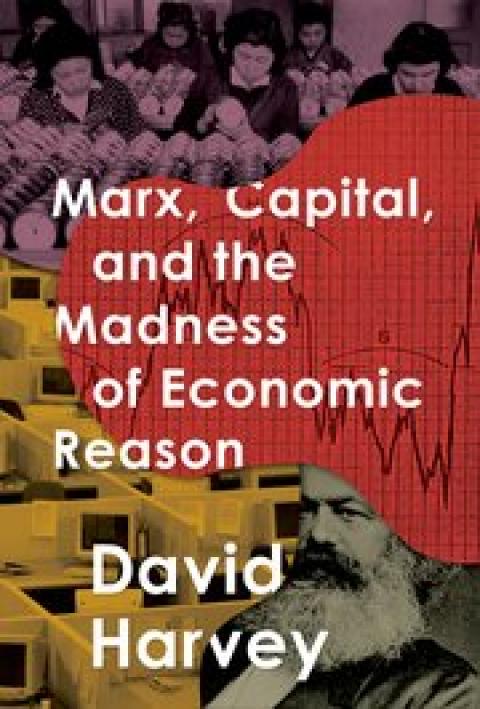 One third of children in the United States, still the richest country in the world according to David Harvey, live in poverty. They often, he writes, inhabit “toxic environments, suffer from hunger and lead poisoning even as they are denied access to elementary social services and educational opportunities”. This is the “madness of economic reason”.

Here are two rival examples. “We abhor social division, injustice, unfairness and inequality,” claimed the Tory manifesto in May. And yet, the following month, everything the government affected to abhor was written in the burning skies of the Royal Borough of Kensington and Chelsea. As many as 80 people died in the blaze at Grenfell Tower, yet within strolling distance of its ruin is some of the world’s most expensive real estate.

No matter. “A free market economy, operating under the right rules and regulations, is the greatest agent of collective human progress ever created,” Theresa May claimed to the Bank of England in a speech in September. But what Grenfell showed was that under free market capitalism, certainly the kind that has thrived in Britain since the millennium, rules and regulations are expendable: fire safety standards were deregulated under New Labour. Under Conservative rule, firefighter numbers have since been slashed, and local government cuts have undermined the effectiveness of safety inspections and induced cost-cutters to order cheap flammable cladding for blocks such as Grenfell.

And yet, many people still believe what May went on to say in her Bank of England speech, that the free market economy is “unquestionably the best, and indeed the only sustainable, means of increasing the living standards of everyone in a country”. After Grenfell, after a decade of austerity-era high-end construction that gives speculators places to park their money rather than live, while Britain struggles through a chronic absence of investment in affordable housing, what could be madder than that?

Here is something at least as mad. The communist leadership in Beijing may not have set out to save global capitalism in 2007-08 but that’s what it did, Harvey argues. In 2008, China faced a 30% contraction in exports and a loss of between 20m and 30m jobs as a result of the collapse in the US consumer market caused by the collapse of America’s speculative housing bubble. “People who have been foreclosed upon and who are unemployed don’t go and buy things,” Harvey notes wryly.

Beijing’s response was to go on a binge of debt-financed construction. In 2007, there was no high-speed rail in China; by 2015, the country had a 12,000-mile network. But that construction boom eventually receded, leaving China with a huge surplus productive capacity in steel and cement, and huge public debts. As a result, it exported as much steel as it could at low cost, plunging steel plants into crisis. China thereby exported the means of ruining industrial workers on the other side of the world rather than offering gestures of proletarian solidarity. No matter that steel production in Wales was and remains in peril and workers have been facing ruin – capitalism emerges from its self-created crisis stronger.

What is the moral of this Chinese economic miracle? “The relative spaces of the global economy are being revolutionised (yet again!) not because it is a good idea or desperately wanted and needed in itself, but because this is the best way to stave off depression and devaluation.” Which is, if you think about it, quite mad.

Harvey has long been a critic of capitalism’s inhumanity. In his 2014 book Seventeen Contradictions and the End of Capitalism, he yearningly imagined that the system is under threat as never before, just as the likes of Paul Mason and Slavoj Žižek regularly do. Global warming, habitat and species destruction, water scarcity and environmental despoliation suggested to him that it was in danger. So too did the fact that it was proving harder to find profitable investment opportunities.

Most important, though, in heralding capitalism’s demise is a contradiction he elaborates on in this book: the phenomenon of new alienation. Marx set out in his account of alienation (the labourer who creates value is separated or alienated from both what she makes and the surplus value created by her, which is appropriated by the capitalist). These days, it’s not just the have-nots who are revolting, but the haves, at least in countries such as Brazil and Turkey where the urban, educated middle classes reject the regimes from which they have materially benefited. What they yearn for, Harvey suggests, is not being bought off with material goods, not the compensatory consumerism that “limits and imprisons rather than liberates the horizons of personal fulfilment” but dignity.

Think of São Paulo, he suggests, a city that “has as its economic base a car industry that produces vehicles that spend hours stationary in traffic jams as they clog the city streets spewing pollutants and isolating individuals from each other. How insane an economy is that?”

To read Harvey is to doubt that free market capitalism is the best means of increasing the living standards of everyone
Nearly a century ago György Lukács argued that capitalism was still in business because people didn’t know their real needs: hence the difference between what he called actual and ascribed consciousness. The sense one gets from reading Harvey is that the gap in consciousness may be narrowing, if only through a growing sense of revulsion at how our societies and economies are organised.

Ever since 2008, sales of Das Kapital have risen, as some hope to find in its pages answers to our current woes. Just possibly, copies sit unread, forbidding rebukes to good intentions. Harvey’s book, like the now half-century-old Reading Capital by Louis Althusser and others, lays out the main arguments and insists on the relevance of Marx’s Victorian tome to a global capitalism very different from the one Marx analysed.

This book is also, however, when necessary, a creative betrayal of Marx. For instance, he imagined (apparently without irony) that the creation of new wants and desires was part of capitalism’s civilising mission. Harvey takes that endless manipulation to be our spiritual degradation as do the heretical neo-Marxists of the Frankfurt School.

Harvey still uses his grandparents’ knives and forks, while the rest of us assure market growth by consuming ephemeral products for instant gratification. He cites Netflix, though how Amazon, Apple and Facebook got off the hook is anybody’s guess: “Rapid transformations in lifestyles, technologies and social expectations multiply social insecurities and increase social tensions across generations as well as between diversifying social groups.”

We’re all familiar – aren’t we? – with the queasiness attendant on such rapid changes in how we live, changes that seem to have nothing to do with us, but to which we are forced to adjust, even on pain of losing what we belatedly realise is not an expendable commodity, namely our dignity. Or as Žižek puts it in Less Than Nothing: the “logic of exchange-value follows its own path, its own mad dance, irrespective of the real needs of real people”.

To read Harvey’s devastating indictment of how we live today is to doubt as never before our prime minister’s conviction that free market capitalism is unquestionably the best means of increasing the living standards of everyone. Indeed, I feel about May’s “collective human progress” much the same as Gandhi felt about western civilisation: it would be a good idea.

Stuart Jeffries’ Grand Hotel Abyss: The Lives of the Frankfurt School is published by Verso.