Warring visions have now erupted over the energy and economic futures of Puerto Rico and the Virgin Islands.Will the islands become a cutting-edge green-powered solartopia for the benefit of their long-time residents? Or a fossil-fueled robber baron playground like Hong Kong or Singapore, set to operate for the profit of outside corporate investors? 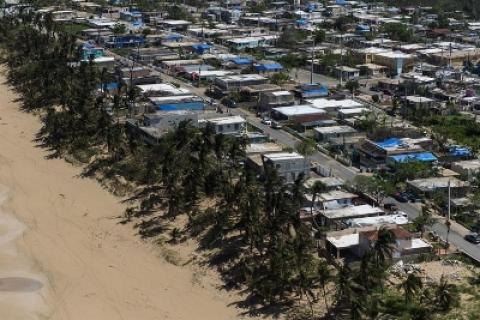 Warring visions have now erupted over the energy and economic futures of Puerto Rico and the Virgin Islands.

Will the islands become a cutting-edge green-powered solartopia for the benefit of their long-time residents? Or a fossil-fueled robber baron playground like Hong Kong or Singapore, set to operate for the profit of outside corporate investors?

On the solartopian side, Senators Elizabeth Warren and Bernie Sanders have proposed a $146 billion green “Marshall Plan” to rebuild Puerto Rico and the Virgin Islands as a prosperous, self-sufficient home for the indigenous citizenry. The bill is co-sponsored by Democratic Senators Ed Markey, Richard Blumenthal and Democratic Representatives Nadia Velazquez and Darren Soto along with Democrat Stacey Plaskett, the Virgin Islands’ non-voting Representative to Congress.

Representative Plaskett has also joined Congressman Ted Lieu, Democrat of California, in co-signing a letter asking that all Federal Emergency Management Agency funds for rebuilding the electric grids of the islands go for solar energy, wind power, and decentralized microgrids.

San Juan Mayor Carmen Yulin Cruz, who famously tangled with Trump over the direction of recovery plans, has said the Sanders-Warren-Lieu approach to rebuilding with green energy provides the blueprint for the “transformation” of the islands to local-controlled self-sufficiency.

On the solartopian side, Senators Elizabeth Warren and Bernie Sanders have proposed a $146 billion green “Marshall Plan” to rebuild Puerto Rico and the Virgin Islands as a prosperous, self-sufficient home for the indigenous citizenry. Solar panels are already pouring in.

The Warren-Sanders bill would give local governments $62 billion for economic development, Medicare/Medicaid parity, and other locally determined needs. It would provide $27 billion more for infrastructure, and $13 billion for FEMA to rebuild the grid “with more modern, resilient technologies” than the coal, oil, and gas burners that powered the islands before Maria.

Solar panels are already pouring in. Even before Maria, Puerto Rico had plans to add 1.5 gigawatts of solar capacity. At least one big solar array largely survived the storm, allowing a local greenhouse to resume business the day after the disaster. A large wind farm on the south side of Puerto Rico also got through, though its impact has been limited by the crippled grid.

After the storm, in consultation with Puerto Rico’s governor Ricardo Rossello, Elon Musk’s Solar City/Tesla donated a solar array that has successfully re-powered San Juan’s Hospital del Nino, making it one of the few hospitals on the island with a reliable source of electricity. As Musk said in a tweet, “The Tesla team has done this [built solar grids] for many smaller islands around the world, but there is no scalability limit, so it can be done for Puerto Rico too.”

To do more, Tesla announced it would delay the unveiling of its electric-powered tractor-trailer unit to focus on delivering more batteries to Puerto Rico.

The German company Sonnen, which was working pre-Maria with local customers to make the Puerto Rican grid more resilient, has been shipping inpanels, batteries, and micro-grids aimed at making hospitals and emergency facilities self-sufficient. So has the Houston-based Sunnova, which is retaining ownership of the hundreds of panels it has installed, then charging its customers a rate well below what they were paying before the storm hit.

“I am 100 percent backing renewables,” said Governor Rosselló to the U.S. Senate Energy and Natural Resources Committee. “This is an opportunity to make microgrids in Puerto Rico so they can be sustained in different areas.”

But not everyone shares the vision of a green-powered future. In October, Puerto Rico’s national utility, PREPA, made global headlines with a $300 million grid rebuilding contract given to Whitefish Energy, a two-year-old two-man operation based in Whitefish, Montana.

Whitefish is the hometown of Trump Interior Secretary Ryan Zinke, whose son had worked for the company. When it began shipping in line workers at huge rates, they were showered by locals with rocks and bottles. Finally the contract was voided and PREPA’s president resigned.

The fossil-fueled vision has strong support among lawmakers like Doug Lamborn, Republican of Colorado, who is backed by the oil and gas industry. Lamborn told a House Committee on Natural Resources hearing in early November that “renewables are great, but to provide that much electricity in that short a time is unrealistic.” Lamborn instead supports natural gas, with a rollback of environmental protections to encourage drilling and imports.

Committee Chair Rob Bishop, Republican of Utah, also the recipient of fossil industry support, has joined Lamborn in opposing an EPA presence that might restrict drilling and imports for a restored fossil-fired grid.

But corporate visions for the islands hardly stop with gas and oil. Representative Louie Gohmert, Republican of Texas, thinks “Puerto Rico has the potential of being the Hong Kong of the United States, where businesses would flood in there.”

“Puerto Rico has the potential of being the Hong Kong of the United States, where businesses would flood in there.”

Benjamin Dierker, of the libertarian Foundation for Economic Education, wants an “economic freedom zone” where environmental, minimum wage and other legal requirements would disappear. The “less restricted environment with more available resources would open the doors to investment and real estate development,” he says.

Desmond Lachman, a resident fellow at the American Enterprise Institute, also wants a reduced minimum wage and “corporate-friendly economic reforms” to make Puerto Rico “the Singapore of the Caribbean.”

Amid all of this corporate conniving, the people of Puerto Rico remain in dire straits.

“Food and water are still in short supply,” Joel Segal, a North Carolina activist with strong ties to the island, said in a recent radio interview on my Green Power & Wellness show on www.prn.fm. “The FEMA people just hand out forms with a phone number to call and a website to consult. People can’t even get tarps to cover what’s left of their homes.”

At least 200,000 citizens have already left Puerto Rico, most headed for Florida.

Because land titles have been passed down through generations of the poor, some ancestral residents are not being let back into what’s left of their homes because they can’t officially prove ownership.

Residents who have been restoring school buildings and re-starting classes at their own expense are being told by local authorities they must have inspections that never happen and permits that never come. Education activists are afraid that private charter schools will crush the public system, as in New Orleans after Katrina, where only a few public schools remain.

Because land titles have been passed down through generations of the poor, some ancestral residents are not being let back into what’s left of their homes because they can’t officially prove ownership.

“Land prices will plummet,” Segal says. “That will set off an unrestricted corporate rampage” aimed at converting the region to a Trump-style playground of shady financial centers, high-end hotels and mega-casinos for the super-rich.

That’s a future the people of Puerto Rico must avoid — and green energy is one way to do it.

[Harvey Wasserman hosts California Solartopia at KPFK-Pacifica, 90.7FM in Los Angeles, and the Green Power & Wellness podcast at prn.fm. He is author or co-author of about 20 books, including Solartopia! Our Green-Powered Earthat www.solartopia.org.]