Rather than making the government a model employer, the labor proposals would unite Uncle Sam with employee-regressive business practices designed to maximize profits. But Sam is in the business of service, not propelling profits. 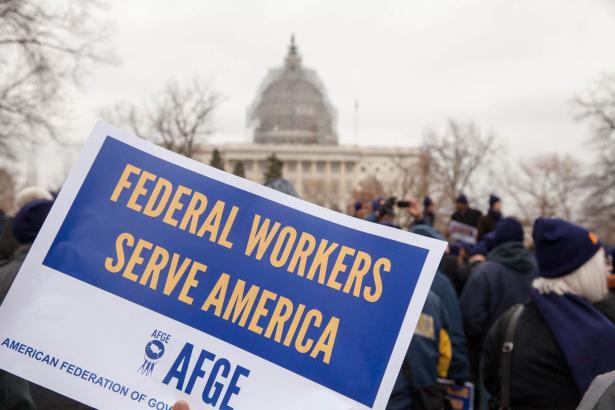 The Trump administration’s consideration of a wage freeze for federal employees is one piece of a renewed multifront Republican push to shrink those workers’ pay, benefits and workforce.

That effort has been around for years, but it now has an intellectual champion in the White House, and I don’t mean President Trump.

Confidential administration information released last week by Sen. Claire McCaskill (Mo.), the leading Democrat on the Senate Homeland Security and Governmental Affairs Committee, revealed an administration proposal to freeze federal salaries in fiscal 2019. That is the third piece in a pattern that includes Trump’s 2018 budget proposal to cut the employer contribution to retirement benefits and the House Republican plan to have retirees pay more out of pocket for their health insurance.

Congress did not approve the last two recommendations, and the pay freeze, which Trump can impose, is not beyond the leaked-document stage. Yet the proposals lurk, likely to reemerge in future budget plans after having long percolated in conservative circles.

Now, with James Sherk — a chief proponent of the notion that federal workers are overpaid — serving as Trump’s labor adviser, the proposals stand their best chance yet of becoming policies that dig deep into federal employees’ pockets.

Sherk, a labor economist, joined Trump’s team early this year after working for the conservative Heritage Foundation. His co-authored report, “Why It Is Time to Reform Compensation for Federal Employees,” was published by Heritage just days after the 2016 Republican National Convention nominated Trump.

The bottom line: Feds would get less pay and benefits for more work.

“Our paper was intended to serve as a framework for any candidate or elected official who wants to improve the way the federal government operates and offer more competitive options to federal employees,” Rachel Greszler, a Heritage economist who wrote the report with Sherk, said by email Friday.

“Reform” really does not convey the serious bite of their proposals. The central thesis is that federal workers are overcompensated compared with those in the private sector. They outlined a plan to cut those costs — a blueprint that Sherk can now follow from a position of influence in the White House — “to the extent that the administration is willing to take on the labor policies that Sherk has spent much of his career championing,” Greszler said.

Policies like Sherk’s “undermine the value this country places on public service by targeting the income security of those who carry it out,” said Richard G. Thissen, president of the National Active and Retired Federal Employees Association. “Whether caring for our veterans, responding to disasters or just ensuring the day-to-day operation of democratic government, the work these individuals do is vital to our country, and it should be rewarded, not devalued.”

The paper did not call for a pay freeze, but Greszler’s email said that “without Congressional action, it is the administration’s only tool. While a freeze alone doesn’t help achieve a more competitive pay structure (because the current system massively overcompensates lower-skilled workers and provides little to no compensation premium for the highest-skilled workers), it could serve as a bargaining tool for more comprehensive Congressional action.”

Rather than making the government a model employer, the proposals would unite Uncle Sam with employee-regressive business practices designed to maximize profits. But Sam is in the business of service, not propelling profits.

Sherk and the White House declined my requests to speak with him, but his published work speaks for itself.

Sherk has argued for years that federal compensation is too high. Consider the title of his 2010 Star Tribune piece: “Who in This Country Has More than They Deserve? Most Federal Employees.”Really? Seeking to counter that negative notion, he and Greszler want to:

One compensation increase they favor is bigger performance bonus budgets, but within a process that would cut average federal pay by five percentage points after implementation of smaller step increases.

Although Sherk has a long-standing interest in federal compensation, none of several federal employee organizations contacted said he had spoken with them since he joined the White House.

“We’ve never heard from James Sherk,” said Steve Lenkart, executive director of the National Federation of Federal Employees. “We don’t know him, and he certainly doesn’t know us or federal employees or families. He doesn’t represent the values that working people share, nor does he understand the complexities of the federal workforce.