Nice "trickle-down economics" you've got there. 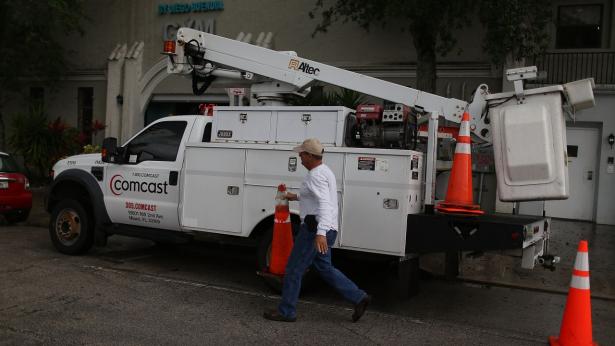 A Comcast service worker places safety cones next to his truck on April 23, 2015 in Miami, Florida., Joe Raedle/Getty Images

At least two major companies that publicly announced large bonuses for their employees after the passage of a massive GOP-led tax overhaul — which represented a windfall for wealthy Americans and big corporations — quietly laid off hundreds of workers at the same time.

Comcast laid off more than 500 sales employees right before Christmas, according to documents reviewed by media outlets including the Philadelphia Enquirer, Philly.com, and the Daily News. The documents were confirmed by at least one former Comcast employee who was not identified in the press.

AT&T is also in the process of laying off thousands of employees, according to the Communication Workers of America (CWA) union, which represents AT&T workers. CWA filed a lawsuit against the company claiming that some of those layoffs are needless, and that the timing of the terminations — just two weeks before Christmas — represents “an extraordinary act of corporate cruelty.”

Both telecommunications giants struck a very different tone in the aftermath of the tax bill that was rushed through Congress last month.

Comcast and AT&T were among the businesses that claimed Republican lawmakers’ effort to restructure the tax code in favor of wealthy corporations would allow them to be more generous to their workers, and publicly announced $1,000 year-end bonuses for their employees. The CEOs of both companies specifically cited the tax bill in separate press releases touting these “special” bonuses.

But Larry Robbins, the vice president of CWA Local 4900, told the IndyStar that AT&T started privately notifying its workforce of impending layoffs at the same time as it publicly celebrated the benefits of the tax bill. “We believe the $1,000 bonus and the promise of 7,000 new jobs are all a publicity stunt,” Robbins said.

Union to Southwest: $1,000 worker bonuses don’t make up for years of stagnant pay

In general, union leaders have been incredibly skeptical of the big companies promising bonuses to their employees in the wake of the tax overhaul. After Southwest Airlines became the latest company to announce its plan to award $1,000 bonuses, the Aircraft Mechanics Fraternal Association (AMFA) told ThinkProgress that the gesture isn’t enough to make up for years of workers’ stagnant pay and the company’s unfinished collective bargaining agreement, which is currently under negotiations.

Republican lawmakers touted their tax plan as good news for American workers, arguing that providing corporate tax cuts allows those companies to put money toward worker compensation and job creation. This dubious theory, known as “trickle-down economics,” hasn’t been borne out in U.S. history and is unlikely to work as promised in the Trump era, either.

Even though promises of big worker bonuses have successfully captured headlines, large corporations have already signaled that their shareholders are the ones who will reap the greatest benefits of the tax overhaul. Several major companies have announced massive share buybacks, which don’t do anything to benefit their workers but instead further enrich their shareholders.

Tara Culp-Ressler is a senior editor at ThinkProgress. She was previously a health editor and health reporter for the site. Before joining ThinkProgress, Tara worked for several progressive religious nonprofit organizations. She graduated from American University.

Because ThinkProgress covers white nationalism and other controversial topics, we have been placed into a category of sites which many advertisers are blocking.  ThinkProgress relies on advertising revenue to fund a substantial portion of our work.  In other words we are being financially punished for our work exposing racism.  One thing is certain, we will not change our mission or our approach to the news to bring back advertisers.  Please click here to join ThinkProgress and become a member.