Angela Davis’s feminism was born through Marxism, and through theory and collective struggles as well. These two steps opened the road for a feminism that includes poor and black women, standing out against mainstream white, bourgeois feminism. It is not even possible to speak of a white feminism anymore, not only in the USA, but also in Europe. Europe is no longer a white continent. 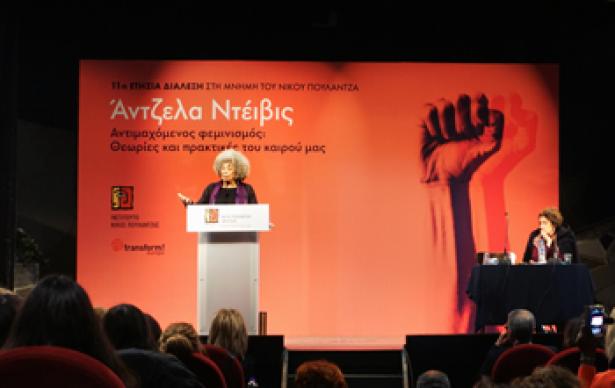 In Athens, in a crowded room of 600 people, which proved very small for such an incredible woman, Angela Davis started her lecture by expressing her gratitude. She thanked all the Greek political prisoners who, back in 1970-1972, when she was facing the death penalty, joined the international solidarity struggle for her release. International solidarity, as she highlighted, must today be demonstrated towards the Palestinian people who relentlessly fight for their rights and their lives.

[This year, Angela Davis, renowned academic and activist for civil, feminist and prisoners' rights, was asked to deliver a speech at the annual lecture in memory of political sociologist Nicos Poulantzas entitled “Abolition Feminism: Theories and Practices for Our Time”.]

Angela Davis’s feminism was born through Marxism, and through theory and collective struggles as well. These two steps opened the road for a feminism that includes poor and black women, standing out against mainstream white, bourgeois feminism. It is not even possible to speak of a white feminism anymore, not only in the USA, but also in Europe. Europe is no longer a white continent.

She couldn’t help but mention the Black Lives Matter movement, in order to underline how feminist and queer women can change the very nature of leadership within a movement, turning it in a direction in which, when black women’s lives matter, all lives matter. During her speech, she digressed to share the experience of her visit to the occupied “City Plaza” social centre in the heart of Athens with her audience. She was impressed by the work of the activists, and the refugees as well, who have managed to create an egalitarian community so far. It runs autonomously, covering the material needs of people who fight for a decent living away from their homelands.

The relationship between racism and capitalism

Angela Davis has been studying Marxism her whole life. And it is through this methodology that she tries to understand the very relationship between racism and capitalism. The same applies to gender and its interference with race and class. What feminism, our feminism, seeks – amongst other things – is to analyse the white male supremacy within the “class” category, given that gender is constantly subjected to race and class (and, we should not forget, other determinant factors, such as sexuality and ability). Although, as she admitted, it was not possible to go deeper into this issue, she stressed the importance for all of us to continue analysing the changing roles and backgrounds of the working class. She observed all the important steps that have been taken through struggles and that cannot be interpreted only by one category or the other. Afterwards, she referred to the trans movement and to its success in exposing the role of ideology in the construction of the concept of normality. The normalisation of gender, and how we contest it, leads us also to question the normalisation of other concepts, such as the permanency of capitalism.

The main part of Angela Davis’s lecture unfolded around the concept of abolition feminism. Her first words were to clarify that the term is completely irrelevant to the abolition of prostitution, and that she definitely and indisputably supports the right of sex workers to organise themselves. The audience enthusiastically applauded her. Abolition feminism is the feminism that embraces the abolition of repressive apparatus, such as the police and prisons, which have incorporated remnants of the slavery system over the decades. It is only now, in the 21st century, that we are attempting to address some of the repercussions of slavery. If we, therefore, accept the argument that the convict system is a form of slavery, an effort to manage black labour in ways that replicate the institution of slavery, and that slavery did not end until the ‘40s, when the system was finally abolished, this would mean that the USA has had 320 years of slavery compared with only 70 years without slavery. This drives us to the recent presidential elections in the USA. Trump’s call to “make America great again” is really a call to make America old, white and male. Angela Davis quoted at that point the senatorial candidate from Alabama – endorsed by Trump – who said, “America was great at the time when families were united. Even though we had slavery…”.

Education as a commodity

She also referred to the connection between slavery and capitalism that shapes what we can call “racial capitalism”. The slave trade has been an important aspect of the capitalist accumulation and a way of generating wealth. Afterwards, commenting on the first period of globalisation, she referred to the universities, higher education and public nature of them here in Greece, comparing it with the USA. Higher education in the USA is not only commodified, but all these years of commodification have produced an ideology that make students unable to think of education as anything other than a commodity. Continuing on the effects of globalisation, she underlined that the deindustrialisation of the era of globalisation created surplus communities. Communities that no longer had the means to live. These people became the recruits for the developing prison industrial complex. The targeted communities are people of colour. The prisons became places to house those who could no longer find a place in a changing capitalist world. Soon after, the prisons themselves became sources of profit. That is why, as she claimed, the term “prison industrial complex” was created and offered to those who attempt to understand the role of punishment in shaping social relations. The term reveals the connection between global capitalism, racial capitalism and state punishment. This connection, and certainly what is called the prison industrial complex, finds a specific meaning now, during the “migrant/refugee crisis”.

How can we tackle violence without reproducing it?

Angela Davis has been working on prisons for almost all her life. From the starting point of her career – to support political prisoners – up until the current moment, in order to abolish this system (abolition as a call to reimagine justice), one of the most fundamental issues is to find new ways to address harm. How can we tackle violence without reproducing it? But of course, abolition feminism has been the object of an extensive criticism on behalf of feminist circles as well. This criticism starts from the acknowledgement that, especially now, women have at least succeeded to criminalise sexual harassment, domestic and intimate partner violence, and make these male violators accountable. What do we expect from the abolition of this very system? Angela Davis and supporters of abolition feminism call on everyone to think up new ways to address and cope with gender violence. For this precise point, she finds in abolition feminism a response to “carceral feminism”, the term that describes law and order feminist activism aiming to use the state’s punitive apparatus in order to bring about social justice for women. Quoting Beth Richie from the book Arrested Justice: Black women, violence and America’s prison nation, “a feminism that relies on criminalization will not only read the world of gender violence […] but this kind of feminism will also assist in building up a system that will maintain the structural racism within the prisons worldwide that hold a dramatic number of people from the black and Latinx communities, from the Global South and from indigenous communities”.

An era defined by the rise of women

Angela Davis was confident when saying that this is an era defined by the rise of women. She couldn’t help but mention the women’s march in Washington after the inauguration of Trump, characterising it as one of the experiences that reveal how we have reached the historic occurrence where a job that has been done for years is now beginning to produce material results. Many black men within the Black Lives Matter movement identify themselves as feminists and recognise feminism as a methodology of struggles. When black women and women of colour rise up, the whole world rises up. And when people resist, when they call for a better world, our vision finds its focus. The struggles, therefore, of today are the stepping stones for the struggles of tomorrow, enabling future generations to continue this work.

The preservation of historical memory

Angela Davis concluded her lecture by saying that it is precisely within this framework that we should all think about the Palestinian struggle. We ought to preserve historical memory, acknowledging that the Palestinian people never gave up and considering them, as a result, an inspiring example of resistance around the world. Trump’s announcement that he will claim Jerusalem as the capital of Israel should receive an answer from us all in the empowerment and even greater support for the Boycott, Divestment and Sanctions (BDS) movement!

[Angelina Giannopoulou is an Athens-based political scientist, facilitator of transform! europe in the programme "European Integration and the strategic perspectives of the radical Left" and researcher at the Nicos Poulantzas Institute.] 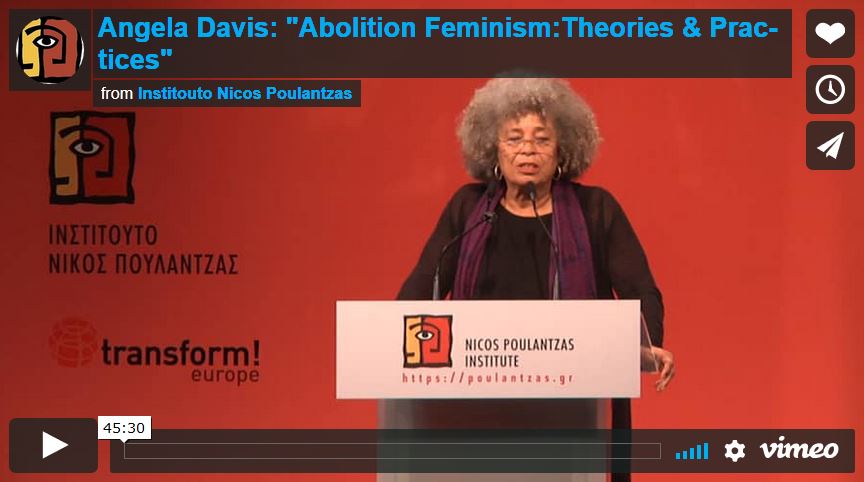