Seeger had been blacklisted as a communist and this gutsy defiance of a corporate media giant marked his return to the mainstream cultural scene. 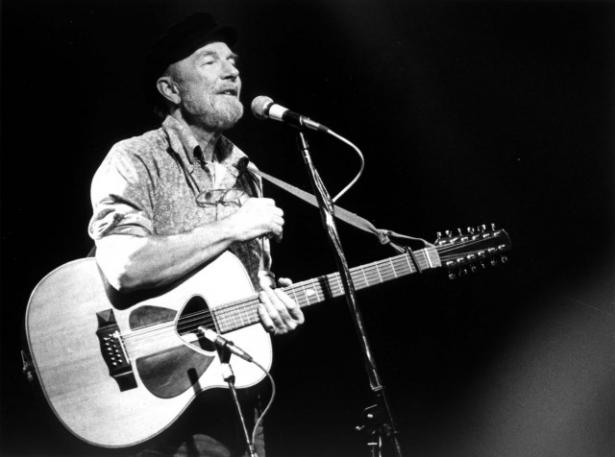 Watch Pete on The Smothers Brothers

Fifty years ago this week, folk singer Pete Seeger performed the controversial anti-war song “Waist Deep in the Big Muddy” on the Smothers Brothers Comedy Hour show on CBS television. The story of that appearance, and that song, illustrates the tumultuous political tensions of the era and was a bold act of defiance against corporate media power.

Seeger, who died in 2014, is now viewed as a legendary figure in American history. But when Tom and Dick Smothers invited him on their show, many people still viewed him as a dangerous radical, marginalized by the nation’s political, business, and media establishment.

Seeger had been blacklisted from network television since the 1950s because of his leftist politics. For a brief period in the early 1950s, as a member of the Weavers quartet, he performed in prestigious nightclubs, appeared on network television shows, and recorded several hit songs, including “Goodnight, Irene,” “Tzena Tzena,” “Wimoweh,” and “So Long It’s Been Good to Know You.” But as engaged radicals, they were an easy target for the Red Scare’s blacklist. They lost their television show contracts and nightclub bookings. Radio stations stopped playing their songs and their records stopped selling.

Seeger left the Weavers but his solo career also fell victim to the Red Scare. In 1955, Seeger was convicted of contempt of Congress for refusing to discuss his political affiliations before the House Committee on Un-American Activities. (He never spent time in jail and the conviction was overturned on appeal in May 1962). Most colleges and concert halls refused to book him and he was banned from network television.

During the blacklist years, Seeger scratched out a living by giving guitar and banjo lessons and singing at the small number of summer camps, churches, high schools, colleges, and union halls that were courageous enough to invite the controversial balladeer. In the 1960s he sang with civil rights workers in the South and at the march from Selma to Montgomery, Alabama, and helped popularize “We Shall Overcome.” But ABC refused to allow Seeger to appear on Hootenanny, which owed its existence to the folk music revival Seeger had helped inspire.

Tom and Dick Smothers were among many musicians inspired by Seeger’s artistic and political contributions. In 1967, CBS invited the brothers to host their own variety show, The Smothers Brothers Comedy Hour, which became a huge success, appealing to young viewers by inviting major rock and folk artists as well as comedians who reflected the political and cultural rebelliousness of the era. One sketch that lampooned President Lyndon Johnson so upset the president that he phoned CBS founder William S. Paley at home at 3 a.m. to complain.

The brothers had requested that Seeger be invited to perform, but CBS refused. Midway into the first season, however, the show’s popularity gave the Smothers more leverage with the recalcitrant network executives. Network chief Paley agreed on the condition that Seeger avoid singing any controversial songs—a demand that was, from the outset, guaranteed to provoke the Smothers brothers’ and Seeger’s defiance.

Seeger showed up to tape the second season’s opening show on September 1, which was scheduled to air September 10. At the taping, Seeger sang “Waist Deep in the Big Muddy,” a song he had written earlier that year, inspired by a photo of American troops slogging through a deep river in Vietnam’s Mekong Delta.

The song tells the story of a platoon of soldiers wading into the mud of a river while on a practice patrol in Louisiana in 1942. The captain, whom Seeger calls a “big fool,” ignores his sergeant’s warnings that the river is too deep to cross. The captain drowns and the sergeant orders the unit to turn back. The song doesn’t mention Vietnam but the “big fool” obviously refers to Johnson who got the country deeper into the quagmire in Southeast Asia.

Understandably nervous about offending Johnson again, CBS executives erased Seeger’s song from the tape of the show. The censors had no objection to his performance of the African song “Wimoweh” (in classic Seeger style, he had the whole studio audience singing along), the Cuban song “Guantanamera,” and “This Land Is Your Land.”

In his network comeback, Seeger sang four songs that reflected his internationalism and humanism, which helped him escape the media establishment’s blacklist—in prime time, no less.

In his network comeback, Seeger sang four songs that reflected his internationalism and humanism, which helped him escape the media establishment’s blacklist—in prime time, no less. Close to 12 million American households watched the program.

But the Smothers brothers weren’t happy. Tom, in particular, made sure that the story of CBS’s censorship appeared in the media. Because of the bad press, an outcry among the public, and the Vietnam War’s growing unpopularity, CBS allowed the brothers to invite Seeger back later in the season.

To whet the public’s appetite, Tom Smothers leaked the story to The New York Times, even announcing that Seeger would perform the banned “Big Muddy” on the show. A week before the scheduled broadcast, Seeger taped the show in Los Angeles.

Seeger performed five songs, including a medley of anti-war songs from American history which led up to “Big Muddy.” He ended the song with an uncharacteristic dramatic flourish, bringing his guitar up to his face, suggesting both a sigh of relief and moment of pride that he had managed to pull it off.

The audience for this show—13.5 million households—was even larger than Seeger’s appearance five months earlier. Two days after Seeger sang “Big Muddy,” CBS news anchor Walter Cronkite—perhaps the nation’s most trusted person—called on Johnson to withdraw American troops from Vietnam. On March 31, Johnson—facing strong opposition from anti-war candidates Eugene McCarthy and Robert Kennedy—announced he would not seek re-election that year.

Meanwhile, the Smothers brothers continued to find themselves in trouble with CBS. In the 1968-1969 season premiere, the network deleted an entire segment featuring Harry Belafonte singing “Lord, Don't Stop the Carnival” while newsreel footage of the violence at the 1968 Democratic national convention played in the background. In March 1969, folk singer Joan Baez paid tribute to her then-husband, David Harris, who was about to enter prison for refusing military service. CBS censors permitted Baez to mention that her husband was in prison, but edited out the reason.

But CBS CEO Paley abruptly canceled the show on April 4, 1969, explaining that the Smothers brothers had failed to comply with the order to submit the shows to network executives ten days in advance. (The show won an Emmy anyway.) The Smothers brothers sued CBS for breach of contract, and in 1973, a federal court ordered CBS to pay them nearly $800,000. Two years later the brothers returned to television with The Smothers Brothers Show that was less controversial and less successful, lasting only 13 episodes.

The brothers continued to perform until they retired in 2010, but their popularity never recovered after the cancellation of The Smothers Brothers Comedy Hour. But Seeger’s two appearances on the show—and the controversy surrounding “Big Muddy”—helped revitalize his career.

Over the next five decades, through persistence and unrelenting optimism, Seeger became a symbol of a principled artist deeply engaged in the world. Many of his eighty albums, which include children’s songs, labor and protest songs, traditional American folk songs, international songs and Christmas songs, reached wide audiences.

In 1994, at age 75, he received the National Medal of Arts as well as a Kennedy Center Honor, where President Bill Clinton called him “an inconvenient artist, who dared to sing things as he saw them.”

Seeger’s made his final television appearance in 2012 on another comedy program’s Stephen Colbert’s iconoclastic Colbert Report on Comedy Central. The 93-year-old Seeger talked with the awestruck Colbert about his new book, Pete Seeger: His Life in His Own Words, and then performed his song, “Quite Early Morning,” on the banjo. The song begins, “Don't you know it's darkest before the dawn. And it's this thought keeps me moving on.”  Unlike “Big Muddy,” it is a song of hope, urging people to abandon cynicism and look forward to more “singing tomorrows.”