New Philadelphia District Attorney Larry Krasner is making good on his promise to revolutionize the job of district attorney and, in the process, offering an extraordinary experiment in criminal justice reform at the municipal level that could serve as a national model. 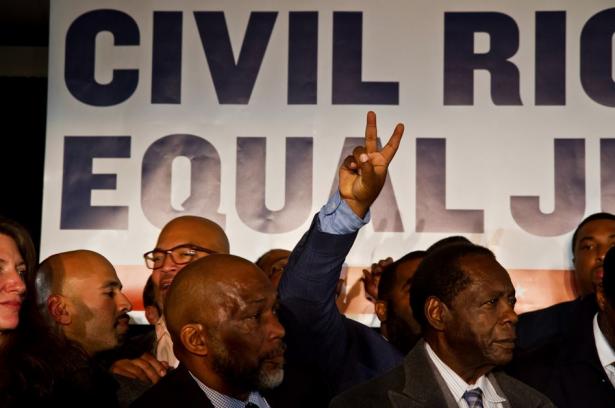 Philadelphia’s newly minted district attorney, Larry Krasner, was meeting constituents in a packed church in West Philadelphia earlier this month to discuss his plans for the job. The meeting was unique in that it quickly revealed to community members what local civic leaders and officials have already learned about Krasner: He is making good on his promise to revolutionize the job of district attorney and, in the process, offering an extraordinary experiment in criminal justice reform at the municipal level that could serve as a national model.

In the church, queries and complaints from constituents that might have made his predecessors cringe were softballs for Krasner: a loved one has been wrongfully incarcerated? Send the case to the revamped Conviction Review Unit, a sort of in-house innocence project. How can lying officers be kept off the stand? He has staff working to verify and expand a formerly secret “do not call” list of 29 suspect officers. Late in the meeting, one elderly woman asked a question that cuts to the core of concerns for those who doubt Krasner’s reforms: What would he do about the drug dealers and users on her street that make her feel unsafe? He didn’t miss a beat: “The past solution was to lock [corner drug dealers] all up and that didn’t work. We have to go after root cause,” he says. This came after an extended riff promising “to go after doctors, and pharmaceutical corporations” for their role in the nation’s opioid crisis. Notably, his office had already initiated legal proceedings against some of those pharmaceutical companies.

Back on the campaign trail last year, Krasner, a former civil rights and criminal defense attorney who had been best known for suing police officers, offered a stump speech that condemned the criminal justice system for being racist and for criminalizing poverty and addiction. He was an unusual candidate to be the city’s top law enforcer. Voters swept him into office. Now, two months into his term, DA Krasner is virtually undistinguishable from candidate Krasner.

On Tuesday, Krasner issued a memo to his staff making official a wave of new policies he had announced his attorneys last month. The memo starts: “These policies are an effort to end mass incarceration and bring balance back to sentencing.”

“These policies are an effort to end mass incarceration and bring balance back to sentencing,” Larry Krasner said in an announcement on Tuesday.

The most significant and groundbreaking reform is how he has instructed assistant district attorneys to wield their most powerful tool: plea offers. Over 90 percent of criminal cases nationwide are decided in plea bargains, a system which has been broken beyond repair by mandatory minimum sentences and standardized prosecutorial excess. In an about-face from how these transactions typically work, Krasner’s 300 lawyers are to start many plea offers at the low end of sentencing guidelines. For most nonviolent and nonsexual crimes, or economic crimes below a $50,000 threshold, Krasner’s lawyers are now to offer defendants sentences below the bottom end of the state’s guidelines. So, for example, if a person with no prior convictions is accused of breaking into a store at night and emptying the cash register, he would normally face up to 14 months in jail. Under Krasner’s paradigm, he’ll be offered probation. If prosecutors want to use their discretion to deviate from these guidelines, say if a person has a particularly troubling rap sheet, Krasner must personally sign off.

“It’s the mirror of a lot of offices saying, ‘If you don’t ask for the max you’ve got to get my permission,’ ” says David Rudovsky, a prominent Philadelphia civil rights attorney. For longtime career prosecutors, this will take some getting used to. “You want to be sure your assistants are actually doing it,” Rudovsky says.

Krasner’s lawyers are also now to decline charges for marijuana possession, no matter the weight, effectively decriminalizing possession of the drug in the city for all nonfederal cases. Sex workers will not be charged with prostitution unless they have more than two priors, in which case they’ll be diverted to a specialized court. Retail theft under $500 is no longer a misdemeanor in the eyes of Philly prosecutors, but a summary offense—the lowest possible criminal charge. And when ADAs give probation charges they are to opt for the lower end of the possible spectrum. “Criminological studies show that most violations of probation occur within the first 12 months,” the memo reads, “Assuming that a defendant is violation free for 12 months, any remaining probation is simply excess baggage requiring unnecessary expenditure of funds for supervision.” When a person does break the rules of probation, minor infractions such as missing a PO meeting are not to be punished with jail time or probation revocation, and more serious infractions are to be disciplined with no more than two years in jail.

In a move that may have less impact on the lives of defendants, but is very on-brand for Kranser, prosecutors must now calculate the amount of money a sentence would cost before recommending it to a judge, and argue why the cost is justified. He estimates that it costs $115 a day, or $42,000 a year, to incarcerate one person. So, if a prosecutor seeks a three-year sentence, she must state, on the record, that it would cost taxpayers $126,000 and explain why she thinks this cost is justified. Krasner reminds his attorneys that the cost of one year of unnecessary incarceration “is in the range of the cost of one year’s salary for a beginning teacher, police officer, fire fighter, social worker, Assistant District Attorney, or addiction counselor.”

This latest wave of reforms comes on the tail of others. Since January he has told his attorneys not to seek cash bail for 25 charges; dropped 51 marijuana charges, en masse; joined the mayor in pushing for Philadelphia to become the first U.S. city to open a safe injection site, a clinic where people can inject drugs under nurse supervision and receive addiction treatment if they choose; and he’s suing 10 pharmaceutical companies, alleging their marketing methods have fueled the opioid crisis.

He also set the stage to undo mistakes of Philly DAs’ past by reviving the office’s Conviction Review Unit, which is charged with re-investigating petitions of innocence. His predecessor created the unit in 2014, but until last year it had only one part-time staffer. One of Krasner’s first moves was to convince an attorney whose work undoing wrongful conviction is nationally acclaimed, Patricia Cummings, to move across the country, where she was head of Dallas’ peerless CRU, to head his unit. “I can’t think of another place where there is such a need to do the work, and there is such a progressive, forward-thinking person who is going to enable you to do it right,” Cummings told me. Currently, her team is re-investigating about 120 cases, compared to the seven that were being re-investigated when she came into office. Cummings and Krasner also want to expand the scope of botched cases to include over-sentencing.

Beyond these new policies, Krasner has forged a close working relationship with the city’s public defenders. “We agree on so much at that top level,” the chief defender, Keir Bradford-Grey, tells me. “I don’t see why two people that have a major impact on the system would not get together to figure out what we are doing, and where we want to be. That’s how it should work, right?”

Krasner’s policy shop—which has grown from one part-time staffer to three full-time—meets with the defender’s policy director regularly to brainstorm systemic changes. “Now in these discussions we come up with new innovative ideas to reduce incarceration but also keep the community safe. Before it was nibbling around the edges,” says Mark Houldin, the public defender’s policy director, comparing these meetings to similar ones under the previous administration.

Krasner’s election was consistent with Philadelphia’s recent mood around criminal justice. Two years ago, the city elected Mayor Jim Kenney, who Philadelphia Magazine labeled “Mr. Criminal Justice Reform.” Under his leadership and with the help of a multimillion-dollar grant from the MacArthur Foundation, the city has brought the jail population down by 26 percent since July 2015.

This is not to say that all the city’s criminal justice players are on board with the Krasner experiment. The leader of the local Fraternal Order of Police, John McNesby, is a vocal critic. He recently warned cadets not to listen to the “dangerous” and “despicable” presentation that Krasner gave on the legal and illegal use of service firearms. McNesby’s outrage seems to be about a comment Krasner made about using caution when aiming for a suspect’s torso and chest. (McNesby did not reply to a request for comment.) And in the courtroom, some judges have reportedly been pushing back on the more lenient offers that prosecutors have been making.

Rudovsky said this likely amounts to growing pains, comparing it to when the city council moved to decriminalize possession of small amounts of marijuana in 2014, making it a fine-only offense. “They all objected: Police commissioner, the mayor, the DA,” Rudovsky said. “It was the end of the world, right? And now everyone is perfectly happy with it. I think we’ll see that here too.”

[Maura Ewing is a writer in Philadelphia.]