Sex a Key Part of Life for People over 65, Study Says

US survey finds two-fifths of people between 65 and 80 report being sexually active, but topic is rarely discussed. 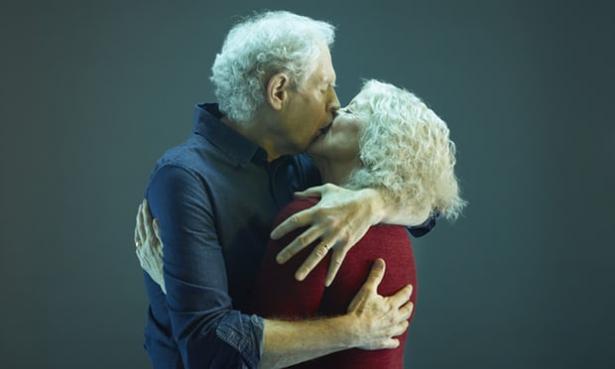 84% of men and 69% of women between 65 and 80 believe sex is important to a relationship at any age, a survey has found, Tim Macpherson/Getty Images

Sex is not only a pursuit of the young and carefree but also a key part of life for adults in their later years, a new poll has revealed – putting paid to the trope that action stops as pensions loom.

A US survey has found that 40% of those aged between 65 and 80 report being sexually active, with more than half of those who have a partner saying they still engage in steamy moments.

“We recognise that sex and sexual health is something that is very important to the health and wellbeing of older people but is not something that gets a lot of attention,” said Dr Erica Solway from the University of Michigan, who was involved in the research. That, she says, could be because either individuals or medical professionals don’t raise the issue. “We thought this was a unique way to better understand this issue from the perspective of older people,” she said.

The findings, part of the university’s National Poll on Healthy Aging, are based on online answers from around 1,000 participants aged between 65 and 80, and are nationally representative. The study was funded by Michigan Medicine – part of the university – and AARP, an interest group for ageing.

The results reveal that 84% of men and 69% of women between 65 and 80 believe sex is important to a relationship at any age, with just over half of men and just under a third of women reporting that they were sexually active – although the researchers did not define quite what that involved. “We wanted it to be how that person defined it,” said Solway.

While 12% of women reported having a strong interest in sex, more than 50% of men said the same. Fewer men were “extremely or very” happy with their sex life compared with women.

Age was another key factor. Only a quarter of those aged between 76 and 80 reported being sexually active, compared with 46% of those aged 65-70.

The authors say the report shows that while sex is important for many older adults, the topic is rarely discussed with either partners or healthcare professionals – just 17% of participants said they had talked about it with a health provider in the past two years, despite almost two-thirds saying they’d be happy to do so.

“Some of these conversations are not happening,” said Solway. “It is possible it is because people don’t have problems, but more likely what might be happening is that healthcare providers may be more likely to wait for the older adults themselves to initiate a conversation.”

Solway said the lack of discussion was important, not least because such conversations could help increase testing and awareness of sexually transmitted infections. According to UK figures, diagnoses of infections such as chlamydia are soaring among older adults.

What’s more, 18% of men and 3% of women in the 65-80 age group reported taking medications or supplements in the last two years to improve their sexual function. “It is possible that there could be interactions with other medications that they are taking,” said Solway.

And there might be other benefits from talking to doctors: recent research has found that while sex in older age appeared to protect women from cardiovascular problems, the opposite was true for men.

Lesley Carter of Age UK said the report chimed with findings from England, and that it was time to get rid of stereotypes and misconceptions about sex in older age. She added that it was important medical professionals broached the topic with patients: “We know as younger people if you don’t get [sex] enough then you are quite miserable, but that is the same thing in older people. I think we as a society have to agree that older people have a right to good sexual health too, because every message is always about younger people.”

Prof Josie Tetley of Manchester Metropolitan University, who has worked on English studies into the issue but was not involved in the latest survey, agreed. “Evidenced-based data from the English Longitudinal Study of Ageing has identified that sex and intimacy are important issues of ageing,” she said.

“However, our research recognises that sex and intimacy is not all about penetrative sex, and we are looking at how sex and intimacy can be supported in later life through health and relationship support.”

Nicola Davis writes about science, health and environment for the Guardian and Observer and was commissioning editor for Observer Tech Monthly. Previously she worked for the Times and other publications. She has a MChem and DPhil in Organic Chemistry from the University of Oxford. Nicola also presents the Science Weekly podcast.