Is This Your Image of the Working Class? You Need to Update It

Rewriting our economic rules requires putting the needs of America’s wage earners—black, brown, white, immigrant, male and female—at the center of our politics, not invisible in the margins. 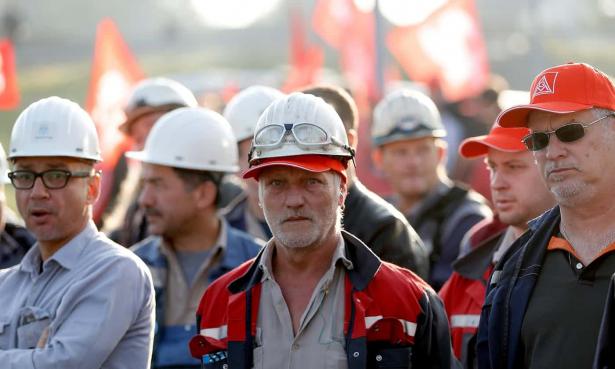 ‘The declining political clout of the working class and the concomitant degradation of working-class living standards impacts all of us.’ , Friedemann Vogel/EPA

My father was a steelworker, the epitome of the person you likely conjure up when you hear someone described as “working class”. White, male, hard hat and lunch pail, steel-toed boots and a dark blue uniform he’d bring home at the end of every shift and promptly throw in the washing machine. The earthy, sweaty, and metallic smell lingered in the laundry room after he closed the lid.

He taught me how to play basketball, badminton and throw a decent baseball as well as how to fix a flat tire. Most importantly, he gave me the grit and resilience –and some might say, hard-headedness – to make my way from a blue-collar upbringing in Middletown, Ohio, to create a life and career in New York City. My dad was the last generation of working-class heroes – the men who soldered, heaved and secured America’s industrial might in the world, and as a result earned the pride and respect of our nation.

But men like my dad no longer epitomize the working class today.

Put simply, the working class shifted from 'making stuff' to 'serving and caring for people'

As the manufacturing footprint in the working class has shrunk, so has the white male archetype that has historically defined the working class. Today’s working class is more female and racially diverse – with whites comprising less than 60% of the working class, down from nearly 9 out of 10 in 1970. Similarly, two-thirds of working-class women are in the paid labor market, up from less than half in 1970.

Put simply, the working class shifted from “making stuff” to “serving and caring for people” – a change that carried significant sociological baggage. The long-standing “others” in our society – women and people of color – became a much larger share of the non-college-educated workforce. And their marginalized status in our society carried over into the working class, facilitating the invisibility and devaluing of their work.

No longer shuttered away in a factory, today’s working class is interwoven into nearly every aspect of our lives. It’s the black woman in a caretaker’s smock wearing special comfort shoes and a name tag above her heart. It’s the white man in a uniform (which he had to pay for) who punches in each day and restocks the shelves of your favorite big-box giant. It’s the Latina home healthcare aide who cares for your mom, the janitor who empties your office wastebasket, the woman who rings up your groceries, and the crew who fix the bumpy freeway you take every day to work.

Yet despite how interwoven this new working class is in our lives, we don’t really know or hear much about it. Its members’ concerns don’t shape the national agenda or top the headlines in major newspapers. Their stories aren’t featured in sitcoms, dramas, or movies. Roseanne got a 21st century reboot, but no such luck for Good Times or Sanford and Son or Alice.

Today, disrespect is baked into working-class jobs in a capitalistic worldview that considers workers as merely costs to be minimized. And that cost-minimization plays out in the form of low pay, miserly benefits, unstable schedules and an overall withholding of dignity by society for their hard and important work.

The declining political clout of the working class and the concomitant degradation of working-class living standards impacts all of us, from pedigreed professional to warehouse worker. Why? Because the philosophy that allows employers to schedule their hourly workers week to week, with little advance notice, is the same philosophy that allows employers to expect their salaried workers to be “on” 24/7, responding to emails and taking conference calls that disrupt family and leisure time.

The policies that stripped away our factories are the same policies that are now yanking professional jobs out of the country. The political hostility toward people who are down on their luck and need help buying food is delivered by the same politicians who drastically cut higher-education funding.

The three biggest threats to the professional middle class are the same culprits behind the degradation of the working class: deregulation, “trickle-down” economics, and antigovernment activism. These forces hit the working class first and hardest, but they inflict plenty of damage on the middle class too.

But forging a new working-class solidarity will require an end to an effective and damaging political strategy: evoking racial anxiety among whites to splinter the working class. From Bacon’s Rebellion to Trump’s Make America Great Again, conservatives have historically pitted struggling white Americans against enslaved and then working-class black Americans to gain political power so they can write the rules in a way that enriches the white and wealthy, and disadvantages struggling people of all races. It is truly a tale as old as time.

But the new working class isn’t sitting on the sidelines. From the Fight For $15 to the Dreamers to Black Lives Matter, movements of, by and for the working class are ascending and winning. In the 2016 elections, voters passed ballot measures raising the minimum wage in Arizona, Colorado, Maine and Washington. The Fight for $15 movement won a $15 minimum wage hike in California, New York, Los Angeles, San Francisco, Seattle, SeaTac and Washington DC.

All told, what began as a scrappy band of fast food workers walking off their jobs in New York City in 2013 has won over $62bn in raises for 19 million workers, according to the National Employment Law Project.

The working class has had a boot on its neck for three decades. While it has borne the brunt of the assault on workers’ rights, all of America has suffered as a result. That’s why the concerns and aspirations of this new working class must be the starting point for rewriting our economic rules. That means putting the needs of America’s wage earners—black, brown, white, immigrant, male and female—at the center of our politics, not invisible in the margins.

Tamara Draut is vice-president of policy and research at Demos and author of Sleeping Giant: The Untapped Economic and Political Power of America’s New Working Class