Capitalism treats blue-collar and white-collar wage earners differently than salary earners. Since the 1980s, anybody who has a non-bullshit job, who is doing actual work, has seen their work downsized, sped up and Taylorized.

May 13, 2018 Dayton Martindale In These Times
printer friendly 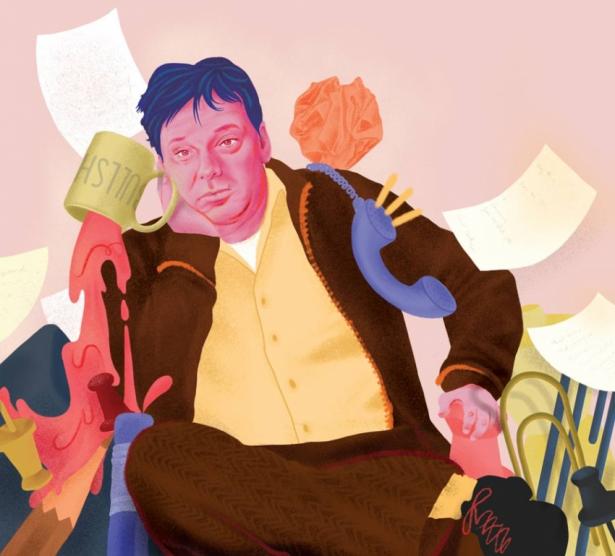 David Graeber had a hypothesis. The anthropologist grew up working-class in New York, and while his scholarship garnered accolades, he’s never felt at home in the world of academia. From his time as a professor at Yale (ended prematurely, he believes, due to his anarchist activism) to his current gig at the London School of Economics, he kept running into professional managers who didn’t seem to do much. Over drinks, some confessed they actually didn’t do much; they spent a few hours a week working and the rest browsing cat memes.

Graeber developed a suspicion that this was rather common and, in 2013, wrote an essay for Strike! magazine, “On the Phenomenon of Bullshit Jobs.” It was just a hypothesis—halfway a joke—but the piece was translated into at least a dozen languages and reprinted all over the internet, where it elicited floods of comments from people saying: “I have a bullshit job.”

A subsequent YouGov survey found that 37 percent of British workers believe their job makes no “meaningful contribution to the world”—more than Graeber expected. So, he dug deeper, soliciting testimonials and researching the political, cultural and economic structures that encourage millions of people to effectively waste 40 hours a week. The result is Bullshit Jobs: A Theory, a playful and provocative take on what he calls “a scar across our collective soul.” In These Times spoke to Graeber about the jobs problem, its causes and the future of capitalism.

How did you determine what counts as a “bullshit job”?

DG: I’m not going to tell anyone who thinks their job is meaningful and important that it isn’t. People weren’t saying, “I market selfie sticks, selfie sticks are stupid, that’s a bullshit job.” They assumed that, if someone actually wants something, then it’s not bullshit. They weren’t judgmental about consumer taste.

A bullshit job is a job that the person doing it believes is pointless, and if the job didn’t exist it would either make no difference whatsoever or it would make the world a better place.

The existence of bullshit jobs seems to cut against the idea that capitalism is efficient and squeezes labor.

DG: Capitalism treats blue-collar and white-collar wage earners differently than salary earners. Since the 1980s, anybody who has a non-bullshit job, who is doing actual work, has seen their work downsized, sped up and Taylorized.

Simultaneously, capitalism has produced endless bullshit white-collar jobs, which are designed to make you identify with the sensibilities of managers. I call this managerial feudalism, whereby they keep adding more and more and more levels of intermediary executives. If you’re an executive you need to have an assistant or else you’re not important, so they hire these flunkies. It has to do with power, really.

It screws up the creative industries. Movies have seven different levels of executives, who all have these complicated titles. They all fuck with the script and everything turns into mush. People point out this is why movies are so bad now.

In universities, you have this managerial class that’s taken over from the professors. They don’t know what the hell professors do. The more distant the managers are from what they’re managing, the more numbers they need because they don’t understand teaching themselves, and as a result we professors have to spend a larger and larger percentage of our time translating our activities into these quantitative terms that they set out.

You would think that somebody would raise an objection to this. It’s quite remarkable actually how you have something that’s such a glaring contradiction in the basic ideology of capitalism and nobody talks about it.

Why else have bullshit jobs been increasing?

DG: There is this rise-of-the-robots logic, this fear that gradually technology is going to throw more and more people out of work. People say, “Look, it hasn’t happened.”

I think it did happen, but they made up these imaginary jobs to keep us working anyway, because we have an irrational economy that makes people work eight hours whether or not there’s anything to do. Can you have a surer sign of a stupid economic system than one in which the prospect of getting rid of onerous labor is considered a problem? Any rational economic system would redistribute the necessary work in a reasonable way and everybody would work less.

It's striking how much people report hating their bullshit job.

DG:  They’re miserable! Two or three people said they kind of like their bullshit jobs, but the overwhelming majority, they’re sick all the time. They talk about depression, they talk about complex illnesses, psychological and physical and immune problems that all clearly have to do with tension and anxiety and depression.

Does this unhappiness indicate something more fundamental?

DG: Psychologist Karl Groos used this phrase, and it always struck me, “the pleasure of being a cause.” When children first realize that when they knock something over, they can do it again in the same way and it will have the same result, there is a kind of pure joy and happiness. This becomes the basis of your sense of agency and sense of self for the rest of your life.

When you deprive children of that agency, they almost feel catatonic. That shows we are creatures who need projects of transforming the world around us. If we can’t do that, we hardly exist.

So this theory of human nature promulgated by economists and right-wing politicians that people basically want something for nothing—that if you just give them money they’re going to laze around and watch TV and get drunk all day—it’s not true.

What are some of the ways out?

DG: I’ve been working with people who’ve become big advocates for a universal basic income. It’s not the only solution, but it conforms with my political instincts. People think that is odd because I’m an anarchist. Why would I want a policy where the government would just give people money? Isn’t that giving power to the government? I say, no.

Besides, they’re unhappy, those intrusive bureaucrats about whom you wonder, “How can they live with themselves?” Well a lot of them can’t. Those guys would be off the hook. They could go form a rock band or restore antique furniture or do something nice.

What drew you to explore bullshit jobs?

DG: I have tended to focus on the ideological strong points of the other side. That’s what my book Debt: The First 5,000 Years came out of— most people think that people who owe money and don’t pay it back are bad. With bullshit jobs, there is the idea that if you’re not working hard at something you don’t enjoy, then you’re a bad person and don’t deserve public relief. Those deeply rooted beliefs are the strongest weapons capitalism has.

The anthropologist’s role is to take things that seem natural and point out that they’re not, that they’re social constructs and that we could easily do things another way. It’s inherently liberating.

Your explanation suggest capitalism is a less totalizing system than some might think.

DG: It’s rapidly transforming into something that might not even be capitalism, though it might be just as bad. When we think of something as totalizing, we assume that to get from one totalizing thing to another you need some kind of fundamental break. But historical change tends to be somewhat gradual and complicated. At what point does the other stuff mixed in with capitalism mean it’s not even capitalism anymore?

And of course the Marxist will say, “Well you’re not thinking dialectically. From 1500 to 1750, people were in a process that was going to lead to wage labor, they just didn’t realize it yet.” And I realized, wait a minute, if that’s the case, how do we know that we are even in capitalism now? Maybe we are already 100 years into a process leading us to something and we don’t even know what it is. By that logic, capitalism could have ended in like 1950, and we’ll only fully know what replaced it in 2175.

Dayton Martindale is an assistant editor at In These Times, and a founding member of Symbiosis. His writing has appeared in In These Times, Earth Island Journal and The Next System Project. He tweets at @DaytonRMartind.